Author Q&A - Brian Cronin: 100 Things X-Men Fans Should Know & Do Before They Die 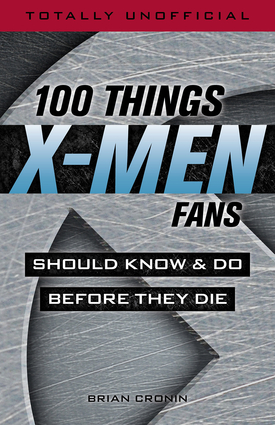 Comic Book Resources' Brian Cronin has collected every essential piece of mutants knowledge and trivia, as well as must-do activities, and ranks them all from 1 to 100, providing an entertaining and easy-to-follow checklist as you progress on your way to fan superstardom in his new book 100 things all X-Men fans need to know and do in their lifetime.

While we don't like to provide spoilers on your reading enjoyment, but amongst those100 things to see and do, this little site gets its own entry. To celebrate the books release, we sat down with Brian for a little Q&A *

[UXN] Were there any facts you discovered during your research that even you were surprised at?

[Brian] One thing that I realized so late in the game that it wasn't even in the original draft of the book (big thanks to my editor, Jesse Jordan, for still getting it into the final book!) was that while I always knew that the X-Men had been, in effect, canceled when it went to all reprint status in 1970, I didn't realize that it had been outright canceled earlier in the year! Presumably, some nice sales reports from the end of Roy Thomas and Neal Adams' run convinced Marvel to not outright cancel the book. If it had been completely canceled, perhaps Marvel doesn't reboot it in 1975!

[UXN]  What is your favourite fact from the book?

[Brian] Oh man, the entire book is filled with facts that I love! That's the whole book! :) Hmmm...I believe the first chapter that I wrote (as a sample to show Triumph what the book would look like) was Paul Smith, in part because he is involved in a few cool X-Men facts, like the fact that it was not until his run that the X-Men actually became Marvel's highest settling title and how Storm's Mohawk came about due to him making a joke about a possible new haircut for her (all based on how Louise Simonson's daughter reacted to Walter Simonson shaving his beard at one point!)

[UXN]  You used UncannyXMen.net during your research for the book, was this the first time you discovered our site or were you aware of us before?

[Brian] Oh no, you guys are great. I'm an early adopter of any comic book related website, so I'm sure I was reading it as soon as I could have been.

[UXN] You are obviously an X-Men fan if you've gone on to produce a book about them. Do you have a favourite character and/or team?

[Brian] It is funny, I'm all about Byrne/Claremont/Austin, but I think that the best lineup was quite possibly the Secret Wars era lineup with Rogue in there. As puntacular as it sounds, I think she really did add a nice, rogue element to the team chemistry.

Hmmm....no, I can't do it. I gotta go with the Days of Future Past lineup (essentially the All-New, All-Different lineup plus Kitty Pryde and Angel). Man, Angel was awful on that team, though.

[UXN]  You have a number of regular articles over at comicbookresources.com, including the popular "comic book legends revealed" series. How long does it take you to research these legends and are you ever worried about running out of them?

[Brian] When I started Comic Book Legends Revealed, I started with a little notepad and I wrote down about 36 ideas, so I thought, "Okay, so three legends an installment, I can do about 12 of these. 12 is a respectable amount." I just finished the 675th one last week. I don't think I'm ever running out!

As for research time, what I try to do is just be  constantly keeping my eye out there for stuff, so I can work ahead and then the piece is mostly researched by the time I sit down to write it. So I guess it's probably a lot of research time, but it doesn't feel like it.

[UXN] You also do legends about sports and the world of entertainment. What inspired you to start documenting and publishing these fascinating facts?

[Brian] I've always had the same interest in sports and entertainment that I've had in comics, so it seemed like a logical extension of the column. It really does easily adapt to other media.

[Brian] I adore the character chronologies. When I'm trying to keep a character's history straight, they're amazingly helpful.

[UXN]  is there anything that you would love to see us tackle on uncannyxmen.net?

[Brian] Someone sent in a legend saying that Roy Thomas, Jean Thomas and John Romita were going to create a new Marvel Girl in 1974. Roy doesn't recall it and now the citation the reader used turned out not to even exist! So if anyone's ever read something like that, that'd be swell to learn. ;)

100 Things X-Men Fans Should Know & Do Before They Die is available now from Triumph Books at their website and all good retailers.

*...ok we sent some emails and he replied