CHILDREN OF THE VAULT 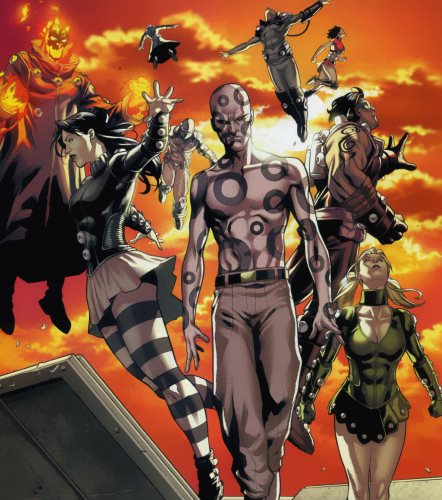 Believing themselves to be the next step in human evolution and the rightful rulers of the planet, the Children of the Vault proved to be powerful and deadly adversaries those who stood in their way. Grown in a lab and segregated from the rest of society, they remained elusive until their existence was accidentally discovered.

Together with a group of other temporal physicists, Dr. Bella Pagan succeeded in creating a device that could speed up time within an enclosed area. Wishing to create a larger version of their mechanism, the scientists and crew of volunteers sailed the Conquistador, a large ship leased by the Chilean government, into international waters to begin their experiment. Their work exceeded their expectations. To the outside world, only a few decades passed, but inside the temporal field on the ship, it had been over six-thousand years. The volunteers had reproduced numerous times and, over the course of many generations, the descendants had begun to develop unique powers. The latest generation, dubbing themselves the Children of the Vault, were neither fully human anymore, nor were they mutants.

Feeling tremendous guilt over what they had done, one of the scientists hired Sabretooth to kill him and the rest of the team. After attacking the group, Sabretooth learned of the Conquistador’s existence and decided to investigate. He found the ship and gained access, just at the exact moment that M-Day hit. Seeing the mutant race on their knees, a Children of the Vault left the temporal field inside the Conquistador to stake their place as the next stage of human evolution. Discovering Sabretooth on their ship, the group attacked him, but he escaped. Not wanting their existence known to the rest of the world, the group gave chase to eliminate the threat. [X-Men (2nd series) #191]

Serafina and Sangre tracked Sabretooth to Nogales in Mexico, only to discover that he had already left the area. Not knowing if he told anyone about their existence, the two blew up the town to cover their tracks, but not before framing the X-Men and leaving a survivor to tell the media. Two of the children, Fuego and Aguja, managed to track Sabretooth to the US/Mexican border, but after a brief confrontation they lost him once again. [X-Men (2nd series) #188] 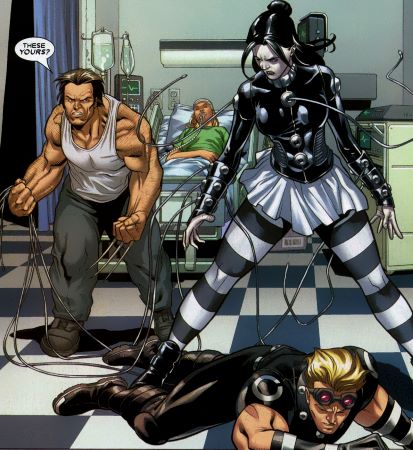 Upon hearing that Sabretooth had sought asylum with the X-Men, Sangre, Fuego, Serafina, Perro and Aguja broke into a SHEILD base, killed all the personnel there and took Northstar prisoner. Brainwashing him, they used him to get to his sister Aurora, who was also subsequently brainwashed by the Children.

Serafina and Perro took the twins to the X-Mansion and set them loose on Sabretooth and the X-Men. Things didn’t go according to plan though and the two were defeated, resorting in Serafina using her cloaking technology to enter the mansion to deal with Sabretooth herself. Before she could find him, though, she became distracted by Cannonball and hijacked Lady Mastermind’s illusionary powers to play with him. Serafina trapped Cannonball in an illusion in which the two of them were married with children. Immersed in her imaginary life, she didn’t notice Wolverine creep up on her and she was forced to flee before having killed Sabretooth. Serafina reported back to Sangre, who wasn’t pleased with her for screwing up the mission. Deciding that he needed to put an end to the problem himself, he ordered the Conquistador to fly into the air and head towards the X-Mansion. [X-Men (2nd series) #189-191]

As the Conquistador entered US airspace, it was attacked by military jets, which Perro and Aguja destroyed with ease. A team of X-Men, led by Rogue, landed on the ship but the Children mounted a counter attack and quickly subdued them. Sangre confronted Rogue and calmly 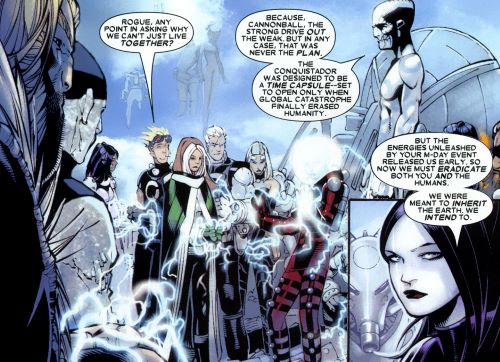 informed her that the mutants’ time on Earth was over and that the Children of the Vault would become the supreme race.

As the Conquistador hovered over the X-Mansion, Sangre gave the order for it to be annihilated. However, before the order could be carried out, the ship’s primary weapon system was destroyed by Cable, catching the Children off-guard. The X-Men fought back and Lady Mastermind used her illusion powers to trick Fuego into killing Aguja, who in turn was killed by Iceman when he froze the fiery man’s body. Cannonball managed to knock Serafina out, whilst Mystique killed Sangre with thermite bullets. With the Children’s leadership defeated and their plan to kill the X-Men thwarted, the rest of the group were forced to retreat.

Having prepared for the chance of defeat, Perro and Serafina managed to escape. The 3,000 other citizens on the Conquistador, however, were teleported away to an abandoned Sentinel factory in Ecuador, and in their place 3,000 animal carcasses were left, with human genetic codes spliced into them. A huge explosion destroyed the Conquistador, leaving the X-Men to believe all on board were killed. Perro and Serafina travelled to Ecuador to meet with Cadena, who would become the new leader of the Children in the wake of Sangre’s death. [X-Men (2nd series) #192-193]

On the Quitado, one of the children named Luz found herself placed in solitary confinement due to insubordination and was to stay there until her powers were needed for the Angelfire. In her desperation. Luz used her light light-based powers to break out of her cell and escape the Quitado, making her way to Earth. Landing in Mumbai, India, she ran into a squad of X-Men being led by Rogue. Lying about her true identity, Luz helped the X-Men when another big EMP hit Mumbai and the area was thrown into chaos. Angered by her actions, Corregidora sent a group of Servidores, who located Luz just as she was meeting with the X-Men. After helping defeat the 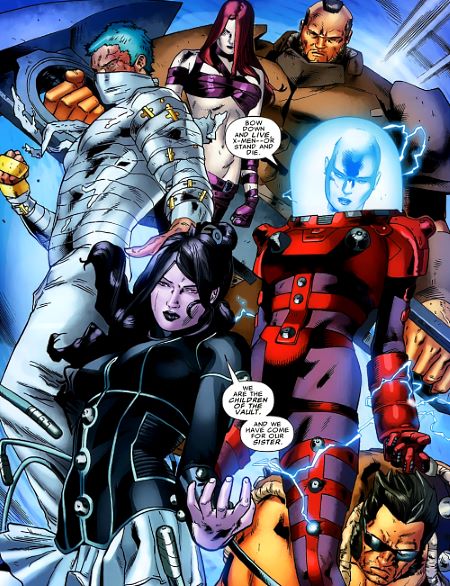 Servidores, Luz went back with the X-Men, where she struck up an attraction with one of the students, Indra. Having monitored the fight, Corregidora recognized Rogue and, blaming her for the death of Sangre and the others months before, decided to assemble a team to kill the X-Men. [X-Men Legacy (1st series) #238-239]

Cadena, Serafina, Perro, and other new Children attacked the X-Men, easily overpowering the team. Luz surrendered herself in return for the X-Men’s lives, but the Children decided to take Rogue and Magneto back to their base anyway. On the Quitado, Corregidora sentenced Rogue to death and the X-Man was taken to an auditorium so that Perro could execute her publicly.

As for Magneto and Luz, Cadena intended that they be used to power the Angelfire device. However, as the machinery was activated, it quickly became apparent that something was wrong. 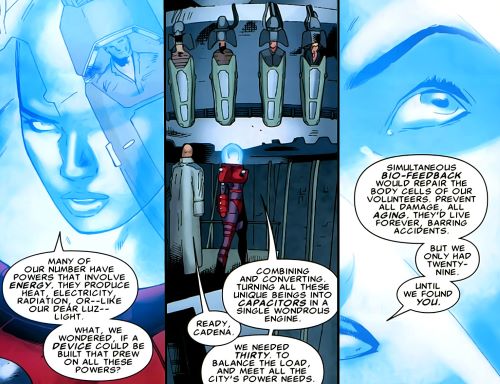 Too late, Cadena realized that Luz had tricked her by using her light-based powers to create a hologram of herself around an ordinary human. With only 29 powered people in the system instead of 30, the jump to Earth didn’t happen smoothly and the Quitado was partially phased with Mumbai. Luz could only watch from Earth, as she remained disguised as an ordinary human. [X-Men Legacy (1st series) #240]

Elsewhere, Rogue was about to be executed by Perro, but in the chaos of the jump she managed to break free and escape, stealing his power and knocking him out too. Martillo, Cadena and Pierra Dura attacked Magneto when he broke free of the Angelfire but he and Rogue were forced to surrender when one of their allies was taken hostage. Feeling guilt over her actions, Luz returned to the Quitado and created a distraction, allowing the X-Men to escape. Olvido and his team found them, but were outmatched by the X-Men. In the end, the X-Men succeeded in turning off the Angelfire, sending the Children and the Quitado back to their inter-dimensional home. [X-Men Legacy (1st series) #241]

Powers: Transform into water in order to collapse into a fluid state or harmlessly absorb and displace physical attacks, condense vapor from the atmosphere to summon water in controlled shapes and forms on command

Notes: Sangre was the team leader of the original group.

Powers: Wide-spectrum detection abilities, allowing her to read bio-chemistry in real time or through residual spore, tracking people's movements and level of exertion, plant thoughts in the minds of others, remotely access transmission frequencies, blackout those transmissions, and physically hack into computer systems to absorb or manipulate data

Powers: Gravitational manipulator able to amplify the pull of gravity to drag his target downwards or redirect the pull to send them flying at terminal velocity in any direction

Last Appearance: X-Men (2nd series) #193 (Incinerated by Fuego, who had been fooled by an illusion from Lady Mastermind)

Powers: Project fields of light for projection or to levitate and transport herself, fire energy discharges that explosively disrupt the molecular structure of her targets

Notes: Drain energy from his environment and convert it into incendiary force, projecting intense heat and flames from his body, and able to sense his surroundings as heat signatures

Notes: Cadena was the leader of the second group of Children.

Powers: Superhuman strength and durability, direct waves of force through his hammer

Notes: Martillo carried around a giant hammer as a weapon

Powers: Absorb directed energy harmlessly into his body through an extra-dimensional tap, redirect energy from that void offensively

Powers: Bio-interface allows her to physically pass into and through living beings, moving past their defenses and causing extremely discomfort

Powers: Harness the random atomic motion of her molecules for kinetic thrust, allowing her to achieve superhuman speed and flight, increased reaction time, durability and perceptual accuity inconjunction with her speed, able to produce a directional photonic discharge when in contact with her brother

Note: Aurora was brainwashed into working for the Children of the Vault and she parted ways with them once the conditioning was broken

Powers: Harness the random atomic motion of his molecules for kinetic thrust, allowing him to achieve superhuman speed and flight, increased reaction time, durability and perceptual accuity inconjunction with his speed, able to produce a directional photonic discharge when in contact with his sister

Note: Northstar was brainwashed into working for the Children of the Vault and he parted ways with them once the conditioning was broken