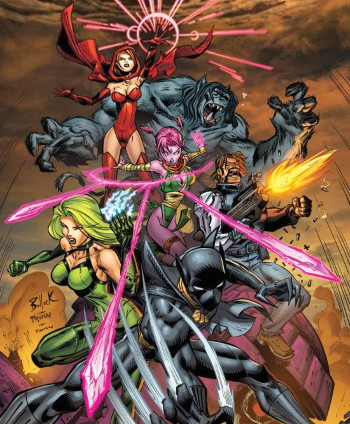 On Earth 8149, Polaris, Lorna Dane, successfully fought Sentinels until a new model, immune to her powers, blasted her. On Earth 763, Beast and Wonder Man battled MODOK until the villain self-destructed in a huge explosion. A version of Black Panther on Earth 1119 investigated a temple before being blasted by Klaw, while Forge sacrificed himself to end the Skrull invasion on Earth 2814. On Earth 8823, Wanda Maximoff, the Witch, ignored Doctor Strange’s pleas as she tried to resurrect her dead brother, before the spell went awry.

All five reappeared in a grassy meadow, with an extra person: Blink. A Timebroker, named Morph, appeared to explained to the group (in his own wacky way) that they had each been plucked from time a moment before their deaths. They were now Exiles, un-stuck from time and tasked with correcting damaged timelines. Blink was provided with a Tallus, a special bracelet that would rely their orders and provide their transport to each universe. Morph provided them with one last glimpse of hope before sending them on their way: if they healed enough worlds they may get a chance to see the world they left behind. [Exiles (2nd series) #1]

The Exiles first mission took them to Genosha, where they were tasked with helping Wolverine overthrow Magneto. Unfortunately, they immediately discovered Logan had been killed and was being paraded through Genosha by Magneto. Together, the team infiltrated Magneto’s royal court, learning more about the history of this world and about each other. Forge, missing his wife Storm, was surprised to learn his teammate Black Panther was in fact T’Chaka, the son of his world’s Storm and T’Challa. Meanwhile, subtle actions from Blink suggested she knew more than she should about the Tallus and their mission. 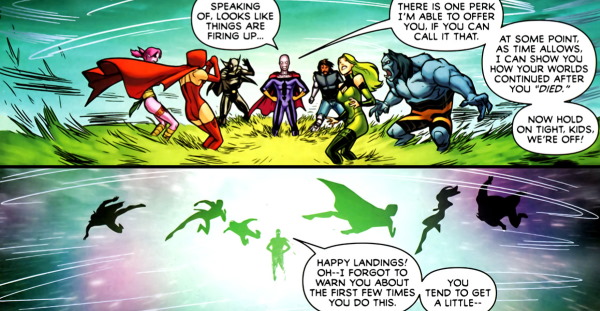 Polaris and Witch stole the places of their counterparts, to better learn about their target. Unfortunately, the group were quickly caught out by Magneto’s telepaths, Jean Grey and Emma Frost, and were incarcerated. Through teamwork, the group managed to escape and convinced Frost and Jean Grey to read Magneto’s mind. Their scan revealed that, while Magneto and Xavier had worked together for mutantkind, Magneto had let Xavier die in order to steal his wife Moira. Although this turned the Master of Magnetism’s followers against him, according to the Tallus this wasn’t enough. For the first time for any Exiles team, the Tallus instructed the team to abort, opening a doorway for them to flee. This seemed to surprise Blink most of all, who in the rush let slip that aborting the mission and the method of teleportation wasn’t normal. However, it was too late, as the team had already moved on to their next mission. [Exiles (2nd series) #1-3]

On their next mission, the Exiles found a world where North America had been wiped out by machines, led by a sentient Cerebro and its lieutenants, Ultron, Vision and Machine Man. Their 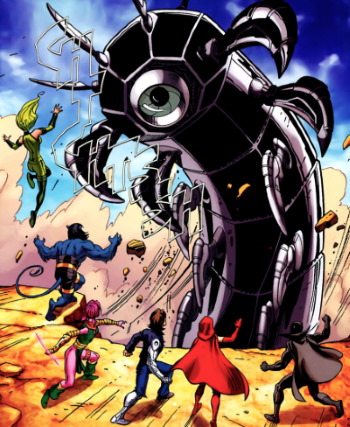 mission: overthrow the machines. The team, except for Blink, were soon captured by Cerebro’s lieutenants, where they learned “Ultron” was in fact Hank Pym in the machine’s body and the androids were actually working against their master. Rather than actually wipe out mankind, they had captured each individual’s lifeforce within various robots so they could be resurrected later.

Meanwhile, as Blink worked to free her friends, it was revealed she was in fact the same Blink that had served with the previous Exiles team, though her current teammates did not learn this. When Blink reconnected with the rest of the team, they set forth on a mission to take down Cerebro. Witch, Black Panther and Polaris created a distraction, while Blink, Beast and Forge infiltrated Cerbro’s mainframe to shut it down. Unfortunately for Forge, his cybernetics allowed Cerebro to take control of him, forcing Beast to step up to hack the mainframe. However, Beast was forced to reveal he lacked the intelligence prevalent among other Hank McCoys. Instead, Hank used brute force to destroy Cerebro’s core, fighting against dwindling oxygen to destroy the computer. With Cerebro destroyed, mankind was able to be restored in new robotic bodies. The new Exiles had completed their first successful mission. [Exiles (2nd series) #3-5]

With their mission completed, the Timebroker offered the Exiles the opportunity to return to their first unsuccessful mission and try again, a choice they readily accepted. While they had caused Magneto to fall from favor, the X-Men and Brotherhood remained allies. In order to save the Earth, the groups had to be drive apart. The Exiles achieved this by having Witch, disguised as her counterpart from that world, reveal to Jean Grey that Cyclops and Emma Frost had been having an affair. This news was enough to drive a wedge between the groups, though with the unfortunate byproduct of causing Emma Frost to kill her world’s Scarlet Witch in retaliation. However, unbeknownst to the rest of the team, that world’s Scarlet Witch had actually swapped places with the Exiles’ Witch and Frost had actually killed their teammate. With her life essentially ruined, the Scarlet Witch secretly took her counterpart’s place amongst the Exiles as they left that world.

Next the Timebroker, Morph, allowed the team time to relax on world before the next mission. Unbeknownst to Blink, the rest of the team had become suspicious that she knew more than she 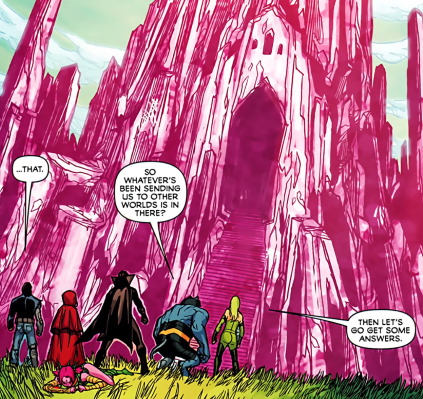 was letting on. Forge created a small device, which, after being planted on the Tallus, diverted their teleport away from their next mission and to the point of origin of the Tallus’ signal, the Panopticron.

In the Panoptichron, the Crystal Palace, the new Exiles learned the truth; that there had been a previous Exiles team, of which Blink and Morph had been members. While Blink eventually retired, Morph stayed on, though his team were soon absorbed by the Crystal Palace, becoming part of its collective unconscious. Morph managed to free himself and, through a connection with the Panoptichron, was able to summon his retired teammates, Blink, Nocturne and Heather Hudson. Together, the quartet summoned new teams of Exiles to continue the mission. During this revelation both groups also learned that a heroic female version of Kang was the original being to be absorbed by the Crystal Palace. Kang explained that no Exile was ever meant to return to their world, as this would only further destabilize the timestream.

Forge was able to arrange for his teammates to view how their own realities after they “died,” giving each of them some form of closure. Beast learned that he could return home if he chose but, as his love Wonder Man was dead, he felt he had nothing to return to. On a more positive note, exposure to the energies of the Crystal Palace revived Hank’s lost intelligence. Only the Scarlet Witch did not view her reality, presumably so that the rest of the team would not learn she was an imposter. 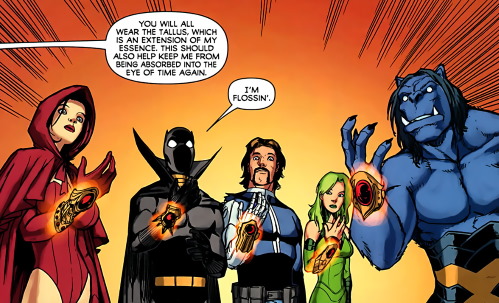 The team established a new status quo; each member would be issued with a Tallus to increase communication and help prevent anyone getting absorbed into the palace. Nocturne also took Blink’s place on the team, so that she could train the next batch of recruits. Now all on the same page, the newest batch of Exiles set forth on their next mission. [Exiles (2nd Series) #6]

While on a mission investigating the realities being destroyed by the Time-Eater Morph, Nocturne and Sabretooth were separated.  Morph bumped into Blink on a world while he searched for his friends, though they were separated moments later when the world was destoryed by the Time-Eater. Meanwhile, Victor was pulled to the Time-Eater's realm by the Tallus to assist Blink in excaping the monster's hordes. Later, following the defeat of the Time-Eater by Blink's Exiles, Morph and Nocturne returned to their regular missions. Unfortunately both fell under the metal sway of Pastor Xavier and became his enforcers.  They were rescued by Blink's Exiles, though unfortuantely Morph was killed in the process. [Exiles (3rd series) #3, #5, #7]

Powers: manifests spatial-shearing ability as teleportation portals or energy shafts focused on her javelins that displace objects upon contact, either teleporting them away disrupting them on a molecular level

Note: Blink is a founding member of the original Exiles

Earth: Beast is from Earth 763

Powers: heightened agility and reflexes, night vision, retractable tail, cling to solid objects, low-level telepathy, extra-dimensional access allows her to fire explosive energy "hex bolts" and merge with the bodies of others to control them

Note: Nocturne is a founding member of the original Exiles

Note: T’Chaka is from Earth 1119. He is the child of Storm and T’Challa

Note: This Wanda comes from the first world the Exiles visited, and supplanted Witch’s place in the team.