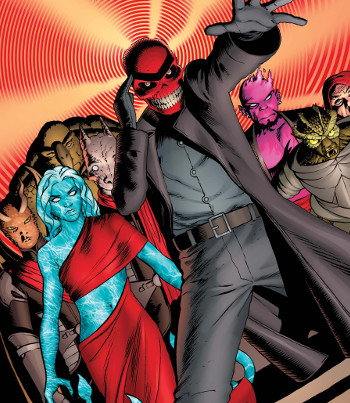 In his role as an opponent to the mutant race, the Red Skull assembled a group of super-beings in mocking defiance of the X-Men, calling them his "S-Men".

The Red Skull clone awoke after seventy years in hibernation to discover a world he found all-too-familiar; a frightened population in decline, looking for someone to blame.  When the Phoenix Five nearly took over the world, and killed Charles Xavier he saw his opportunity.

He set out to recruit a collection of disenfranchised humans each with a reason to hate mutants and provided them with various supernatural items and spells to enhance them. To a young man in Ethiopia he supplied the Crooked Emerald, transforming him into the African turtle good Mzee. Tsar Sultan accepted a curse allowing him to transform into the demonic Insect at will. Fei Lian was supplied a magical bag containing living wind  The origins of the other’s abilities are unknown, though presumably the Skull released the Dangerous Jinn from an enchanted item.  Parodying the X-Men’s name, who were named for Charles Xavier, the Red Skull named his team the S-Men.

Continuing the mockery of X-Men, the Red Skull built a School for Gifted Humans in an unknown location, complete with a multiregional training facility. 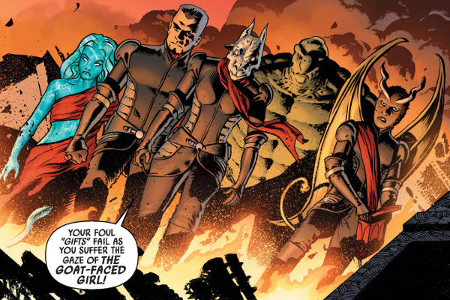 With his team assembled the Red Skull launched the next stage of his plan.  The Skull kidnapped and brainwashed Dancing Water’s father, Avalanche and sent him to launch a deadly attack in New York, then commit suicide. Meanwhile Mzee, Dancing Water, Tsar Sultan, Fei Lian and the Goat Faced Girl were sent to the Jean Grey School for Higher Learning to steal the corpse of Charles Xavier. They also attacked and kidnapped Rogue and the Scarlet Witch. [Uncanny Avengers (1st series) #1]

The Red Skull desecrated Xavier’s corpse, removing the mutant’s brain and fused it to his own to steal his vast psychic abilities. He immediately set to using his abilities to corrupt the Scarlet Witch into using her abilities to help wipe out humankind. He also set Honest John, the Living Propaganda, on to the news where he used his persuasion abilities to convince Americas to unleash atrocities against mutants.

Meanwhile Dancing Water and Mzee attempted to feed their prisoner Rogue, but the woman escaped by stealing Dancing Water’s abilities. She didn’t get far however, as the S-Men recaptured her and the Red Skull mind controlled both prisoners into serving him. [Uncanny Avengers (1st series) #2] 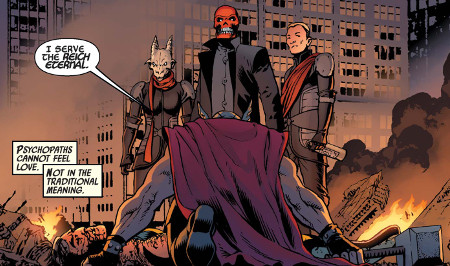 Soon after, the Red Skull launched his assault on New York City. With his telepathic abilities he drove the New York’s humans in a mutant killing frenzy while his S-Men aided in hunting down and killing mutants. This brought them into conflict with the newly formed Avengers Unity Squad.  Captain America took down Dangerous Jinn, and Thor knocked out Mzee before falling under Honest John’s sway. While Wolverine managed to sever the Skull’s hand, the Goat-Faced Girl sapped his powers and the mind controlled Thor took him down before her could cause further harm. 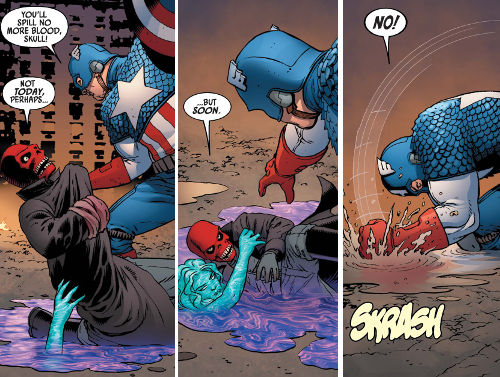 Though the battle had largely gone well for the S-Men, the combined efforts of the Avengers managed to force the Red Skull to flee, using Dancing Water's teleportation abilities, leaving their prisoners, Rogue and Scarlet Witch, behind. [Uncanny Avengers (1st series) #3-4]

The Red Skull bided his time while the Avengers were distracted with other matters.  When Captain America brought Arnim Zola’s daughter Jet, into this dimension the Red Skull attempted to telepathically recruit her into the S-Men. He connected with the girl and allowed Tsar Sultan to first approach her on the psychic plane. Sultan told the girl about his history, before introducing her to the Skull. The girl rejected the villain’s offer to join them and fled the psychic realm. [Captain America (7th series) #16]

While laying low, the Red Skull had been busy. Using his vast psychic abilities he gathered a dossier of files on all the crimes mutants had committed, which he planned to use to fan the flames of hatred.  He and his S-Men also built mutant internment camps on Genosha, with the aid of Ahab. His forces started rounding up mutants and locking them in the camps.

The S-Men were sent to gather their prime targets and attacked and captured Havok, Rogue and the Scarlet Witch.  Soon after, Magneto snuck his way onto Genosha, intending to murder the Red Skull.  However the S-Men intercepted the mutant and together overwhelmed him.  Given his history with the man, Mzee was given the task of torturing Magneto and did so happily. 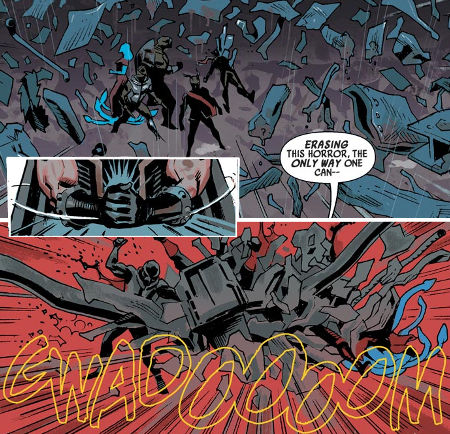 Unfortunately for the S-Men, the Avengers escaped their bonds and freed Magneto. Together the group fought against the Red Skull, Ahab and the S-Men. In a rage Magneto gathered a large mass of metal and crushed the majority of the S-Men to death.  Only Honest John was confirmed as escaping death. The fate of Dangerous Jinn and the unnamed monk is unknown. [Uncanny Avengers (1st series) #23-25, Magneto (2nd series) #9-10]

Notes:  Dancing Water is Avalanche’s Daughter. The origin of her powers are unknown

Powers:  Aquamorph comprised of living water, able to flow in a liquid state, project pressurized streams, and teleport herself and others by passing instantly between any surface of water

Notes:  While Dangerous Jinn was present at Genosha when Magneto killed the other S-Men, he was not depicted amongst those killed.

Powers:  Mythical genie able to fly in a stream of fire and hurl fireballs

Powers:  Neutralizing gaze inhibits the mutant powers of others

Powers:  Projecting influence enables him to persuade others to accept new ways of thinking, by appearing to them as their ideal leader

Notes: It is unknown whether the origin revealed in Captain America (7th series) #16 is true or part of the psychic manifestation used to recruit Jet Zola

Powers:  Bonded to a mystical entity called the Insect, whose form he assumes with augmented strength, exoskeletal armor, and hand spikes to release "Cassandra Toxin", exposing victims to their greatest nightmares

Powers:  Bonded to the Crooked Emerald and Mzee, African Lord of Physical Will, giving him a mutated body with superhuman strength, endurance, resistance to physical injury, and claws

Notes: The Red Skull IV is a clone of the original Red Skull

Notes:  The monk was never named and only spoke in one scene. His words implied he had the ability to speak to the dead.

Notes:  This version of Ahab is from a different timeline to the Days of Future Past version.

Powers:  Cybernetic limbs augment his strength and reflexes, generates energy harpoons that can stun, paralyze and kill others.