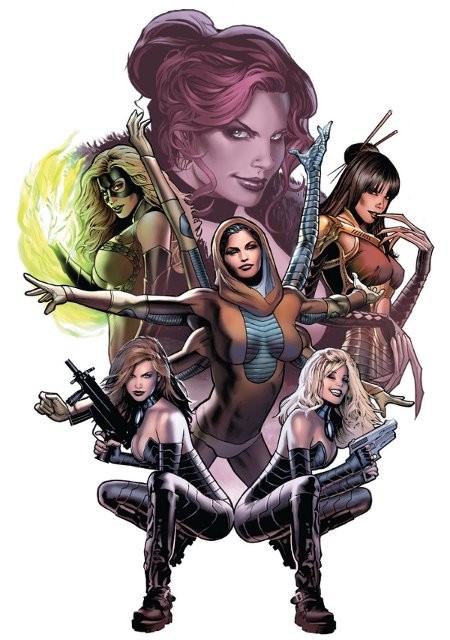 When Madelyne Pryor attempted to find a body for her incorporeal spirit, she assembled a team of the X-Men’s most deadly villainesses to help her do her bidding.

Powers: Post-human insubstantial psionic entity able to manifest powers of telepathy, telekinesis, teleportation, and material/spiritual manipulation to restore dead tissue and control the transmigration of souls, effectively bringing the dead back to life.

Powers: Telepathic abilities allow her to assimilate the thoughts and memories of others, stimulate different portions of their brains to elicit reactions such as fear, hatred or lust, and incorporate these manipulations into psychic illusions to create elaborate and convincing false realities.

Powers: Cast ectoplasmic dragons from her hands that can lift and manipulate matter or strike with psychic poisons and a neuroelectric charge when they "bite".

Powers: Telepathic abilities allow her to probe the thoughts and memories of others, induce specific reactions such as hallucinations, unconsciousness, or a fugue state, formulate psychic illusions that create elaborate and convincing false realities, and resist other forms of mental manipulation.

Powers: Telepathic and telekinetic abilities, often expressed through a psychic knife or katana that serves as the focused totality of her powers.

Note: Psylocke was the only member of the Sisterhood to be brainwashed into joining.