The man known only as Ord grew up on the brutal and warloving planet called the Breakworld. Despite their warrior culture, the Breakworld also possessed advanced technologies, well beyond those of Earth. Furthermore, his people possessed “augars” psychics that could see brief glimpses, or “timeshadows,” of the future. These timeshadows provided the Breakworld with a vision of their doom; their world would be destroyed by a mutant, most likely an X-Man. 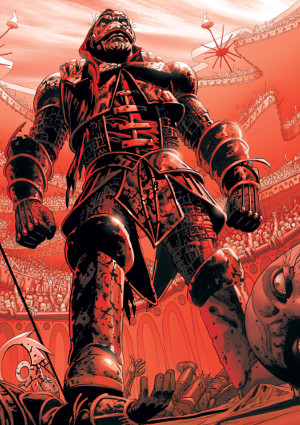 For years, Ord fought hard in an arena in a trial by combat, eventually winning the right to declare war on Earth and destroy mutant kind. However, upon reaching Earth, he was intercepted by Agent Brand and the Sentient Worlds Observation and Response Department, or “SWORD.” Not wanting a war with the Breakworld, Brand negotiated a compromise. Using his people’s advanced technology, Ord would develop a cure for mutant kind, and SWORD would not interfere.

Ord’s first step in this plot was to abduct the body of the recently deceased X-Man, Colossus, swapping his body for a copy, which was subsequently cremated. As Colossus had sacrificed himself to metabolize the Legacy virus cure within his body, his corpse was essential to Ord in developing the mutant cure. Using his technology, Ord easily resurrected the X-Man and held him prisoner for experimentation.

Next, he approached renowned genetic researcher, Doctor Kavita Rao, and provided her with the advanced genetic knowledge of his people, along with Colossus’ genetic material. With Ord’s influence, Rao would develop a cure for the mutant X-gene. [Astonishing X-Men (3rd series) #4-6]

After months of work, Doctor Rao developed a viable cure. While the doctor announced the cure 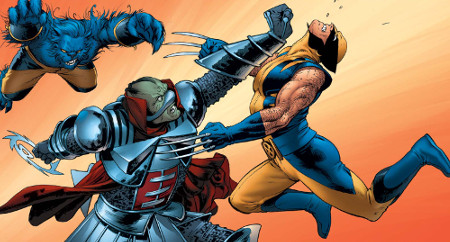 to the world via a press conference, Ord staged a hostage scenario at a charity gala to flush out the X-Men and distract them from the news. Ord’s years of combat training allowed him to fare very well against the X-Men, making short work of each member of the team, until the X-Men’s dragon ally Lockheed surprised him and badly burned his face. Defeated, the warrior angrily fled. [Astonishing X-Men (3rd series) #1-2]

Enraged and humiliated with his defeat, Ord abandoned the long game he had been playing and launched a head on assault on the X-Men. Loaded up with the cure, Ord infiltrated the X-Mansion, intending to cure, and likely kill, the X-Men. Unfortunately for Ord, the X-Men had left to investigate Rao’s organization Benetech. Frustrated and wanting to leave the X-Men a message, the alien used his weaponized cure to depower young student Wing and left him to die. [Astonishing X-Men (3rd series) #3-4]

Ord returned to Benetech and intercepted the X-Men. However, in that time, the mutants had 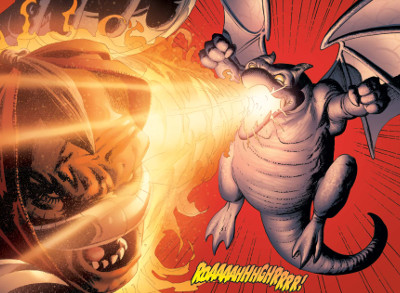 discovered their comrade Colossus was alive and being held captive. Enraged by his captivity and torture, the X-Man attacked Ord and beat him badly. Before the X-Men could do anything with their new prisoner, however, Agent Brand and Nick Fury of S.H.E.I.L.D arrived and informed them the Breakworlder had diplomatic immunity.

Ord made his escape soon after, and kidnapped Doctor Rao’s young ward, Tildie, as a hostage in the process. With his ship stored underneath Benetech, his flight destroyed the facility during his launch. However, he didn’t get far, as Wolverine made it on board his ship and forced him to land. For his actions, Ord was taken into custody by SWORD. [Astonishing X-Men (3rd series) #5-6] 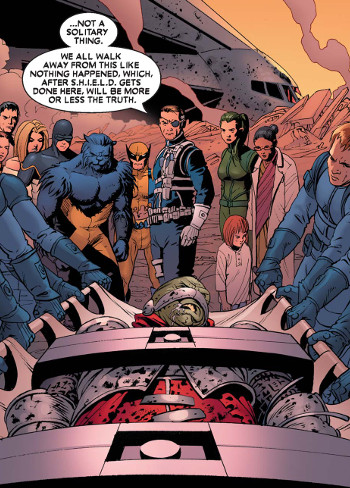 Ord’s incarceration was brief, however. Soon after his capture, he was approached in his cell by another new foe of the X-Men, the sentient Danger Room. Danger recognized the pair were alike and shared common goals. She facilitated his escape, releasing him from his cell so he could leap his way through a window into deep space, before hitching a ride on the android’s shuttle. [Astonishing X-Men (3rd series) #15-16]

During his imprisonment, Ord’s people had made a breakthrough in their “timeshadows” and identified the specific mutant that would destroy the Breakworld; Colossus. Learning the one mutant he resurrected would be responsible for the destruction of his world drove Ord into a maddening rage. Together with Danger, he raced to the X-Mansion to kill Colossus and save his world.

Their timing couldn’t have been more unfortunate for the X-Men, as the pair attacked in the middle of an attack by Cassandra Nova. However, the pair had difficulty locating they quarry in the chaos and Ord instead ended up briefly battling X-student Hisako, who sought vengeance from what he did to her friend Wing. Despite his battle prowess, Ord would have been defeated to if not for Danger’s intervention. Ultimately, both Ord and Danger were subdued by Beast magnetically restraining the pair.

Just as they escaped and launched another attack on the X-Men, a SWORD ship appeared and beamed everyone in the room onboard. Abigail Brand, had decided to sort out Ord and his 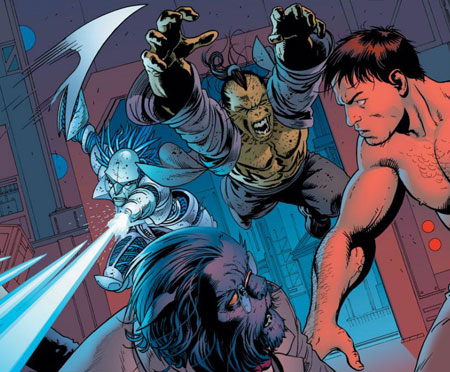 Breakworld situation once and for all, so she took everyone involved to the planet. [Astonishing X-Men (3rd series) #17-18]

SWORD promptly subdued the Breakworlder and held him prisoner on board the ship, but not before he managed to briefly break free and contact his homeworld, warning him their destroyer was coming. However, Ord had unknowingly played right into Agent Brand’s hands. As the Breakworld had identified their prophesized destroyer, Brand fully anticipated them sending their armada to destroy the Earth. Instead, Brand intended to bring Colossus to them and Ord’s call resulted in diverting the fleet away from the Earth. [Astonishing X-Men (3rd series) #19] 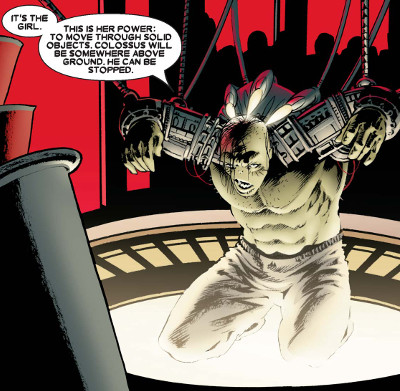 partially destroyed it. While Ord was locked away on the main ship with Danger, Brand and the X-Men escaped to planetside, hidden in the fallen debris. Rather than rescue, Ord received capture and ridicule by his people for his failings. Powerlord Kruun, the supreme leader of the Breakworld, considered Ord an incompetent failure deserving of death, but kept him alive and imprisoned in case he was of further use. [Astonishing X-Men (3rd series) #20]

During Ord’s incarceration, further details of the prophecy had come to light. Within Kruun’s fortress lay an energy reactor which drew power from deep within the Breakworld’s core. As it happened, only Colossus’ organic metal could safely enter the reactor and remove the core, destroying Ord’s planet.

Having been locked up in Kruun’s fortress, Ord was front and center when SWORD and the X-

Men attacked, and Powerlord Kruun was captured. Despite being mocked and imprisoned by Kruun, Ord’s sense of duty and honor drove him to break free and he fought desperately to rescue his leader. He blasted the X-Men’s ally, Aghanne, and attempted to stop Colossus from entering the planet’s power reactor, but failed.

Aghanne, a rebellious Breakworld woman who despised her brutal society and preached compassion, had falsified the prophecy and orchestrated a plot to destroy her own world. By calmly manipulating everyone, Aghanne had worked events until Colossus was exactly where she wanted. Furthermore, she controlled the augars, the Breakworld’s psychics who read the timeshadows. Presumably, through the augars, Aghanne had known Ord would resurrect Colossus and all his actions on Earth that would direct the X-Men to the Breakworld.

When Colossus confronted Aghanne about her plan within the energy reactor, the pair fought and the woman overpowered the X-Man and attempted to force him to remove the core. Meanwhile, outside the reactor, Ord believed the great destroyer, Colossus, was about to destroy his world.

He charged into the reactor, without the protection of a radiation suit, and discovered Aghanne forcing Colossus to destroy the core. Though burning alive has he did so, Ord removed Aghanne’s helmet, distracting her long enough for Colossus to destroy her suit, causing her to burn to a cinder.

As he also succumbed to the effects of the reactor, literally burning alive into ash, Ord was comforted by his former prisoner, Colossus. If he managed to hear them, the last words spoken to Ord were assurances that he had achieved his mission: he had saved his world. [Giant-Sized Astonishing X-Men #1]

In What If? Astonishing X-Men #1, Ord opts to resurrect Jean Grey rather than Colossus for his 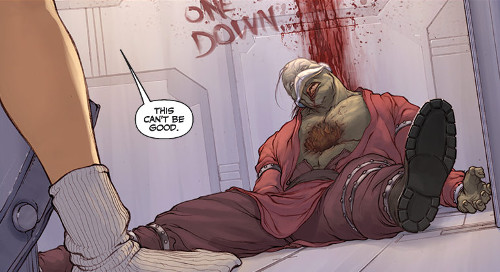 cure, which sets off a very different chain of events. Ord himself becomes a prisoner of the X-Men and is soon murdered by the Phoenix-possessed Emma Frost. Frost then destroyed the Breakworld, the very event Ord was trying to prevent. In the end, Frost was freed by Jean Grey, but not before she killed several X-Men.