• Soul vampire able to drain the animating spiritual
energy of others with a touch, aggressively
weakening her victims to the point of death, while
revitalizing herself with increased strength,
regenerative powers and extra longevity

The origins of the woman known as Sapphire Styx are unknown. She is presumably a mutant, based on her powers, but her real name and place of origin are a mystery. Even her true age is 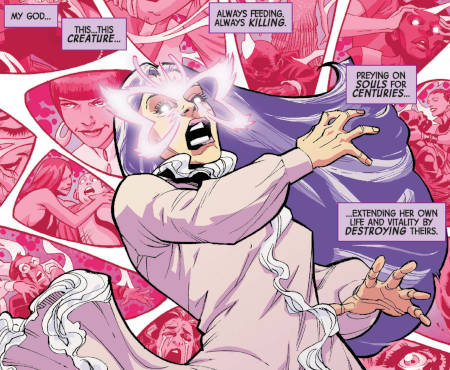 suspect, considering the rejuvenating nature of her abilities, although she is at least centuries old. She has always been a predator, sustaining herself for generations by feeding off of the souls of others, with no regard for human life. The souls of her victims retain a semblance of consciousness on her astral landscape, imprisoned for all eternity as their spiritual energies are slowly metabolized away by Sapphire Styx in her endless pursuit of maintaining her youth and beauty.

Under unexplained circumstances, she made the island nation of Madripoor her home and 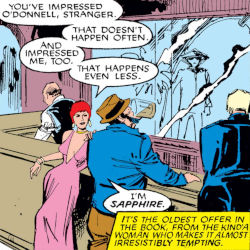 became an agent of the local crimelord, Roche. On Roche's behalf, Sapphire infiltrated the regulars at the Princess Bar, becoming one of the owner O'Donnell's people. Roche was being challenged as crimelord of Madripoor by an upstart known as the Tiger, who had rumored ties to the Princess Bar. One night, Roche's punkboys roughed up the clientele, threatening O'Donnell to fall in line. Sapphire played the part of the helpless victim along with the bar's other patrons and staff. The henchmen were interrupted by Patch (secretly Wolverine of the X-Men), who had found one of the Tiger's dying lieutenants and swore to get involved. Patch easily dispatched the half-dozen thugs and sent them packing. 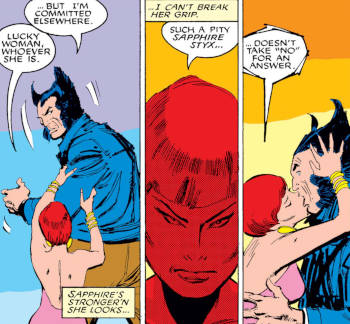 As O'Donnell welcomed Patch for his help, Sapphire attempted to show the stranger her own hospitality. Patch declined, but had a run-in on the streets with Tyger Tiger, formerly a banker from Singapore named Jessan Hoan. Tyger surprised him and threw Patch for a loop, leaving him off balance when Sapphire Styx approached him again. With her surprising strength and vampiric kiss, Sapphire got her hands on Logan and began draining his strength. She got a rush off of Logan's mutant healing factor-supported life energy, and quickly reduced him to unconsciousness.

Back at Roche's cliffside villa, Patch awoke in the crimelord's dungeon torture chamber. Sapphire revealed herself and kissed him again, eagerly drawing upon more of his energy. She reluctantly stopped and left him alive but pliant to the questioning by Roche and his Inquisitor. Despite Sapphire's ministrations and the Inquisitor's eager work, Patch managed to free himself and escape for a time. He later returned with Tyger Tiger to free O'Donnell, after Roche and Sapphire captured him under the assumption that HE was the Tiger. 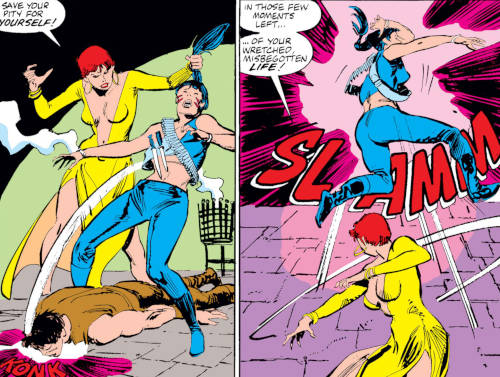 During their infiltration, Sapphire Styx was feeding on O'Donnell when Tyger Tiger entered the dungeon. The Tiger shot Sapphire to separate the two of them, but became distracted by the Inquisitor. Shrugging off the gunfire, Sapphire one-handedly pulled Tiger off the Inquisitor and struck her against a wall before trying to drain Tyger Tiger as well. The Tiger marshaled her strength and broke Styx's grip with a savage thrust, biting Sapphire on the neck. She then struck the vampire again with a red-hot poker from the Inquisitor's implements, burning her face. Horrified at the damage to her beauty, Sapphire Styx encouraged the Inquisitor to abandon the villa and get her to safety. [Marvel Comics Presents (1st series) #1-9]

In the years that followed, Tyger Tiger consolidated her position as Roche's successor and crimelord of Madripoor, with Patch as her frequent ally. Because of their past confrontations, Sapphire Styx became the closest thing to an outlaw possible in the lawless Madripoor. She attempted to steal a treasure box from Tyger's couriers to profit from it. The box belonged to the Clan Yashida, however, ensuring Wolverine's interest in its recovery. Styx tried again to seduce Logan when he caught up with her, but he was having none of it. Sapphire was beaten and captured by Logan, who turned her over to Tyger Tiger for none-too-gentle treatment. [Marvel Comics Presents (1st series) #131]

Control of Madripoor continued to fluctuate as time went on. While Tyger Tiger managed to stay on top, Sapphire Styx became an agent of one of her competitors, Madame Hydra alias Viper. While working for Viper, Sapphire and the Femme Fatales were hired by Soteira to interfere with the X-Men's efforts to find the recently-resurrected Wolverine. Sapphire and Mindblast captured Magneto, weakening him with Sapphire's touch and Mindblast's augmented psychic powers. Mindblast was then able to pose as Magneto when Kitty Pryde and a team of X-Men arrived in Madripoor looking for information on Logan. 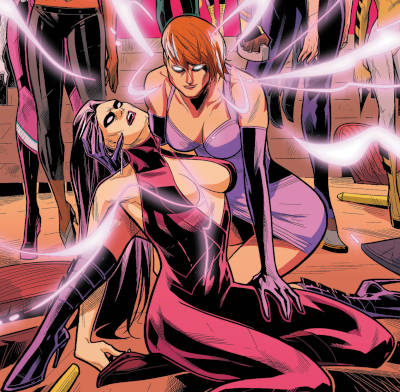 When the Femme Fatales ambushed the X-Men, Sapphire Styx got her hands on Psylocke and found her soul energy delicious. Psylocke was captured along with Storm and Rogue, as the Femme Fatales prepared to transport their prisoners to Soteira via rocket. Even the nihilist Viper was leery around Sapphire Styx, whose appetite for living energy had apparently grown. Sapphire got too greedy with her plaything, however, and drained Psylocke's soul past the point of death.

Having the complete soul of a powerful telepath in her astral landscape proved to be a very bad idea for Sapphire. Psylocke's spirit found the lingering remnants of Logan's soul from the times Sapphire kissed him in the past, and she empowered him to manifest in the real world as a ghost only Sapphire could see. Patch's spirit tormented Sapphire Styx as she wrestled with her own sanity, especially when their connection proved potent enough for the 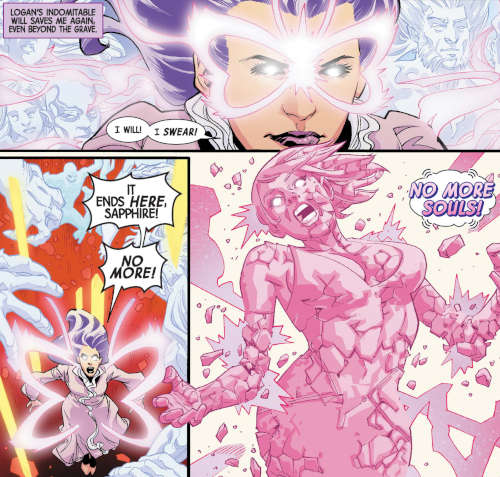 spirit Patch to physically touch and strike her. Ultimately, like a butterfly from a chrysalis, Betsy Braddock's soul was too powerful for Sapphire to contain. Psylocke erupted forth from Sapphire Styx, eradicating the vampire's physical form and releasing the spiritual energy she had stolen from so many over the centuries. What remained of Sapphire Styx was reconstructed by Psylocke into a duplicate of her original body, leaving Sapphire as less than dust in the wind. [Hunt for Wolverine: Mystery in Madripoor #1-4]