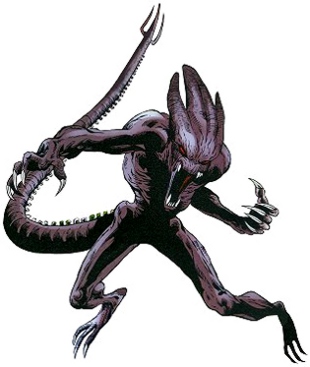 Much of the N’Garai culture is shrouded in mystery but they appear to operate with a hive-like society. Like an ant colony or the Brood, the majority of the N’Garai are warrior-types designed to fight and defend. These N’Garai are typically the size of large African cats and come on a variety of colors, like grey, red and green. They possess elongated heads, sharp teeth and powerful three-pronged tails. Their legs are shaped like a dogs and come complete with poison-laced claws. They have an ability to withstand most mutant powers, although they have been affected by Pixie’s hallucinogenic dust. Fire and extreme heat has also been shown to be a particular weakness. Their mere presence seems to emanate an unholy fear in any who come across them and they appear to have the ability to devour souls.

Higher up the chain are the generals who lead the armies of warriors. Only Kierrok and Mabdhara have been seen so far and they both differ drastically in appearance. Kierrok is bright red and is much larger than the warriors. He also has wings, unlike the warriors, as well as only has a single eye. Mabdhara resembled the warriors more in color and appearance but was still much larger.

Once, a future version of a N'Garai once emerged from a cairn in Limbo. This specimen was covered from head to tail in massive spikes and armor, though it still shared vulnerability towards fire and extreme heat like his ancestors.

Many millennia ago, before even the Hyborian age of Conan, Earth was ruled by the N'Garai. A race of demonic-looking creatures, the N'Garai's reign was one of terror as they treated humanity as their slaves and their prey, bringing out the worst in them. The N'Garai were either the actual offspring of or created by the Elder God Chthon (brother of the Earth Goddess Gaea) who like most of these Elder Gods who were birthed by Earth and later descended to evil. So while referred to as Elder Gods by some, the name does not actually fit the N'Garai.

There are several different stories of how the N'Garai were banished to another dimension. Whether it was a host of angels led by Lucifer before the fall, by the hands of the Demogorge (an offspring of Gaea who banished several Elder Gods who had gone evil), by other gods or by human mages, banished they were to another dimension. They were sealed in there with stone cairns carved with mystical symbols, like the one such cairn found on the Xavier estate. The N'Garai are, however, bent on reconquering the planet and consider humans as meat that must be eliminated. [Deadly Hands of Kung-Fu #19, 22, Marvel Preview #7]

The X-Men's first encounter with the N'Garai came shortly after the death of teammate John Proudstar, the original Thunderbird. Grief-stricken and angry, Cyclops was wandering the mansion grounds when, in a fit of rage, he shot an optic blast into some trees. Unbeknownst to him, the blast hit a pillar with some ancient designs on it. The column was actually a portal to the N'Garai dimension – one of the many that existed around the world – and as soon as it was hit it began to glow and disappeared. 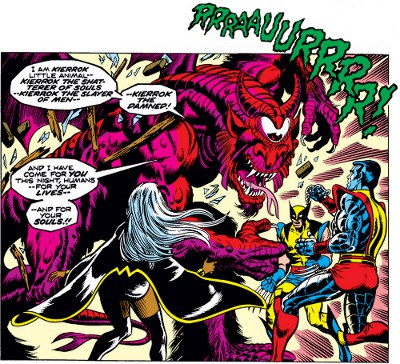 From the cairn emerged the then N'Garai leader Kierrok, who easily bested the X-Men's leader, throwing him through a window. Entering the mansion, Kierrok proclaimed that he was: Kierrok, "the shatterer of souls, Kierrok, the slayer of men, Kierrok the damned." He also claimed to have come for the X-Men's souls. The X-Men fought him but he seemed to be immune to all their powers. Worse, his very presence drained their energy. It was only when Wolverine flew into full berserker mode that Kierrok was defeated. Nevertheless, Kierrok simply regenerated stronger than ever. Using a mental probe, the Professor determined that they must seal the cairn to cut off Kierrok's power and sent Storm off to destroy it. Though she met resistance when she attacked by smaller demons emerging from the cairn, Storm managed to lash out with a bolt of lightning, destroying the portal. Back at the mansion, though had Kierrok disappeared with the cairn’s destruction, the Professor worried that they had not seen the last of these demons. [X-Men (1st series) #96] 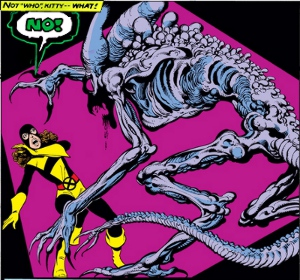 A few months later, on Christmas Eve, another N'Garai emerged from the ruins of the cairn, presumably having survived the X-Men's earlier fight with Kierrok. It attacked and killed a human couple that was nearby and then headed towards the mansion, where Kitty Pryde was alone. After a chase that destroyed a big portion of the mansion, during which she found that her phasing power didn't protect her, Kitty lured the demon into the Danger Room. Even the Danger Room's defenses proved to be no match for the demon however. Kitty finally managed to kill the demon by burning it to a cinder with the afterburners of the Blackbird. It was the first incident that demonstrated the N'Garai's weakness against fire. [Uncanny X-Men (1st series) #143]

Years later, Wolverine ran across a N'Garai scout on the mansion's grounds and he and Nightcrawler chased it back into the reconstructed cairn. Havoc ensued in the N'Garai dimension (with Logan's savagery in fighting the N'Garai possibly inspiring a slave cast called the Ru'tai), but the pair of X-Men eventually traveled back to Earth and Kierrok closed the gateway behind them. The Shatterer of Souls alluded to a coming ""demonic transmigration" for the N'Garai. [Wolverine Annual '95]

The events Kierrok alluded to occurred a short while later when some X-Men joined their friend Lee Forrester, who was investigating some disappearances of sailors in the Bermuda Triangle. Wolverine, Psylocke and Beast stumbled onto the strange island that had been their headquarters for a short while, a certain temple on the island being linked to Belasco's Limbo. Having formed an alliance with the undead Bloodscream and imprisoning the seamen Lee was looking for, Belasco planned to enter the N'Garai dimension and use a magical crystal to enslave them and turn them into his own personal army, so as to invade Earth. The X-Men thwarted his plans with the help of Bloodscream, once he realized that he had been duped as Belasco had told him that he meant to protect Earth from the N'Garai. Belasco ended up being sucked into the N'Garai dimension without the crystal. [X-Men Unlimited (1st series) #9]

Months later, when other strange creatures called the Ru'tai attacked Wolverine, the X-Men learned that the N'Garai had been overthrown by the Ru'tai slaves they had oppressed for years. They also learned that Kierrok had been killed for good since the Ru'tai named Pilgrimm wore Kierrok's eye in a chain around his neck. Apparently even in death, the eye of Kierrok gave its bearer enormous amounts of power. [X-Men (2nd series) #75]

The N'Garai, however, were not content to be conquered and soon teamed up with Belasco to open a cairn in Limbo, from which they could then launch assaults on any dimension, at any time. For this plan, Belasco tricked Shadowcat into performing a spell that gave five N'Garai the forms of the second generation of X-Men - Storm, Banshee, Nightcrawler, Colossus and Sunfire. They in turn went to collect the souls of four more X-Men: Archangel, Iceman, Polaris and Beast, filling a talisman with bloodstones for the plan's final ceremony, to shatter the walls between the N'Garai dimension and Limbo. Throughout the ordeal, the Ru'tai named Pilgrimm tried to stop the N'Garai from obtaining the bloodstones.

Other X-Men where drawn into the fray as well: Psylocke, Thunderbird III, Wolverine and Phoenix. These last three handled the invading demons in Limbo while the mysterious new Magik and Shadowcat defeated Belasco. During the invasion, Thunderbird III killed a spike-covered N'Garai that apparently came from years in the future (quite possibly as the laws of time in Limbo are different). After Belasco's spell was broken, the N'Garai got sucked back into their dimension. [X-Men: Black Sun #1-5]

It turned out Kierrok wasn’t as dead as everyone thought, as he had found his way back into the world in the unassuming place of Abergylid, Wales. Using another cairn as a portal, he brought through a great number of lesser N’Garai minions and had them scour the nearby town for food. He cast a spell over the demons, making them invisible so that they could take the townsfolk without arousing suspicions. Unfortunately for Kierrok, one of the X-Men’s students, Pixie, had returned back home to the town. Investigating the disappearance of some of the locals, she discovered a couple of N’Garai stalking some children. She fought them off and killed one of the demons, alerting Kierrok to her presence. Pixie discovered the source of the demons coming from some nearby mines and decided to take them on herself. She was easily subdued and would have been killed had it not been for the timely arrival of the X-Men, whom she had alerted to the situation earlier. They freed the imprisoned townsfolk, fought Kierrok and caused a cave-in, burying the cairn and Kierrok with it. [X-Men: Pixies and Demons] 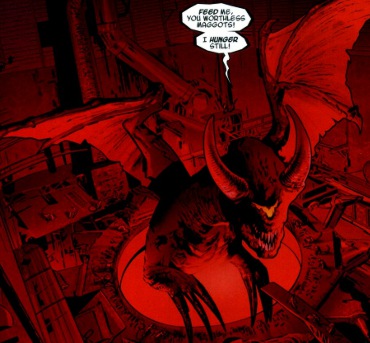 The cairn on the ground at the Xavier Institute was inadvertently destroyed when Rockslide absorbed the stones on it into his gestalt form. The N’Garai immediately took the opportunity to escape their realm and attacked the students at the school. Whilst the majority of the N’Garai warriors were easily beaten, their sheer numbers started to overwhelm the X-Men. Things got worse when one of the larger N’Garai generals, Mabdhara, came through the portal too. He was soon killed by Rogue, though, who had absorbed a great number of students’ powers. With their general dead, the rest of the N’Garai fled back to their own dimension and the cairn was once again sealed up. [X-Men Legacy (1st series) #260.1]