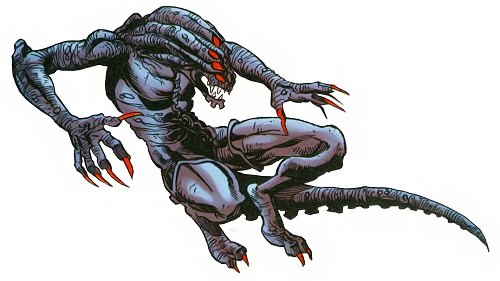 The Ru'tai bear a similar appearance to their former masters the N'Garai. They are large gray creatures and so far two variants have been observed.

The more common Ru'tai "mongrel" is slightly bigger than a human, walks on all fours and has dog-like hind legs. They possess extremely large mouths in a pointed snout, filled with sharp teeth and lip piercings. They also have opposable thumbs and are able to employ sorcery through their claws that retards a mutant's power. They are covered in purple and red tattoos and sport a heavy amount of jewelry; this doesn't seem to affect their agility at all. The small amount of hair on their heads is braided and they have long goatees.

"Evolved" Ru'tai such as Pilgrimm (depicted above) are many times larger, their heads are rounder, they have three-clawed hands, and two forearms protruding from each elbow. Also this type of Ru'tai posses individuality, which is apparently granted through magic. All Ru'tai have multiple red eyes, although the "mongrels" have fewer and smaller ones. They are intelligent creatures, with vast technological as well as magical knowledge. 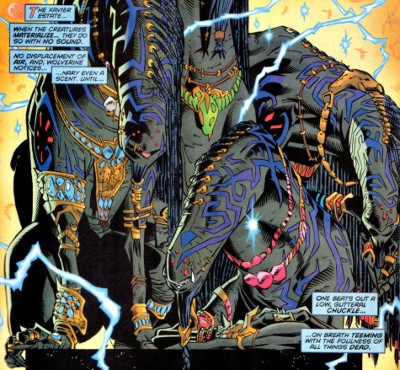 The Ru'tai were a slave caste to the N'Garai for many years, who actually helped them build their empire. While the N'Garai are physically stronger, the Ru'tai are more intelligent, less prone to savagery and have a deeper knowledge of magic and instinctive connection to the universe. For years they defined their power through secrete practice and secret prayer, but it wasn't until the Mai'keth, the undying one, inspired them to revolt enabling them to finally overthrow their masters.

Now lords of their dimension the Ru'tai decided to conduct investigations on Earth. The Ru'tai Pilgrimm was chosen as the main explorer, and to help him in his cause he was granted individuality and the use of the eye of Kierrok, which after killing him, the Ru'tai had placed into a necklace. Using the multitude of N'Garai cairns around the world, the Ru'tai abducted humans so that Pilgrimm could perform his experiments on them. Due to one of those cairns being on the Xavier Estate, a few townsfolk from Salem Center went missing as well, prompting the police to investigate. After Wolverine was abducted and experimented on, the X-Men began to suspect that "Eany" and "Meany", the slugs that were a part of their new teammate Maggott, were responsible, as they were nowhere to be found. After waking up from an eight hour coma, Wolverine came around and cleared up the misunderstanding. Following his lead, the X-Men investigated the cairns, ending up in the N'Garai dimension with some of them captured by the Ru'tai.

Pilgrimm tried to dissect new member Cecelia Reyes, but couldn't get past her force field. Caught in a panic attack she shouted: "I deny you, N'Garai!" Pilgrimm immediately stopped the probing and slapped Cecelia around asking her how she dare call him N'Garai and explained to her how the Ru'tai had overthrown the N'Garai thanks to the inspiration of Mai'keth. During his narration, Cecelia noticed Maggott's slugs on Pilgrimm's shoulders, which bore a striking resemblance to him. When the other X-Men came to help her, they were easily defeated by the eye of Kierrok, but when Pilgrim became aware of Wolverine he suddenly knelt down and called him Mai'keth.

He released the captive X-Men as a gift, but Logan ordered him to let the humans go as well. Pilgrimm was surprised thinking Wolverine was testing him. He explained that he knows where his energy came from and told him that they were one. That said, a crystal statue of Logan appeared and Pilgrimm told them how Mai'keth came to the N'Garai dimension and killed many demons without dying himself. Logan realized that it was true: the last time he was in the N'Garai dimension he was more feral than man and killed a lot of the demons as a result, thus inspiring the Ru'tai's legend of the undying warrior as apparently time moved a lot faster there.

The X-Men attacked Pilgrimm once more, and after they effectively destroyed his power source, the Eye of Kierrok, the cynosure they were in began to collapse and forced the X-Men to exit through the nearest cairn. They and the human captives narrowly escaped, while all over the world the N'Garai cairns exploded. Unbeknownst to them, Pilgrimm disguised himself as a human and escaped as well, blending into humanity with all the refugees from his experiments. Meanwhile Black Air had captured a lone Mongrel in Salem and blamed the murders on him; after the cairns disappeared the mongrel stopped moving. [X-Men (2nd series) #74-75] 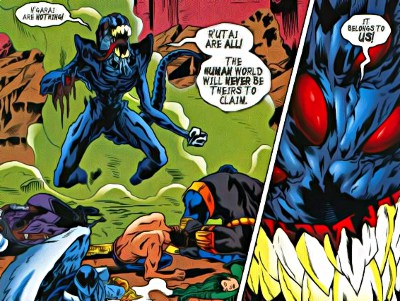 Weeks later, Pilgrimm discovered that the N'Garai had allied themselves with Belasco and were attempting to conquer Limbo, which would allow them access to any place and time. Disguised as Colonel Wei in Hong Kong, he discovered one of the N'Garai cairns. Back in the U.S. the Mongrel that had been captured in Salem awoke as an N'Garai cairn appeared. He leaped into it and out came Colonel Wei, who in turn transformed into Pilgrimm. He faced off against the N'Garai who were attempting to steal some of the X-Men's souls for Belasco's spell, but the heroes had problems believing that he was actually on their side and opposed him at every turn. In battle Pilgrimm broke some bones but quickly regenerated, claiming to have a healing factor. He then transported himself to Limbo, where the final showdown between the X-Men and the N'Garai was taking place. As he was about to attack Jean Grey Pilgrimm sensed a kindred spirit in her and thought it would be an honor to consume her. The Phoenix and the Ru'tai, he claimed, have the same soul. Jean was greatly disturbed but managed to convince Pilgrimm to stop Belasco instead of attacking the X-Men. He defeated the possessed X-Men and then simply disappeared, although Jean noticed that he still hadn't given up his interest in her. With the N'Garai's plans thwarted, the Ru'tai are still in charge of their dimension. [X-Men: Black Sun #1-5] 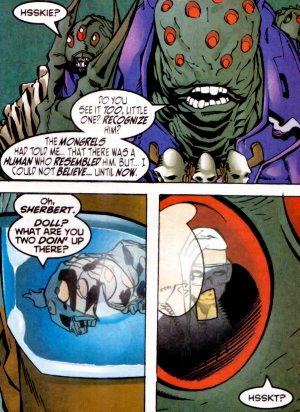 It is important to notice that there appears to be a connection between Pilgrimm and Maggott's slugs, though, if there was any, has never been explained. Although Maggott was killed in the Neverland concentration camp, one of his slugs was shown to have survived albiet in a holding tank in Mr Sinister's labratory at the camp. [Weapon X (2nd series) #5, #13]

The N'Garai probably have more magical power than the Ru'tai, but the Ru'tai are better at using it. Proof of that is the fact that Pilgrimm managed to open several cairns with the Eye of Kierrok, while Kierrok himself needed the cairn to be broken so that the portal would open. Another explanation could be that the spell which sealed the cairns was specifically keyed to the N'Garai and not the Ru'tai.