SPELLS AND SORCERY (a guide to Marvel magics)

Introduction
Magic in the Marvel Universe is difficult to qualify. In reality, magic is the term used to classify the uses of potions, spells, incantations, and other talismans or conduits used to summon a power that defies the laws of physics. In the Marvel Universe, however, "the laws of physics" are already just a suggestion, so a better classification must be made. It's hard to truly determine what separates a mutant energy force bolt from a technological repulsor bolt from an eldritch energy bolt. Most magical effects can be easily duplicated by some form of technology or benevolent mutation -- it only qualifies as "magic" if the power is summoned in a certain way or from a certain source. There seem to be three basic forms of magic to be tapped in the Marvel Universe, at least for humans: personal, environmental, and extra-dimensional.

Dimensionality & Separation of Skills
Personal power comes from within the magic wielder, tapping the latent strength of the mind and spirit through meditation, mental focus, spiritual purity, or some other similar method of achieving clarity. Sorcerers can manifest such powers as mind reading, thought projection, psychic bolts that stun or incapacitate, astral projection, illusion casting, hypnosis, psychokinetic levitation and manipulation of outside objects. 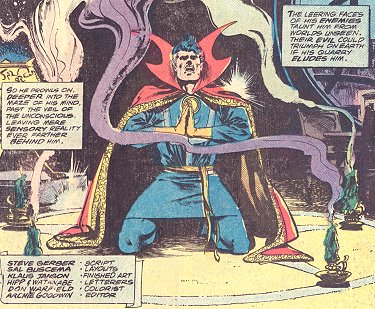 Doctors Strange and Druid have both unlocked their full range of psychic potential through training and meditation. The difference between mystic psionics and genetically-gifted psionics is rather murky. The best way to look at it is to see one person born with a talent (mutants) and another person who cultivated the talent through long, arduous hours of practice (mystics). Magical powers are also called upon, not omni-present -- a magician will never have the problem with shutting out other people's thoughts, as is often the case with mutant telepaths. On the other hand, mutant powers come with an "X-tra" level of strength to call upon, a portion of their mind/genes solely devoted to maintaining their power. Mystics, however, must tap into their regular sources of "power" to activate their psychic talents, thereby putting a drain on their physical resources and living energy if they use their psychic abilities too much or too often. Mystics can circumvent this problem by paying tribute to higher mystical beings, though.

The second form of magic is environmental, a collection of forces drawn from the surroundings. This area of skills includes force blasts, protective force fields and shields, teleportation across time, space, and dimensions, healing living beings of physical or supernatural damage, manipulation of the four elements, and sometimes more selective feats such as transmogrification. It is difficult to tell whether the energies used in this method of magic are truly a unique form of "magical energy", or if magic is simply the method used to command the inherent energy of the environment. Many times, when an individual studies magic, they develop an inclination or an aptitude towards a certain area of magic. Amanda Sefton, for instance, finely honed her teleportation power over any other ability. Though not technically a "personal power", these skills are still draining on the wielder's own living energy, presumably because their personal energy must still be called upon to tap into the outside forces they manipulate for these feats. Also like personal power applications, however, higher mystical beings may be called upon to give their power in place of the sorcerer's own. 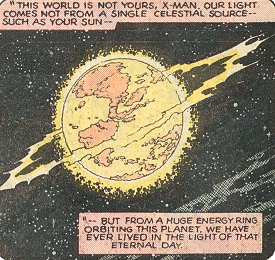 There exists within the Marvel Universe a multi-dimensional space which creates the concept of parallel worlds and extra dimensions. Those worlds "closest" to our own are the What If..? realities--worlds that are identical to our own in every possible way except for a small variation in the timestream, some event that caused other events to take a different course. Beyond these Alt-Earths are other dimensions that still operate under three dimensional space, but have different physical laws that they abide by. Consider Arkon's world Polemachus, which doesn't orbit a sun but instead is lit and heated by a ring of energy. Further "away" from our Earth are dimensions governed by a greater number of spatial dimensions than our own. Though human(oid)s may still develop in some of these realms, the basic laws of the universe are entirely different, and in some cases proper human interpretation of them is impossible. It is from these dimensions that we find the genesis of most magical forces and mystical beings involved in the third form of magic.

The third form of magic wielding is the most difficult, the most dangerous, but also possibly the most rewarding. By evoking the name or personal power object of higher being, a magic wielder can summon tremendous power to augment or surplant their own. For instance, Doctor Strange is capable of creating protective force fields on his own, but by summoning the Shields of Seraphim he can borrow power from the Seraphim to shield himself while not putting any drain on his own personal resources. 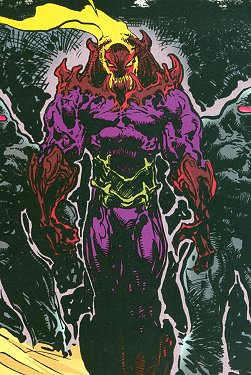 Evoking "power names" can also be used to add general potency to a spell. A locator spell can find what you're looking for that much faster if it is done "In the name of the Vishanti". Power is not without its price, though. Mystical entities can be purely good, purely evil, or purely something else. To continue the Doctor Strange example, his classic patrons in the field of magic were the Vishanti, a triumvirate of mystical beings mostly dedicated to knowledge, and so he routinely evoked their name to no ill effect. 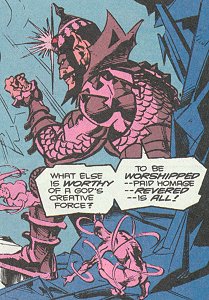 Summoning the power of his enemies Satannish or Dormammu, however, could have a dangerous or corruptive outcome, and so was only used in desperate times requiring enormous raw power. Other beings, such as the Seraphim or Cyttorak (of Juggernaut fame), could not truly qualify as good or evil -- their single-minded devotions to a specific concept or area of magic mean that as long as Strange used their magics as they would wish, there was no problem.

Variation in Sources
Even in the world of magic, though, nothing comes without a price. By using the power of the mystical entities, Strange was promising them his service in return if ever they desired it. This posed a problem when the realms of magic fell into a state of conflict, and all the various entities Strange had borrowed from in the past came to “call in their markers“. The Vishanti, Ikonn, Cyttorak, Watoomb, the Seraphim, the Faltine, Munipoor, Satannish, Raggadorr, Denak, Valtoor, and many others all demanded the doctor’s servitude, and only by reciting the Emancipation Incantation and sacrificing the majority of his powers was Strange able to deny their claims on him.

In other instances, mystics are able to draw power from non-sentient sources of magical energy, such as the Winding Way or Mojoverse’s Wildways. Simply reading spells aloud from a mystical tome is also enough to summon magical forces, though someone possessing their own knowledge and power would be far more capable of controlling the power they evoke. 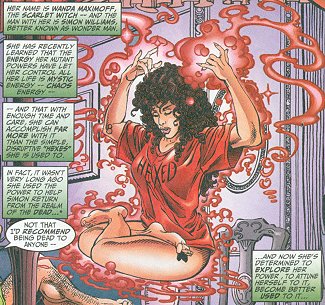 And yet, with her recent foraging into true magical knowledge, Wanda has been able to use her powers for non-chaotic effects, such as limited self-levitation or locator spells. Various types of non-sentient magic power exist that are conditioned to be used for a certain range of effects, but can also be tapped for general magic feats, such as those of personal power or an environmental nature. As an example, Doctor Strange was forced to seek a new source of magic after rejecting the Vishanti and his other patrons. For a time he tapped the Gaian Aura, and later became a wielder of Catastrophe Magick. In each case, he was able to utilize these sources for the first two forms of magic (mind reading, levitation, force blasts, etc), but each also came with its own unique talent - the Gaian Aura made Strange far more adept at manipulating the elements, while Catastrophe Magick gave him the inherent ability to “change things“ through transmogrification.

Another way to classify magic is into black magic and white magic - “evil“ and “good“. White magic includes the full range of defensive, healing, and otherwise non-aggressive magic. There are still “white magic force blasts“ and some other offensive effects, but non that are inherently or immediately lethal. White magic is achieved through purity of mind and spirit, or a strong focus of will power or drive. Black magic can be faster and more powerful, but is also far more dangerous. Black magic feats are achieved through ritualistic sacrifices or offerings, making pacts with devils or demons, or wielding cursed tomes or artifacts.

The use of this “evil“ magic is corrupting to the soul - the more you use it, the more you want to use it, and the less scruples you will have in its use. Even those who use black magic for heroic or self-sacrificing ends will still succumb to it over time. The simplest of spells invoked through black magic can be corrupted horribly. Consequently, “good“ magic wielders rarely employ black magic unless absolutely necessary. 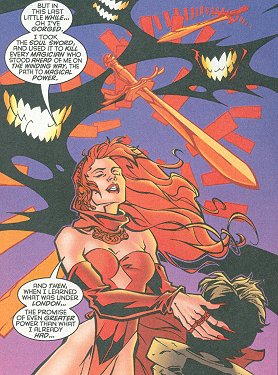 Magical aptitude can be achieved in a variety of ways. The most common way is to come under the tutelage of someone already well versed in the mystic arts. Some objects of power are actually so potent that merely possessing them can give a novice considerable power, but an untrained user can very easily be corrupted by so much power without control. Other, highly specific forms of skill development exist, such as following the Winding Way. Designed as a path to mystical power and enlightenment, the Winding Way carries the participant through a spiraling journey in which their power waxes and wanes over intermittent periods of time, enabling the magic wielder to learn humility to go along with their developing powers. Unfortunately, Margali Szardos managed to use the Soulsword to kill and replace all magicians ahead of her on the Way, amplifying her power tremendously. It isn’t clear if this would have been possible without the involvement of the Soulsword, an external source of magic influencing the path of the Way, though.

Born to Wield
There are a number of races - in our reality and in others - who can be born with magic powers, or at least a strong potential to develop them. Talisman’s inherent gift for magic is so strong and innate that it’s practically a mutation in and of itself. 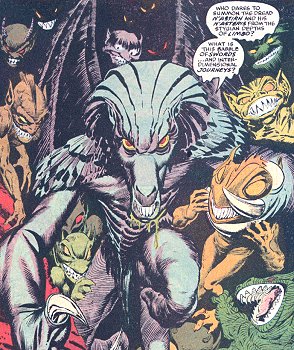 Though virtually anyone is capable of wielding magic in some degree, humans can be born with a strong potential for magic on their own, or inherit it from a parent. Almost every child born in Agatha Harkness’ home of New Salem would be magically apt. Its possible magical energy could be compared to radiation, in that if the parents expose themselves to mystical forces, then their child will be born more in tune with magic than they normally would be. Besides humans, there are also a wide variety of races and creatures referred to as demons that tend to populate mystical dimensions and planes. There is no catch-all description for demons, unfortunately they appear in any number of shapes, sizes, colors, and intelligences. Many demons possess magical abilities, most likely because they are reared in environments where magic is an everyday occurrence.

The second page gives a short overview of the most important X-related magic using characters of the Marvel Universe.