Marvel has announced yet another entry in its Secret Wars: Warzones series, this one featuring two fan-favorite characters who may also just be two of the most powerful mutants in the Marvel Universe. 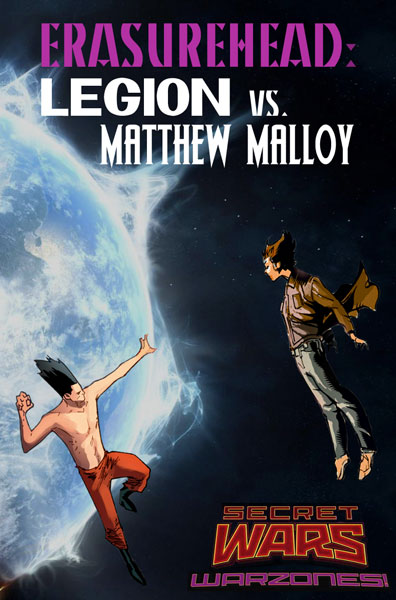 "Erasurehead: Legion vs. Matthew Malloy" pits Legion, the nigh-omnipotent son of Charles Xavier, against an early protégé of Xavier’s, Matthew Malloy. This three-part miniseries will be written and illustrated by Si Spurrier.

Individually, each of these characters has the power to obliterate the fragile remnants of the Marvel Universe. However, there’s a twist: since both of these characters met their ends by having their births prevented, neither of them technically exists anymore, making the content of their climactic confrontation in this series a bit more… abstract than other Warzones titles. Specifically, their miniseries will not be scripted or illustrated at all, since it technically never happens; each issue will contain just a cover and 22 blank pages, accompanied by Marvel’s usual ads.

But don’t let that deter you from buying it, its creators say. “I find that fans sometimes have this idea that the value of a comic can only be weighed by the strength of its story or the quality of its artwork,” Spurrier said. “While I can see where they’re coming from, I disagree with that view. There’s so much more to a comic than if its characters grow in some way, or if it tells an interesting story, or provides a pleasing artistic experience, or even if there’s any art or story at all. In fact, I sometimes find that the best stories never even make it to the page, and merely exist as fleeting thoughts in my mind as I wake up in the morning that I don’t care to share with anyone else.”

When fans last saw both Legion and Malloy, they were both being erased from existence in Hail Mary resolutions to out-of-control plotlines. We asked if this series will explain how they returned, and if the mystery of Battleworld has something to do with their abrupt resurrections.

“Well Battleworld certainly has something to do with it,” Spurrier said. “As for what that is, exactly, you’ll have to wait and see. Note, though, that you may have to wait for forever, since I don’t actually reveal how they return in the book, due to the little fact that I didn’t actually write anything for it, but I’m sure if you use your imagination you can come up with something as you flip through the story’s 66 blank pages.”

Despite the fact that this three-part series will never actually be written or illustrated, Spurrier still fervently defends Marvel’s decision to publish it.

Look for "Secret Wars: Erasurehead" to hit shelves in June. Click here for a sneak preview!