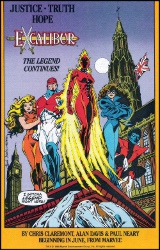 On the letters page in Uncanny X-Men #208 in 1986 it was announced: "Rachel (Summers)' going to need all the friendship and support and affection she can get, not simply in the X-Men but also in the upcoming Phoenix Limited Series we have planned for later this year, which Chris Claremont will be writing and Rick Leonardi pencilling. We think it'll be something as different and special as the lady herself."

However, the Phoenix mini-series never appeared, although it remained in the works until Chris Claremont left Marvel in 1991. "In (Uncanny) X-Men #209 (1986), she was spirited away by Spiral to Mojo's world and something awful happened, which is going to be explained in a Special Format mini-series," artist Alan Davis told Amazing Heroes #193. "I don't know if Chris has finished writing it yet."

"(The Mutant Massacre crossover) was supposed to lead into a mini-series which would tell the story of what happened between Rachel's disappearance from the X-Men in issue #209 and her reappearance in the Excalibur special edition (in 1988)," Claremont told Comics Focus #1. "This was supposed to tie into Longshot's presence in the X-Men and his departure from that book to star in his own ongoing series. Except, for various reasons, the mini-series never got finished and the Longshot series never got launched, so suddenly you're left with dangles that weren't intentional but are there nonetheless."

"Plots come and go for all sorts of reasons. Threads dangle for all sorts of reasons. The writer assumes that there will always be time to tie them up in neat little knots things that are meant to come to fruition fifty issues down the line will happen. I always assumed I'd be around to do it: Unfortunately, I wasn't."
In the Excalibur Special Edition, Phoenix returned from Mojo's world without the capacity to tell her true memories from the false memories she had gotten in his world of entertainment. It wasn't a big mystery what had happened to her, though, as it was mentioned - and repeated in Excalibur #1 and X-Men Annual #12 in 1988 - that Mojo had made her a star in his world, and that she had escaped from being kept as his slave.

"It's no secret that I've been wanting to work with Alan Davis for some considerable time," Claremont told Amazing Heroes #134. "Basically, in the past what I wanted him for is to draw the X-Men."
"I like working with Chris (Claremont) very much," Alan Davis stated in Amazing Heroes #193. "But the difficulty is, if you go on to a book like X-Men, you're just another new artist on the X-Men, and unless you somehow make a tremendous splash you're selling yourself into a slavery of working on something where you can't really do too much because the formula is tested and so successful."

"The first I knew of Excalibur was when Chris phoned and instead of asking, did I want to draw the X-Men, said Marvel is doing another X-book and it's going to be set in England and Captain Britain is in it," Davis recalled in Modern Masters Volume One. "Now Chris was one of the creators of Captain Britain so he obviously had an interest in him. So I don't know whether Captain Britain was included in the group to encourage me."

"Usually, when you move on to an existing book, you're following a regime, and by starting on Excalibur with issue #1, I was able to put a lot of myself into it," Davis explained in Comics Scene #30. "I liked the characters, and it was nice to be in on something since its inception."

"I began figuring what could I do with the X-Men who weren't going to be in the (1988) Fall Of The Mutants (crossover), like Kitty (Pryde) and Nightcrawler," Claremont told Amazing Heroes #134, "because I knew if I didn't do anything with them, other people would leap forward like rabid wolves to heist them. Alan (Davis) and I had been talking over the idea of doing something together a graphic novel, a series, or some such. And then basically the concept of Excalibur evolved, and we decided on a team, which would be Shadowcat (Kitty Pryde), Nightcrawler, Captain Britain, his girlfriend Meggan, Phoenix, and someone new whom we'd invent (Widget)."

"Originally, Colossus was also intended to be a member of Excalibur. However, Colossus ended up rejoining the X-Men for the basic reason that the X-Men didn't have a big, muscular strongman, and as the Excalibur concept grew along, and Captain Britain came into it, we already had a strongman in Excalibur we didn't need two. And the X-Men needed one, so we tossed Colossus back."

"When we originally started, (editor) Ann Nocenti christened Excalibur "a cosmic comedy,"" Alan Davis told Comics Scene #30. "That was something that really surprised me, because what I had originally agreed to do was basically the X-Men in Europe, and suddenly it was a cosmic comedy. I was told it was because my artwork was so comedic, and while it wasn't my decision, there was a definite intention to put more humor into Excalibur. There's always a punchline on the cover, or a humorous incident."

Alan Davis decided to leave Excalibur with issue #17 in 1989, "Mainly because we were working right up against the deadline all the time and there was no way of getting out of that situation. That was affecting the quality and the look of the book," Davis explained in Amazing Heroes #193. "I had a great time working with Chris (Claremont) and working on Excalibur was heaven-sent, making it a really difficult decision to give it up. (...) I agreed to do the two fill-ins on Excalibur (#23-24 in 1990)."

Ten issues later, Chris Claremont also gave up Excalibur. "Part of the reason I dropped Excalibur was that X-Men (vol.2) was on the horizon and we wanted to start the new book in somewhat less than the extreme deadline situation we always seemed to find ourselves in on Uncanny X-Men," Claremont explained in Comics Interview #98. "Also, at the time, I felt Excalibur wasn't any fun anymore. It had gotten to the point where there was no postive synergistic mix between myself and the people I was working with as pencillers. Rather than perpetuating a book that wasn't zinging, it was easier to just remove myself from the situation and focus my energies on X-Men."

With Claremont's departure, the story announced for 1991 in Marvel Age Preview #1 ended up not happening: "Excalibur goes bi-weekly for the summer, and Nightcrawler forms the Captains Courageous, gathering the Captain Britains from across the multiverse."

Claremont's final Excalibur story was "Girls' School from Hell" in Excalibur #32-34 from 1990-1991 a story that was originally scheduled for Excalibur #7 in 1989 according to Marvel Age #72, and which was to preceed the Excalibur: Mojo Mayhem special edition: "Even in England, Kitty's education can't be neglected, so the Excalibur team sends her off to a private girls' school. But Kitty's in for a shock when the school turns out not to be what she expected! Written by Chris Claremont and illustrated by Alan Davis."

""The Girls' School from Hell" would have worked really well with Alan (Davis)," Claremont told Comics Interview #98. "I thought, when we set out to do it, that it would work as well with Ron Wagner, based on the work I saw on Nth Man it just didn't work. What I was looking for, what (editor) Terry Kavanagh and I were hoping for, didn't gel. It's no fault of Ron's, it's no fault of ours; it's just one of those things."

The two Excalibur Special Editions promised in Excalibur #22 in 1990 became the 1999 X-Men: True Friends mini-series instead.

Of Claremont's abandoned Excalibur plots, one remained unresolved. In Excalibur #21 in 1990, Jamie Braddock turned the head of London's criminal underworld, Vixen, into a fox and she was last seen as such in Excalibur #27 in 1990. Presumably, she is still a fox.

In Excalibur #32 in 1990, Sat-yr-9's henchman Nigel Frobisher had become the new Vixen, but whatever plans he had remained unfulfilled, because the subsequent writer, Alan Davis, killed him off in Excalibur #56 in 1992.

"I phoned Chris Claremont and asked him if he would have any problems with my going back to the book, because almost immediately after he left, they offered it to me," Alan Davis told Comics Scene #30. "I didn't want it to look like there was foul play. That's not what actually happened, and I didn't want it to appear that way."

"When I took over on Excalibur, there was a definite brief that there were too many loose ends hanging and (editor) Terry (Kavanagh) wanted them tied up," Davis admitted in Modern Masters Volume One. "Fortunately I was able to manage to tie the loose ends up so that many people thought that was the way Chris (Claremont) had planned it all along."

There was one plotline that Davis initially left for Claremont himself to resolve. "From issue #5 (1989) of Excalibur we'd been building up a subplot where we had Sat-yr-9, Doc Croc, the Vixen, and Jamie Braddock coming together for a climactic battle, which still hasn't happened, although Chris Claremont is planning on doing that in a special series at some point in the future," Davis revealed in Marvel Age #100.

When Claremont left Marvel before doing the series, Davis used Sat-yr-9, Vixen and Jamie Braddock anyway. In Excalibur #55-56 in 1992, the heroes learned that Sat-yr-9 had killed Captain Britain's old girldfriend, Courtney Ross, and had posed as her since Excalibur #5. However, Davis didn't reveal why Sat-yr-9 had taken a special interest in Kitty Pryde, whom she had befriended in Excalibur #21 in 1990 and had spoiled with an amazing birthday celebration in Excalibur #24 the same year.