A neglected character, Colossus was originally intended to be the star of the X-Men book, and his shot at stardom with his own mini-series ended up not happening, either.

"The initial inception of Colossus (Peter Rasputin) was done as a character for Superboy and the Legion of Super-Heroes, when (artist) Dave Cockrum was doing that book," writer Len Wein recalled in The X-Men Companion. "He never had a chance to use him. We were at a party at Marv Wolfman's house years ago and we were standing out on the balcony talking about characters, and he had wanted to make some changes in the Legion while he was drawing it, and he came up with this idea of doing a Russian character. We talked about possibilities, and he described the power and Colossus was the name I suggested to him at the time. Russian Colossus, and all that. He was going to use it there and never got a chance to, so we decided, "Well, we've created a character, might as well use him elsewhere." So we put him into the X-Men." 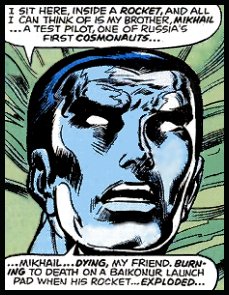 "Some of my plans have been forgotten since it became such a radically different book. But Colossus, for example, was meant to be the star of the book. Thats why he was the big figure in the first half-dozen covers; he was going to be their Thing, their Hulk, their permanent member. That's why his costume is red, yellow, and blue. Primary colors."

"When (subsequent writer) Chris Claremont gave him a cosmonaut brother (in X-Men #99, 1976), I wanted to strangle him. Suddenly Colossus was not ordinary anymore, and what made him work was that he was ordinary, despite his powers. If his brother's a cosmonaut, then the KGB had to be checking out that family, there's no way he could have been living simply in the collective. I had him out in Siberia almost on purpose. No one ever noticed him. The townspeople didn't bother, he was good to them, and they all lived out there. The government didn't even know he existed. But with a cosmonaut brother, they can't possibly not know he existed. Chris really turned everything around by doing that. That's the problem. Writers can have a great idea for a story without thinking of all the ramifications."

"I would have played him up more," Wein told The X-Men Companion. "I think Chris tends to let Colossus stand on the sidelines; he focuses on Wolverine and Storm, the characters he's most interested in, and lets the others flow around. So he hasn't really treated Colossus that much. I'm not sure what I would have done, but I think I would have paid more attention to the character than Chris has been doing."

"Len always felt the strong guy, the strong man, was the best character to be the lead character," Cockrum acknowledged in The X-Men Companion. "He makes a good visual, and we went ahead and made him the prominent figure on the covers a lot, but he's been terribly neglected and I think it's about time we did something with him really."

And Chris Claremont had plans in that regard. "It took a long time for us to find Colossus," Claremont revealed in The Comics Journal #50. "Now that we've found him, we're beginning to get into him a little bit more."

"There's a scene in X-Men #119 (1979) where everybody's happy, it's a Christmas party, they've defeated Moses Magnum, saved Japan, saved the world. Banshee's alright, everyone's happy except Colossus, who's standing out on the porch, looking miserable, and Storm goes out and says, "What's wrong?" And he says, "Well, it's Christmas. And I miss my folks." He's homesick. And this will be built up over the next few issues, culminating in his quitting the X-Men. The character nobody anticipated quitting."

"What will become of Colossus' growing realization that what he is doing as an X-Man may be to the detriment of his homeland, the Soviet Union? He leaves the X-Men. He comes back, but there are times when perhaps the charaterizational imperative is to make a more permanent break."

However, this character development was dropped after X-Men #124 in 1979. Many years later, in 1989, Claremont wrote a story for Classic X-Men #29 where it was revealed that Colossus' homesickness had stopped because he had learned during a visit to the Soviet Union that it was the wish of his fatherland that he remained an X-Man. 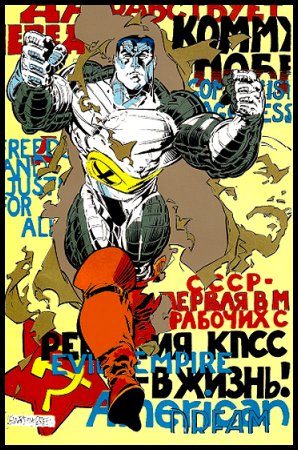 Before the story in Classic X-Men #29 appeared, Marvel Age #39 announced: "The big news this month is the upcoming Colossus Limited Series. Feeling somewhat guilty for not protecting his Soviet homeland, the armored X-Man (accompanied by his younger sister and New Mutant,  Illyana) will travel back to his native land for the first time since he joined the X-Men. This odyssey will give Peter the opportunity to question his role in the world, and to wonder whether he is actually accomplishing anything as a super hero. This six issue series is being written by Chris Claremont and pencilled by Rick Leonardi. Watch for it this summer (1986)!"

The Colossus mini-series never appeared, however. 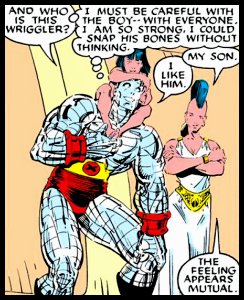 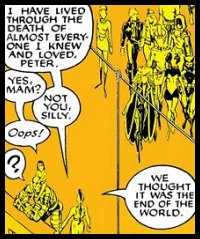 In another issue of Classic X-Men, #21 from 1988, Colossus met and supposedly had his sexual debut with the girl Nereel in the Savage Land. In X-Men Annual #12, 1988, Colossus met her again and now she had a son named Peter like Colossus. Nereel never told Colossus if he was the father, but when she and Peter were last seen together in Uncanny X-Men #250 in 1989, it was revealed that Nereel was in love with Colossus.

In the 2004-2006 X-Men: The End series, which was written by Claremont and set 15 years in the future, Peter, the son of Colossus and Nereel, appeared as Kid Colossus. In the GeNext and GeNext: United mini-series from 2008 and 2009, which are set 10 years further in the future, Pavel Rasputin, the son of Kid Colossus and grand-son of Peter Rasputin and Nereel, appeared.