Kitty Pryde and the substitute X-Men

Caliban and Willie Evans, Jr. never made it into the X-Men, but Ariel/Sprite did and became one of their most popular members. 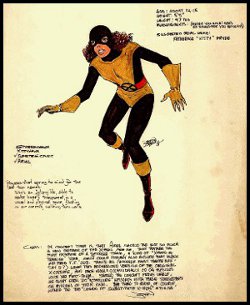 In X-Men #129, 1980, the X-Men found the young mutant Kitty Pryde, who ended up joining the team in X-Men #138 later that year. "Kitty Pryde started with that cover that I did for The Comic Reader (#167 in 1979) with all the new X-Men wearing the old X-Men costumes, and I thought it would be neat to have somebody in the old costume," artist John Byrne recalled in The X-Men Companion. "I always liked the old costume."

"And I remembered somebody at a con or somewhere saying that he thought it would be nice if there was a constant change of cast in the X-Men and that the new kids wore the old costumes until they graduated when they got individualized costumes. So you would have four or five Kittys running around wearing the old costumes, who would be like the second team. And then, when I started to figure what I wanted the first one to be, I instinctively thought of a little girl. She started about 18, and as I drew her she got younger and younger."

A young Sigourney Weaver was how the face started to evolve when I started looking for the face. A couple of them started to look that way and I said, "Okay, that's fine. She can grow up to be Sigourney Weaver. That's a nice image."

"At one point (writer) Chris Claremont said we should call her Thunderbird, and I didn't like that at all but it put the "bird" name into my head and I started writing down bird names, trying to think of a name for her, and one of the ones I wrote for her was Kitty Hawk. And then I remembered a girl I knew in college whose name was Kitty Pryde, and I always felt that was a neat name, so as soon as I wrote "Kitty Hawk" I thought, "No, Kitty Pryde that will be her real name." And then I came up with Sprite, and then we got all these Fresca jokes so we changed it to Ariel and just before going to press I said, "No, Sprite," the original name. Because Ariel doesn't tell you anything about her, but you can pick her out of the group on the basis of the name Sprite. I think I also saw The Tempest on PBS and realized that Ariel was a male."

"What I told Chris she did was that she cancels the valences between atoms so it's not her who becomes intangible, it's what she's walking through," Byrne told The X-Men Companion. "In other words, the wall becomes intangible, not her. She's still solid. You can hit her when she's doing this trick. You can knock her out. You can shoot her, because she's doing it to a specific thing. She's not intangible."

"I think she succeeds, but not as much as I would have liked to. I was very pissed off at Chris when he made her a genius. I did not approve of that at all and it was too late for it to be changed when I found out about it. I felt as if I'd lost the character at that point. She wasn't the girl I thought she was."

"I made her the genius of the team because we didn't have one," Claremont explained in the X-Men Companion. "I felt the team needed somebody with a brain, somebody who could whip up gadgets in an instant, who could explain things, understand things a Beast-character, a Reed Richards, a Tony Stark. Every team needs one. The X-Men didn't have one." 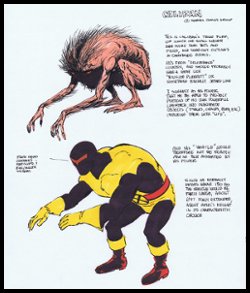 "I was in a comics shop at one point and I said "Ariel" and somebody said "Caliban" and it was like, "Of course, if we're going to have an Ariel, we must have a Caliban," Byrne remembered in The X-Men Companion. "He was going to be an incredibly ugly Living Cerebro kind of character, whom we would never see entirely. We would only see bits and pieces of him. And he would live in this dark room in the back of the mansion because he's so ugly. Because the other X-Men don't like to look at him and he doesn't like to look at himself."

"Kitty would be able to relate to him for some reason," Byrne continued in The X-Men Companion. "Chris defined the situation as being that she can't stand Nightcrawler because he is "wrong" somehow, he is a human done sideways, but Caliban was so hideous and so deformed that he was a broken thing, like a bird with a broken wing, and she could relate to him on that level. And it was going to be a very trying thing for Nightcrawler, the fact that Kitty could relate to Caliban but not to him."

"The X-Men were going to discover the tap that the Hellfire Club had put on Cerebro (as revealed in X-Men #129 in 1980), or at least figure out that there was something amiss, and Caliban was going to fulfil the function of Cerebro for the X-Men."

"(Editor-in-Chief) Jim Shooter killed the concept of a second team of X-Men, the X-Men in training, because he said it sounded too much like the Legion of Substitute X-Men, so it died right there and Kitty became the only one who ever made it into the book," Byrne revealed in The X-Men Companion. "Kitty, Caliban, and Willie Evans, Jr., that little black kid who was in Fantastic Four #203 (1979), who made the monstrous version of the FF, were the only ones we were sure were going to be in it."

A Caliban designed by Dave Cockrum was introduced in Uncanny X-Men #148 in 1981. He never joined the X-Men, deciding to live with the Morlocks in the sewers underneath New York, though many years later he did join X-Force using his powers to help track other mutants.

The 9-year-old mutant Willie Evans, Jr., reappeared some years later in Iron Man Annual #8, 1986, in which he died.