Artist Dave Cockrum created Nightcrawler, one of the most popular X-Men characters.  "In 1974, writer Len Wein and I were invited to revive X-Men," Cockrum recalled in Wizard #33. "For months, I'd been badgering Roy Thomas, then Marvel's Editor-in-Chief, for my own series, and he finally came through for me. One day, he walked into the area that I worked in, and he literally told me to go home and come back with some X-Men. I was really excited about this."

The first new X-Man that Cockrum introduced was Nightcrawler, a personal favorite that he had created years earlier. "I was still in the Navy when Nightcrawler popped into my head," Cockrum recalled. "I was stationed on Guam at the time, and I sat up one night in the middle of this crazy typhoon because it was just too noisy to sleep. I don't know how my mind went down this path, but suddenly I found myself thinking about this Nightcrawler character, this demon from Hell who had flubbed a mission and, fearing what would happen to him if he went back what kind of punishment he'd have to face had decided to stay above ground, so to speak, in the world of humans." 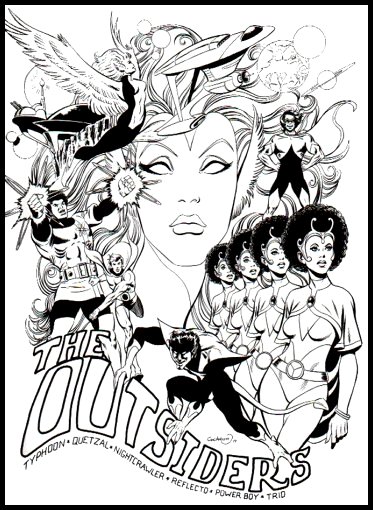 Cockrum's first wife Andrea was with him that fateful night in Guam. "We decided wouldn't it be fun if he was a demon and he could teleport and run up walls and he howled like an animal and all kinds of weird stuff," Cockrum recalled in The X-Men Companion. "He was a nasty son of a bitch. The only thing that made him any kind of a good guy at all was just that he chose to help the good guys."

"When I became a pro and I was doing Superboy and the Legion of Super-Heroes (at DC Comics) I proposed four new Legionnaires and Nightcrawler was one of them. But (editor) Murray Boltinoff's response was that he was too weird looking."

DC's loss was Marvel Comics' gain. Instead of a demon escapee from Hell, Nightcrawler became a mutant from Germany where he had been a carnival freak at Der Jahrmarkt before joining the X-Men. His real name was Kurt Wagner.

Cockrum also created the African Storm, the Russian Colossus and the Native American Thunderbird for the revamped X-Men team, but Nightcrawler remained closest to his heart during his run as X-Men artist. In The X-Men Companion, subsequent artist John Byrne remembered: "I came to the X-Men being very down on Nightcrawler because I felt that Cockrum had given him far too much of the spotlight. I felt in those early days it was Nightcrawler Comics co-starring the X-Men." 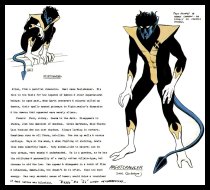 Click on the images to the right for a closer look at Dave Cockrum's initial designs and notes for NIGHTCRAWLER!

When Chris Claremont took over as the writer of X-Men with issue #94 in 1975, it became up to him to define Nightcrawler's character and establish his past history. "When we first started using him, I think we intended to go with that dark, malevolent side," Cockrum recalled in The X-Men Companion. "Personally, I now prefer him the way he is, the swashbuckler. Every goddamn Marvel weird-looking person (is brooding), so why not have one who doesn't?"

"I think it was just because he was my favorite character, and he started reflecting my attitudes and I'm a frustrated swashbuckler and I'm a movie buff. So, it just came about naturally."

Initially, Chris Claremont had Nightcrawler use an image-inducer to hide his true appearance from the public, so they wouldn't chase him down like an angry mob as had happened in his first appearance in Giant-Size X-Men #1 in 1975.

"I would never have given him the image-inducer," Len Wein told The X-Men Companion. "I think it was one of my original orders as an editor to get rid of the thing, because so what? You've got a character whom, if he could look like anybody else, denied what he was all about. He should have to wear the trenchcoat and slouch hat and his hands in his pockets and his tail tucked into his pants so people wouldn't climb the walls as he walked past them."

Early in his run as X-Men writer, Chris Claremont got the idea that the ruler of the dimension of dreams, Nightmare, who had pointy ears just like Nightcrawler's, should be revealed as Nightcrawler's father. Unfortunately, Nightmare was an ancient foe of Doctor Strange and Roger Stern, who was writing Doctor Strange at the time, did not like the idea.

"Chris had come up with the latest of several crazy ideas and declared that Nightcrawler's father was Nightmare," Stern recalled in Back Issue #29. "And I replied with something like, "No, he's not. I'm not going to let you appropriate one of my character's major villains." As I recall, Len Wein crossed the room and shook my hand. And not too long after that, I did become the X-Men editor and was able to make sure that didn't happen for long enough that Chris eventually changed his mind."

Many years later, in Uncanny X-Men #428-434, 2003-2004, writer Chuck Austen revealed Nightcrawler's father to be Azazel, a mutant from biblical times also known as Satan. He was trapped in the dimension through which Nightcrawler teleports and had sired mutant offspring capable of opening gateways to Earth. The mutants Kiwi Black and Nils Steiger (Abyss) were Nightcrawler's half-brothers. Azazel had entrusted the gypsy witch Margali Szardos to raise Nightcrawler. In X-Men Annual #4, 1980, she had told Nightcrawler that she had found him next to his dying mother when he was barely an hour old.

In Uncanny X-Men #142, 1981, Nightcrawler met the shape-shifting mutant Mystique, who had a physical resemblance to him. She told him that his adoptive mother Margali Szardos could answer his question about who she was. But Nightcrawler never asked Margali. 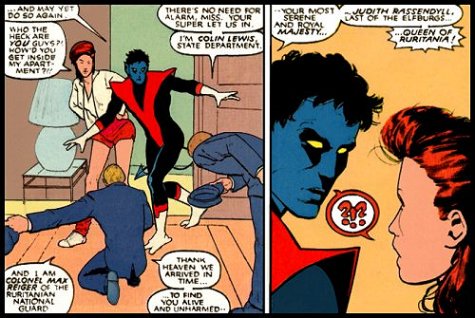 In Uncanny X-Men #204, 1986, Nightcrawler rescued a new character, Judith Rassendyll, from the hitman Arcade. Afterwards, Judith learned that she was the last of the Elfburgs and heir to the throne of the European country Ruritania.

Uncanny X-Men #204 had been advertised in Marvel Age #36: "It's the start of an epic adventure that will take Nightcrawler from the wilds of Central Park to the back woods of Europe."

"Nightcrawler deals with his fears about the Beyonder, a love-life that's falling apart, and the truth about himself and his origin."

"We started to do his origin and the story died on us," Claremont told Comics Focus #1. "We set up, we started it rolling, tried to hammer it into something of value, and it died. This happens. Once in a while you'll run into a story that's a major dud, it just will not fly, no matter how much air you pipe into the wings. So, we rewrote the ending of the story and instead did one with Rachel Summers, Wolverine and the Hellfire Club, which led up to the "Mutant Massacre", which turned out to be a much more powerful and effective storyline." 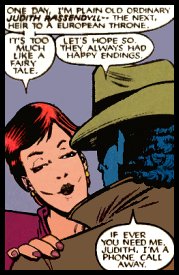 Nightcrawler's origin story was cut short in Uncanny X-Men #206, 1986, with Nightcrawler not accompanying Judith Rassendyll to Ruritania. It was never revealed who had hired Arcade to kill Judith, but it was probably someone who didn't want her to ascend to the throne of Ruritania. 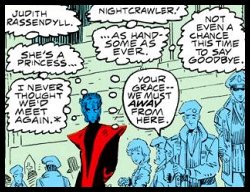 Judith reappeared in the Excalibur: Mojo Mayhem special edition in 1989 where she was now Princess of Ruritania and about to enter into an arranged marriage. Despite romantic attraction between Nightcrawler and Judith, she has never appeared again.

When Nightcrawler joined Excalibur in 1988, Claremont announced in Amazing Heroes #134: "One of the storylines we will seriously try to play with is Nightcrawler's origin. We would've done that in X-Men, but the story was such a dud, I decided not to do it. Hopefully now we'll try again and do it right. Everyone has been wondering why Nightcrawler and Mystique look alike."

However, his origin didn't happen in the pages of Excalibur either, but a 64 pages Excalibur hardcover graphic novel was announced in Marvel Age Preview #1 to ship in December 1990: "Chris Claremont and Alan Davis continue their Excalibur collaboration with the biography of Kurt Wagner Nightcrawler, from his birth to his rescue at the hands of Charles Xavier. We will finally learn more of the mysterious connection between Nightcrawler and Mystique!"

However, the graphic novel never appeared either, and Nightcrawler's origin ended up being written by Scott Lobdell in X-Men Unlimited #4, 1994, instead. Lobdell did not follow Claremont's ideas, but he knew about them. He explained his reason for going in another direction to Seriejournalen.dk: "It was always Chris' plan that Mystique and Irene Adler (Destiny) were lovers, and that Mystique at one point had transformed into a man and impregnated Destiny and she gave birth to Nightcrawler. So Mystique and Destiny were actually Nightcrawler's father and mother."

"The likelyhood of either A, Mystique growing genitals with sperm that had a DNA-code, or B, Mystique being a guy who was perpetually in the body of a woman, I thought was pretty slim."

Instead, Lobdell had Mystique be Nightcrawler's mother with Destiny playing no part in the equation.

Claremont told about his choice for Nightcrawler's parents in his online Cordially Chris forum: "As for when Mystique and Irene got together, look at the back-story established in X-Treme X-Men # 1 and 2 (2001); check out the fashions and the social culture in the visuals."

"Regarding Mystique, I always considered her default form to be blue-skinned and female. However, being a full-spectrum metamorph, gender for her is a matter of choice, convenience and necessity. Her assumption of the male gender during this particular period of her life relates more to the prejudices of the time. A male consulting detective is likely to be taken a tad more seriously in official circles than a woman."

Claremont also told why Mystique had left the infant Nightcrawler: "Mystique abandoned him because she was totally freaked by this indigo-furred creature with "deformed" appendages and a forked tail! At that point, Mystique had no idea (s)he was a mutant, or a metamorph; (s)he simply reacted as many normal folks would in similar circumstances. And in the process had something of a nervous breakdown, mental collapse. Which of course was a whole other story that will never see print. (I do seem to have a lot of them.)"

Roger Stern commented on the matter in Back Issue #29: "Too many people in the Marvel Universe are secretly related to one another, and it's much more interesting when mutants have normal parents."