The creation of the Mutants, and the true origin of Onslaught. 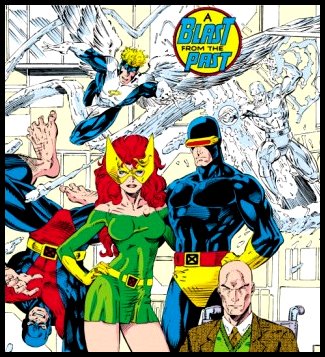 Marvel Comics Group's X-Men series started publication in 1963. It was created by writer Stan Lee and artist Jack Kirby. What separated it from other superhero comics at the time was that the X-Men were mutants, Homo Superior. They were born with an extraordinary gene that manifested during puberty, resulting in super powers.

In the Marvel Universe, mutants weren't deviations from humanity, but instead the next step in humanity's evolution. That's why mutants were hated by humanity, which feared that mutants would take over the world, which just happened to be what the X-Men's archenemy Magneto wanted to do.

The X-Men's mission was to find mutants and teach them how to deal with their super abilities, as well as to protect both mutants and humanity from the exploitation of evil mutants. The X-Men's teacher was Professor Charles Xavier, and the X-Men consisted of Cyclops (Scott Summers), Marvel Girl (Jean Grey), Beast (Henry McCoy), Angel (Warren Worthington) and Iceman (Bobby Drake).

"I wanted to do a new team of heroes and I said to myself, "I've run out of radioactivity and gamma rays and cosmic rays what excuse can I find for these guys getting super powers?"" Stan Lee recalled in Comics Creators On X-Men. "I took the cowardly way out and said, "Wait a minute, what if they were just mutants? What if they were just born that way? Everybody knows there are mutations in real life. There are frogs that are born with five legs and so forth. I can get these guys to have any power I want. I'll just say, "Well, they're mutants. They were born that way." Nobody can argue with that!"

"As with all superhero teams, I had to have an excuse for putting them together," Lee recalled in Wizard: X-Men Turn Thirty. "The Fantastic Four were essentially a family, the Avengers were a club. What could the X-Men be that would be different? (...) I figured if they're teenagers, what's more natural than a school?"

"Now I had to decide what kind of powers the X-Men should have; what kind of people they should be," Stan Lee told Wizard: X-Men Turn Thirty. "At the time, there was no character around (at Marvel) with wings, so I figured I'd design a guy who flies - the Angel. He was rich and conceited. Then I wanted a character sort of like the (Human) Torch. What's the opposite of fire? Ice. Water might have been the opposite, but I couldn't think of anything to do visually with water."

"The Beast I loved he looked like the crudest one, but he was the most well-educated and cultured. I enjoyed that contrast. I hated the name Marvel Girl, but I couldn't think of anything better. Cyclops was another favorite, because I love tortured heroes and he was tortured because he couldn't control his power. He was the serious, brooding one." 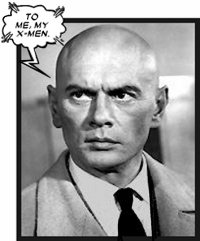 "I thought of Professor X as (actor) Yul Brynner. (...) I thought it would be good if he was physically limited, since his mind was so powerful. Even though he was confined to the wheelchair, in a way he was the most powerful."

"I thought Professor X would want to get them all together without anyone suspecting what he's doing as he trains them, so what would be better than what seems to be a private school? I figured anybody would drive by, see the sign and figure it's a normal school. Little would they dream that there's a Danger Room inside."

"By the way, the Danger Room was Jack Kirby's idea. I thought it was great because we could always open with an action sequence if we needed to."

"I originally wanted to call the book The Mutants, but Martin Goodman, who was my publisher at the time, didn't like that name," Stan Lee revealed in Comics Creators On X-Men. "He said our readers wouldn't know what a mutant was. So, okay, since their leader was Professor Xavier, and they each had an "X-tra" power, I decided to call them the X-Men. So I said to Martin, "How about X-Men?" He said the title sounded good so we went with it."

The concept of the X-Men

"The X-Men were unique among all our characters," Stan Lee stated in Comics Creators On X-Men. "With the Fantastic Four and the Avengers, you had groups of heroes that everyone liked. Nobody felt hostile to them. When I started out with Spider-Man, the police were against him and people were afraid of him. I wanted a team of superheroes that were treated like Spider-Man. Instead of being lauded by the public, they'd be feared and hated and hounded and shunned. (...) The more good things the X-Men did, the more the public hated them. I thought that was an interesting concept."

"The whole underlying message of the X-Men was about "love thy fellow man". He may have wings growing out of his back or beams shooting out of his eyes, or he may be a different colour or different race, but he's still your brother. It's wrong to hate or persecute people just because they look or act different than you, or because they worship differently than you do."

"It's tough for me to remember specific stories or villains, but I know I loved Magneto," Lee confessed in Wizard: X-Men Turn Thirty. "I thought magnetism was a great power because there was so much I could do with it. Somebody points a gun at him and he gestures and the barrel bends. We figured out a way he could walk in the air. I like villains who are more than one-dimensional: He didn't think of himself as a villain."

"On the other hand, he did call his group "The Brotherhood of Evil Mutants". We were kind of corny in those days."

"I had big plans for Quicksilver and the Scarlet Witch. I wanted them to eventually give up being villains and become heroes. That's why I used them in Avengers after I left X-Men."

Professor X's crush on a student 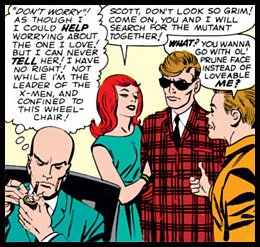 In X-Men #3, Professor Xavier was revealed to suffer a crush on his student, Jean Grey. "Stan would falter occasionally like in that one weird balloon where Professor X suddenly is thinking, "I love you passionately" about Jean Grey," subsequent writer Roy Thomas told in The X-Men Companion. "When I asked Stan about that a little later, he said, "I don't know, it just seemed like something that made sense. I tossed it in to complicate things." And the thing is that sometimes these things were best forgotten."

"It came as quite a shock when Xavier admitted it to himself," artist John Byrne recalled in The X-Men Companion. "Xavier used to be in love with Jean, but that was forgotten a long time ago."

However, many years later writer Mark Waid took Jean Grey on a journey into Professor X's mind in X-Men vol.2 #53, 1996, where she was confronted with this repressed memory one of many that should have resulted in Professor X becoming the villain, Onslaught. When it didn't, Mark Waid quit the title. "It was always my conception that Onslaught was Professor X, pure and simple," Waid explained in Wizard #90. "The nonsense about adding Magneto's evil to that mix to me weakened (the storyline) and made the whole situation a lot less interesting."

"(Onslaught) was not the most well-received storyline in the world and there are a lot of reasons for that," Uncanny X-Men writer Scott Lobdell admitted in Comics Creators On X-Men. "I can blame myself in that I was at odds with another writer over some of Xavier's buried thoughts that became the basis for Onslaught. (...) The idea that Xavier would bury his yearning for a young Jean Grey? Way too creepy for me! I think it was an idea that Stan tossed into the earliest pages of X-Men and quickly realised that student/teacher mutant love was a bad idea. I agreed and thought it should never again be revisited. To that end, I was rowing strongly against the tide and the best crossovers are the ones where everybody worked together. The crossover that eventually saw print seemed more like a work-in-progress than a finished story."

"The reason Stan Lee and Jack Kirby produced amazing stuff was because they didn't have four or five people (editors and co-writers) looking over their shoulder, changing their dialogue willy-nilly, and making them re-plot stuff halfway through a script," Mark Waid concluded. 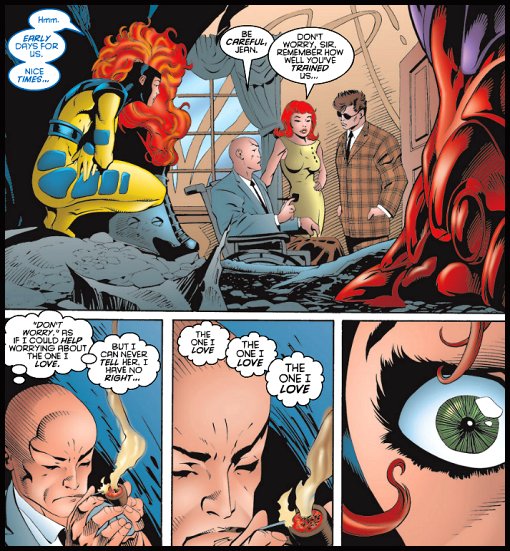 "The sales started to slip after (artist) Jack (Kirby) left the book," Stan Lee confessed in Comics Creators On X-Men. "At some point I stopped writing the book, too."

Kirby left with X-Men #17 and Stan Lee with #19 in 1966 after which the book suffered from bad stories and art until writer Roy Thomas and artist Neal Adams teamed up on it with issue #56 in 1969. However, that was too late to stop the series from cancellation. X-Men #66, 1970, became the final issue until it was revived as a reprint book with #67 in 1971.

"I always wanted Magneto to turn out to be Professor X's brother," Stan Lee revealed in Comics Creators On X-Men. "If I had stayed with the book, that's what I would have done. (...) I figured that I could come up with an explanation when I needed it: I always did. But I thought it would be fun if Professor Xavier and Magneto were brothers."

While Stan Lee wrote the X-Men, they often guest-starred in others of Marvel's books, but when he left the title, the guest-appearances also ceased, which probably didn't help the flagging sales. Following X-Men #2, the Angel appeared in Tales Of Suspense #49 and the entire team had a cameo-appearance in Avengers #3. After X-Men #5, Iceman appeared in Strange Tales #120 and the entire group in Fantastic Four #28. A cameo appearance in Spider-Man Annual #1 followed X-Men #6, and after X-Men #7, they appeared in Journey Into Mystery #109. Quicksilver and the Scarlet Witch appeared in Strange Tales #128 following X-Men #8, while the X-Men had cameo appearances in Fantastic Four #35-36 after X-Men #9. Finally, after X-Men #13, they had a cameo appearance in Fantastic Four Annual #3, and Quicksilver and the Scarlet Witch joined the Avengers in Avengers #16 following X-Men #16. Stan Lee wrote all of these appearances himself.