How he got the adamantium bones and the false memory-implants. 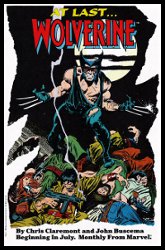 "If I'd had my way, there would have been no ongoing series at all, but instead an annual mini-series with a defined beginning, middle and end," X-Men writer Chris Claremont agreed to Berserkher.com. "The problem with an ongoing title is that you must provide perpetual grist for the mill. With a solo character, it's only a matter of time before the temptation becomes irresistible to strip-mine those aspects of his history and character which make him so interesting and mysterious in the first place."

Claremont then introduced the company Landau, Luckman & Lake in Wolverine vol.2 #5 in 1989. The local expediter, Chang, had a picture of Wolverine and himself from the 19th century hanging on the wall in the Madripoor office.

Wolverine and Jubilee visited Landau, Luckman & Lake's Hong Kong office in Uncanny X-Men #257 in 1990 where the local expediter, Rose Wu, also had a picture of Wolverine and herself on the wall, but this one was apparently taken in the future.

In Wolverine vol.2 #97 in 1996, subsequent writer Larry Hama interpreted the pictures as Landau, Luckman & Lake being an interdimensional company with doorways to other dimensions in each office. In Wolverine vol.2 #97, he also suggested that Rose Wu was a shapeshifer. Writer Howard Mackie filled in the story behind the pictures in the 1996 Logan: Path Of The Warlord one-shot.

In Wolverine vol.2 #5, Wolverine had ordered a costume from Chang for "a colleague," who turned out to be Psylocke, who started wearing the costume in Uncanny X-Men #232 in 1988. It was revealed that the costume wasn't of earthly origins when it was used to defeat Bloodscream. The origin of the costume remains unrevealed.

"As it stands now there are plans to bring Jean Grey in for an issue to do a "Casablanca"-type story," editor Bob Harras revealed in Marvel Age #78. "We also have plans for Archangel to battle Wolverine. It's, basically, anyone we can get to Madripoor."
Those stories never appeared, however, as Chris Claremont left the series in 1989 with issue #10.

When the X-Men met X-Factor during the 1989 Inferno crossover, the former X-Man Angel had been transformed into Archangel by the villain Apocalypse. In Uncanny X-Men #242, Wolverine subconsciously recognized Apocalypse's scent on Archangel, which brought forth memories of pain in Wolverine.

In 1991 Barry Windsor-Smith wrote and drew a Weapon X serial in Marvel Comics Presents #72-84. "Wolverine's adamantium heritage had never been explored, so I aimed at that device," Windsor-Smith told Wizard Tribute To Wolverine. "After I created several Weapon X stories, I had a conversation with Chris Claremont in which he told me that he had always intended for Apocalypse to be the villain behind the adamantium experiment. For no reason other than courtesy to Chris, I devised the situation where the professor in the story was taking his orders from a higher-up. Despite this hindrance to my plot, I felt it best to give Chris the chance to eventually fulfill his wish to have Apocalypse be the real villain behind the adamantium experiment. Chris never got the chance to do his ultimate origin for Wolverine, but know that whenever the professor is being belittled by the guy at the other end of the phone in Weapon X, it's Apocalypse."

In the 1990 Wolverine: The Jungle Adventure one-shot written by Walter Simonson, Wolverine found an old adamantium skull in one of Apocalypse's old lairs, but subsequently other writers have ignored the hints to Apocalypse's involvement in the Weapon X project.

"To me, Wolverine should have no official origin," Claremont told Berserkher.com. "Pieces of his life should forever remain a closed book. As for the rest, every writer has their take on the character, and their stories reflect that. What I did with Wolverine was what saw print. What I would have done remains in storage for another day, should I get the chance to write him long-term again."

Chris Claremont told Back Issue #4 about his thoughts concerning Wolverine's mentoring role with Kitty Pryde (Shadowcat): "The Kitty role is part of a larger, panoramic tapestry that had X-Men: True Friends #1-3 (1999) come out when it was supposed to, in the late 80s or the very early 90s. It would have put all this into a lot more of a context. The whole relationship between Kitty and Logan (Wolverine) is more complicated and far-reaching than had been suspected up until that point."

"Kitty was someone that Logan took under his wing because he knows things about her that she doesn't know. Even then I was playing with the idea that there is a linkage between them that goes back well before she was born. If you accept as part of the canon the timeline structured out by True Friends, Logan's thought about Kitty since the 1930s. Then you have to ask yourself, "Is the fact that the X-Men went to Deerfield in X-Men #129 (1980) an accident? Whose idea was it to go seek her out? Was it Charley, using Cerebro, or did Wolverine whisper something in his ear? If she's part of the team because he set it up, what's going on? Where is this going to lead?""

"Then if you factor in the whole Days of Future Past myth, all sorts of interesting implications come popping up. Again, that's me doing my grand design with a specific character."

When X-Men: True Friends, which is set before Weapon X, finally came out in the late 90s, it had Wolverine using his claws, but in 1993 Wolverine writer Larry Hama established in Wolverine vol.2 #75 that Wolverine didn't know that he had natural claws prior to the Weapon X project.

"The characters moved off in different directions, they got acquired by different writers and different books, and the things that I had intended got shuffled away in the mist," Claremont told Back Issue #4.

In Wolverine vol.2 #50 from 1992, written by Larry Hama, Wolverine learned that many of his memories were implants given to him during the Weapon X project. "Well, that's one of the fortunate things about Wolverine," Byrne opinionated in Back Issue #4. "It's like the Doctor Doom robots that I set up so any stupid Doctor Doom story immediately becomes about a robot. Any stupid Wolverine flashback immediately becomes an implanted memory."

Byrne had not liked Claremont's handling of Doctor Doom in Uncanny X-Men #145-147 in 1981, so in Fantastic Four #258 in 1983 he invalidated the story by establishing that the X-Men had only dealt with a Doombot, rather than the real Doctor Doom.

"And, of course, the beauty is what they have done is to basically say everything you know about his past is a lie," Claremont added in Wizard: X-Men Turn Thirty. "Therefore, most of the stories you have been reading for the past 20 years are a lie. But, of course, the stories we are telling you now could be a lie."

However, the memory implants were burned out of Wolverine's brain in Wolverine vol.2 #68 in 1993, so only the flashbacks to his past printed before that issue could be called into question.

"I decided that (Wolverine's origin) was a story that should never be told," Claremont continued in Wizard: X-Men Turn Thirty. "I feel that the drive to explain every split second of every character's existence is absurd. Where's the mystery? Where's the fun if you nail it all down?"

"To me, it was like he should be a man of mystery whose past you infer. There will be all sorts of little clues that you could perhaps list in order to build a comprehensive overview of what his past is. If someone wanted to go write a scholarly paper on who is Wolverine and where did he come from, you could take all these benchmarks and deduce from this that he is A, B, C and D."

Stories yet to be told

In Wolverine vol.2 #62 from 1992, Larry Hama unveiled a list of "the original Weapon X Project team" that included the codename Wildcat. However, that character never appeared anywhere.

Then, in Wolverine #80 from 1994, Larry Hama introduced molecular biologist Dr. Jaime Munoz who believed that it was possible to develop a bonding process for Adamantium based on a tissue sample from Wolverine. He asked for former Weapon X subjects to step forward to facilitate a breakthrough in Osteopedics. He also warned Wolverine that he had identified an unstable chain of Nucleoproteins in the tissue sample. It was a defect in Wolverine's DNA that might cause him problems in the future. However, Wolverine never approached Dr. Munoz and the subject of the DNA defect was never touched upon again.

"The problem I have with Logan is I don't see very much that's new," Claremont stated in Back Issue #4. "I see a lot of people running over the track over and over again. I don't see much of an evolution of the character. I don't see much that tells me something new in terms of insights or perceptions or what have you that we didn't have years ago. That would be my hope if I ever got to write him on a consistent basis again, to try and play with the shadings and gradations of the character to see if I could come up with some insights, some perceptions, some revelations which are small but integral, which change how you look at him."

"In terms of the X-Men, nothing in the mix of characters really suggested themselves as being gay," Claremont told Seriejournalen.dk. "I had a story with Wolverine where that could be explored. I never got around to writing it."

Asked on his online Cordially Chris forum if he had any story ideas for Logan's mother, Claremont answered, "As a matter of fact, yes." 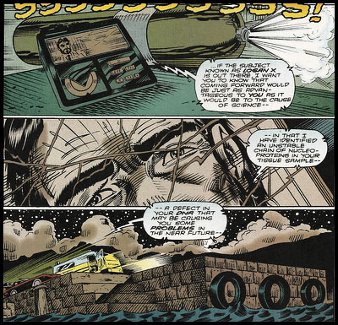 X-Men: To Serve and Protect #1