The all-different X-Men went to Australia

And encountered some unresolved mysteries, as well as some unpublished adventures of Longshot. 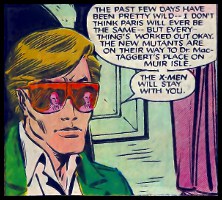 When asked in Comics Interview #11 in 1984 if there were any new characters coming up in X-Men, artist John Romita, Jr. replied: "There's a character called Vanity whose powers are connected with a mirror and other dimensions."

Such a character never appeared in the X-Men, though.

In Uncanny X-Men #184, the inventor Forge used a scanner that could tell mutants and aliens from humans, but it mysteriously failed to register Mystique as a mutant. An explanation was never given.
"The X-Men show up around page 5 of issue 200 (1985), and Cyclops joins Xavier a few pages later with the line, "Professor, we've had an adventure you will not believe, and Paris is not likely to forget anytime soon,"" writer Chris Claremont told Marvel Age #32. "What adventure is that, True Believers? Well, you'll just have to stay tuned for future announcements from Marvel."

Claremont was hoping to do a one-shot or a limited series about what happened to the X-Men in Paris in the space of those few pages, but that adventure never appeared either.

"When Havok went back into the X-Men, that sort of took care of the Havok And Polaris series we'd planned," X-Factor artist Walter Simonson told Marvel Age #68. "Some of the ideas for that will in fact be turning up in the Avengers (which I'm writing)." 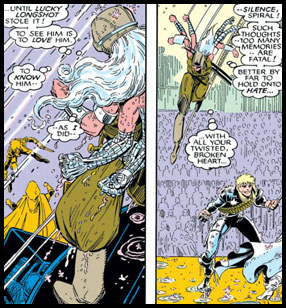 In Marvel Age Annual #3, 1987, a Longshot graphic novel by Ann Nocenti and Art Adams was announced: "Longshot will return to his home world where he will start a rebellion to free his people. All his nemeses from his Limited Series, including Mojo and Spiral, will counter-attack. Longshot will discover just how brutal a rebellion can be and how merciless the forces bent on the rebellion's destruction truly are."

However, the graphic novel never appeared. "Chris (Claremont) kept running in, saying, "Can Arthur do this?" Adams revealed in Back Issue #29. "Chris basically stole him from me and made sure I could never see him again," Nocenti added.

Claremont stole both Art Adams and Longshot for X-Men Annual #10, 1987, where the rebellion on Mojo World had failed, and Mojo sent Longshot to the X-Men on Earth as part of a plan to enslave them, too. The plan didn't succeed, but Mojo decided to leave Longshot with the X-Men to annoy Spiral. However, Longshot suffered from amnesia during his entire time with the X-Men and didn't even recognize Ricochet Rita when he saw one of her movies in Uncanny X-Men #224 in 1987.

In X-Men Annual #12, 1988, it was revealed that Rita had become one of Mojo's slaves, and she was last seen as guardian for Mojo's X-Babies in the 1989 Excalibur: Mojo Mayhem special edition.

In X-Factor Annual #7, 1992, writer Fabian Nicieza revealed that Spiral was actually Ricochet Rita who had been transformed and sent back in time by Mojo.

Dead to the world

Following a televised battle against evil forces in Uncanny X-Men #227 from 1988, the world assumed that the X-Men had died an assumption which the X-Men wanted to use for their own benefit for a while. In Uncanny X-Men #229, also from 1988, the wizard Merlin's daughter, Roma, ensured that the X-Men would only be visible to the naked eye and to the computer at their new headquarters in the Australian outback to help them keep their being alive a secret from the world.

However, at some point in 1991, between Uncanny X-Men #279, page 12, and X-Men vol.2 #1, the X-Men became visible to all scanners once again. X-Men vol.2 #1 started with the X-Men being scanned by computers at the Xavier Institute. It is possible that if Chris Claremont hadn't resigned as X-Men writer and had written the stories in between those issues, there would have been an explanation of how the X-Men became visible again, but the subsequent writers either ignored or forgot about the X-Men having been "invisible" at all. In Excalibur #41 from 1991, writer Scott Lobdell referred to television footage of the X-Men from as far back as the 1990-1991 X-Tinction Agenda crossover in Uncanny X-Men #270-272, creating quite the unexplained conundrum.

Apparently, Roma's spell simply ceased working and none of the characters felt the need to comment on the loss. 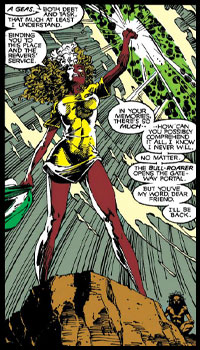 The mysterious mutant Gateway, who had the convenient ability to transport people from place to place, came along with the X-Men's new Australian headquarters. He had served the villainous Reavers under threat of desecration of his people's holy place, so they'd never know peace, wandering the dreamlands as slaves to outsign spirits forever.

In Uncanny X-Men #269 from 1990, Rogue absorbed Gateway's ability and memories and learned that he had a debt and a task binding him to both the place and to the Reavers' service. The nature of Gateway's debt and the secret of his task remain unrevealed, as does the fate of his people.

In Uncanny X-Men #246 from 1989, Dazzler looked into the Siege Perilous and saw that all her possible life choices led to her death. By denying her fate, Death took her on her word and said, "The life thou hast chosen hath made thee my beloved handmaiden" a destiny which was sealed in blood. Dazzler was reminded of the "deal" in Uncanny X-Men #247, but Chris Claremont didn't touch on the subject again before Dazzler made her last X-Men appearance in Uncanny X-Men #260 in 1990, and subsequent writers didn't touch the subject either.

Then, many years later, in 2006, Chris Claremont returned to the character in the pages of New Excalibur, and in issue #1 Dazzler died, but mysteriously returned to life. The Marvel Previews solicitation for New Excalibur #8 said: "Dazzler died. But for some reason, it didn't stick? How is this possible? Dazzler and the New Excalibur team attempt to find out what has happened to her. The answer will shock you! "So Why Is It I'm Not Dead?" Part 1 (of 2)!"

In X-Men: Die By The Sword #2 from 2007, also written by Chris Claremont, Dazzler stated, "Whatever way I manage to get myself killed, I always seem to get better," and once again she got killed in X-Men: Die By The Sword #4 in 2008, and miraculously returned to life in #5. Since then, Dazzler has rejoined the X-Men, but nothing has developed further on her inability to die. The mystery remains unresolved.

Longshot left the X-Men in Uncanny X-Men #248 in 1989 to go on a search for his identity in an ongoing series of his own written by Ann Nocenti and pencilled by Art Adams. "Originally Ann had written a plot for Longshot Graphic Novel," Adams explained in Marvel Age #71. "But Ann decided she'd just as soon not do the graphic novel, and just go ahead and do something else. I think, since she had written the graphic novel plot, and she had gotten better as a writer, she looked at it and didn't feel very good about it."

"I think all we've decided so far is that Longshot's going to travel around and have adventures," Adams continued. "We've talked a little bit about it, mostly about various characters we'd both like to have something to do with, so we'll probably be guest-starring lots and lots of Marvel characters. I think we have plans so far for the Hulk and Thor."

"I think when we get to the series I'm going to have Mojo in some sort of exoskeleton, that we really don't see but that'll be under clothes or something, so he can walk around. (...) I'm hoping that in some issue of Longshot I can bring back one of those old Kirby monsters. (...) I expect there'll be quite a supporting cast. Ann's already mentioned that in the first issue Longshot's supposed to meet some kind of zombie guy who's a humorous zombie. I figure he's going to stay around for a few issues."

In Marvel Age #67, it was announced: "We've got definite plans for a new series guest-starring Mephisto. It'll be called Longshot, and if you think that means it's going to pit the master of evil against everybody's favorite incredibly lucky X-Man, well, give yourself a gold star! And just for good measure, we're throwing in lots of other familiar faces from around the Marvel Universe too! Stay tuned to future issues of Marvel Age Magazine for more details."

However, for reasons unknown the Longshot series never appeared. 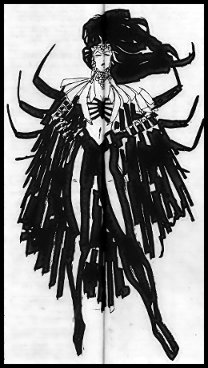 In Uncanny X-Men #249 from 1989, the villain Zaladane surprised Lorna Dane (Polaris) by calling her sister. It appeared as if their family relation would never be explained following the death of Zaladane in Uncanny X-Men #275 in 1991, but it is possible that Chris Claremont had intended to revive Zaladane and resolve the issue. Certainly, Amazing Heroes #192 featured a design sketch by Jim Lee of Zaladane along with some for Omega Red, who at the time was set to debut in X-Men vol.2 #3 in 1991. With Claremont's departure, the resurrection of Zaladane just ended up not happening.

Ten years later, in 2001, when Claremont left Uncanny X-Men for the second time to write X-Treme X-Men, Zaladane's resurrection ended up not happening again: "Also lost in the shuffle: (...) a story in the Savage Land reintroducing Zaladane as a vengeful earth-oriented character, who manipulates tectonic plates the way her sister, Lorna, does magnetism, and her desire to avenge herself against Magneto (who "killed" her in Uncanny X-Men #275) by destroying Genosha (an island nation which Magneto ruled at the time)," Claremont revealed to Cinescape.com.

At the time, Marvel instituted an editorial policy against resurrecting dead characters, which may explain why Zaladane's resurrection didn't happen in the 2001-2002 X-Treme X-Men: Savage Land mini-series either, but Genosha did end up getting destroyed, although by Sentinels, in New X-Men #115 in 2001, written by Grant Morrison.

The computer and the sword

Meanwhile, a mystery was building surrounding the computer at the X-Men's Australian headquarters. In Uncanny X-Men #249 from 1989, it seemed capable of self-repair, and when the Reavers reclaimed the compound, the computer surprised and amazed even them. In Uncanny X-Men #252 from the same year, Bonebreaker noticed that the computer was evolving almost as if it was growing like a living organism. Neither Claremont, nor any other writer, ever followed up on this development.

In the 1982 Wolverine Limited Series, Wolverine's girlfriend Mariko had become head of the Yashida clan, and she gave the clan's honor sword to Wolverine in issue #4. In Uncanny X-Men #252 in 1989, where the Reavers had reclaimed the X-Men's Australian headquarters, Lady Deathstrike left the sword there to be reclaimed by the winner of the final battle between her and Wolverine. However, that battle didn't take place before Chris Claremont left the series, and the whereabouts of the sword was forgotten about by Wolverine writer Larry Hama, who showed it back in Mariko's possession without explanation in Wolverine vol.2 #57, 1992.