The All New International X-Men

The new X-Men were actually born to tap into Marvel Comics' foreign market. 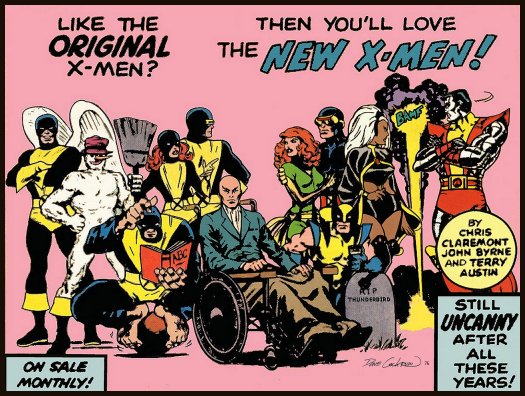 "(In 1973, '74) Stan Lee and I had a meeting with (the President of Marvel Comics) Al Landau," then Editor-in-Chief Roy Thomas recalled in Comics Creators On X-Men. "Al suggested Marvel do a group of foreign superheroes... characters from countries in which Marvel sold a lot of comics. Stan and I liked the idea."

"Al Landau had his own company called Transworld, which at that time was reselling Marvel's work overseas by the page," Thomas added in The X-Men Companion. "He knew that if we, for example, had big markets in three or four countries and we had a team that had three or four characters in it, one from each country, we'd have a terrific hit on our hands overseas."

"I had been wanting to bring back the X-Men for a while," Thomas told Comic Creators On X-Men. "I said, "Look, the group we should do as the international team is the X-Men. Take a couple of the original members, like Cyclops, and have them go looking around the world gathering up mutants from other countries."

"I had the idea that Cyclops and one or two others- I'd probably have gone for Marvel Girl, myself -  would have a ship that would float around from one country to another, hidden by clouds," Thomas revealed in Comic Creators On X-Men. "It could cross borders without having to go through customs."

"Sort of a Noah's Ark thing, that would fly around with a portable cloud around it," Thomas added in The X-Men Companion. "It would hover over various countries in search of different X-Men and that would get them into adventures. However, I obviously expected to get up to about four, five, or six characters that would be pretty regular and then, of course, you bring others in, you take them out."

"I was thinking of the international flavour of a team like the Blackhawks, who came from six or seven different countries," Thomas told Comic Creators On X-Men. "I think I mentioned that to Dave Cockrum and Mike Friedrich, who were supposed to be the original artist-writer team."

"Dave Cockrum was brought to it because he was a good, young, available artist who was interested in the assignment. He had been doing a lot of different character designs, and we were going to have to create new characters."

"I was hanging around Marvel in those days looking for something to do," Dave Cockrum recalled in The X-Men Companion. "One day I had a few minutes alone with Roy when he wasn't doing anything and we started to kick around the idea of the X-Men. He said that he had always wanted to start a new group and sort of treat them like mutant Blackhawks, an international group. I think they would be based on the island that Magneto used to have that was invisible to tracking devices and radar and which you couldn't see. Magneto had it in a Sub-Mariner crossover (in X-Men #6) and we had talked about the possibility of the X-Men appropriating that island and operating out of there."

"This all happened shortly before I left the Editor-in-Chief position," Thomas continued in Comics Creators On X-Men. "I think the idea sat on the shelf for some months after that. When Len Wein came on as Editor-in-Chief, he sort of appointed himself writer."

"I don't know what the problem was, but the X-Men project went on hiatus for a while," Cockrum recalled in Comics Creators On X-Men. "When it came back, Mike was occupied with other stuff and he had to pass, so Len was brought in."

"By the time the book came out (in 1975), I was long gone from the Editor-in-Chief job," Thomas concluded in Comics Creators On X-Men. "They completely lost sight of the idea of selling the book in a lot of different countries. I dont know why Al Landau let that whole part of the idea be ignored, but at least it was there long enough to have been an impetus to get the new concept going, and then somehow everybody lost the road map. I'm sure I mentioned that to Mike or Dave originally, but somehow or other, by the time Len was writing the book, the whole idea of having the new heroes be from countries where Marvel sold a lot of comics got lost."

"Roy gave me some notion of what he'd like to see in terms of international characters, but ultimately, of course, the new team didn't really wind up being what Marvel expected," Cockrum revealed in Comics Creators On X-Men. "I got together with Len Wein and we kicked around some ideas and then I just went home and started drawing characters."

"The principal idea was that if we had all of these foreign characters, we could export the books to their respective countries," artist Dave Cockrum recalled in Wizard Magazine. "Then we went and picked a bunch of nationalities whose countries weren't likely to take the books to market, places like Russia and Africa."

"It had been cancelled with the old cast initially, and it wasn't selling very well even when it was being done by Roy Thomas and Neal Adams and Tom Palmer," Len Wein reasoned in The X-Men Companion. "If that group of talent couldn't make that group of characters sell...  The decision to keep even Cyclops was ours. We just wanted to tie the new series to the past, something to make it recognizable as the X-Men. Cyclops was the only great character among the old X-Men because of the eyeblasts, and the sense of tragedy about the character."

"With the exception of Cyclops, I never considered the original characters to be all that strong," Cockrum told Wizard #33. "So I was happy for the chance to reshape things. I practically started from scratch."

NOTE:  For more insights into Dave Cockrum's character design process for the all-new X-Men, check out the article HOW TO CREATE A LEGEND. 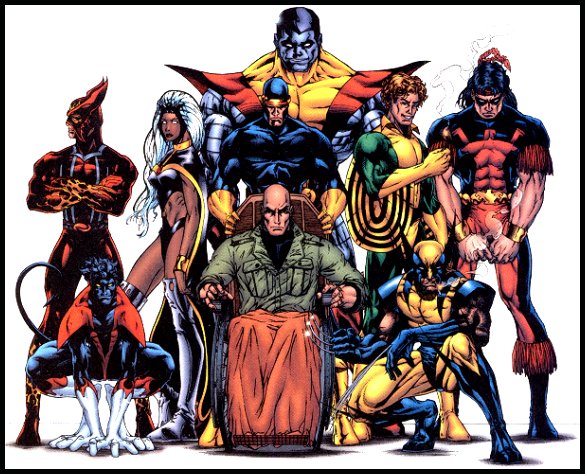 "Marvel were going to continue reprinting in the regular title and do a Giant-Size series," Cockrum revealed in Comics Creators On X-Men. "The first book, Giant-Size X-Men #1 Len and I plotted it together, though there were also a number of other guys in the bullpen, including Chris Claremont, who sat in on the sessions and kicked in ideas. We hammered out the first story and decided we didn't like it so we threw it out and started over again. The story that came out was actually our second try."

"What I remember primarily is that the original story idea was absolutely horrible," Cockrum told The X-Men Companion. "It was something to do with sending the new team down to South America to rescue the old X-Men and finding a whole bunch of Aztec gods walking around and raising hell and having to combat the Aztec gods who would wind up to be the original X-Men dressed as Aztec gods and I was going, "Nooooooo""

"I don't know if anybody else disliked it as much as I did, but I finally said, "Listen, I don't think I can stand this" and Len went out and took a pill - he was taking a lot of tranquilizers in those days. And we all got up and walked around, and sat down and started thinking about it again." 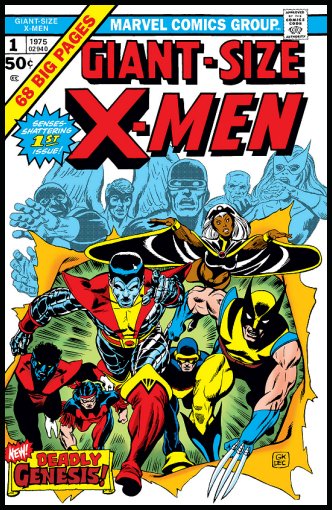 "When we were first planning out that first issue, we decided what we were going to do was have it be an aptitude test or an entrance exam or something like that," Cockrum revealed in The X-Men Companion. "They would be sent off to rescue the original X-Men, but the original X-Men would not actually be in any danger. We figured if it's an entrance exam, theoretically, there are people who are going to flunk as well as people who pass, and so we had Banshee and Sunfire, and we were gonna flunk 'em. Then, we thought, "Well, that doesn't seem fair, we ought to have a new guy to flunk too, a new guy who's unsuitable." So that was what Thunderbird was for, to be a flunker. He was unsuitable because he was anti-social."

"But at the last minute well, I liked Banshee and we all liked Thunderbird, so we figured to hell with it. It turned out not to be a test anyway. So we had Sunfire, who nobody much liked, go off in a huff, and we kept Banshee and we kept Thunderbird. But then we didn't know what to do with Thunderbird because we never thought him out. It was easier to kill him off than to think him out."

"I liked the new characters and thought they were strong enough to carry the book," Cockrum told Comics Creators On X-Men. "We actually got some angry letters when we came out with the new guys. "How dare you get rid of the old guys?" That sort of thing."

"Len Wein wound up becoming Editor-in-Chief and had to give up a book or two. Len Wein and I had actually plotted the Nefaria story (in X-Men #94-95) before Chris was hired. It was originally going to be Giant-Size X-Men #2, but Marvel decided not to go with the Giant-Size title. The company re-established the regular X-Men title and broke the story into two parts."

"When I did the first few stories, Giant-Size #1 and the two-parter that Chris ended up dialoguing, Chris Claremont was very excited about things. He made some good suggestions," Len Wein explained to Comic Book Profiles. "At the time, I was Editor-in-Chief and could only write a book a month with the schedule I was keeping. I was writing Incredible Hulk and the X-Men so something had to give. The Hulk was my favorite book and my favorite character so I had to find someone to take over the X-Men. Chris' enthusiasm made him a logical choice."

"Chris was chosen and that turned out to be a good thing," Cockrum recalled in Comics Creators On X-Men.

"I was going to bring characters in and out of the book, to keep you on your toes," Wein revealed in The X-Men Companion. "Professor X was going to erase knowledge of the X-Men from the rest of the world, any record of Colossus and Nightcrawler. The people in charge of those records would wander into the room one day and put them in the paper shredder and burn away the files and never notice they weren't there anymore. I was going to have Professor X solve the problems of this international group by eliminating evidence. And then eventually someone was going to stumble over something and go. There was going to be a big conflict. He'd erased the evidence of their existence from the rest of the world, and other people would discover that these characters had been elsewhere first. (...) Chris did other things."