The unrevealed mysteries of Mystique

And the unpublished debut of Destiny, Rogue and the Hellfire Club.

The shapechanging Mystique, who would become an important figure in the X-Men mythology, was originally introduced in Ms. Marvel, written by Chris Claremont. In Ms. Marvel #18 from 1978, it was established that Mystique was working for a Lord who remained unidentified, but it was probably a Lord of the Hellfire Club an organization of rich and powerhungry mutants.

However, Ms. Marvel got cancelled in 1979 because of poor sales before it was confirmed if Mystique was working for the Hellfire Club, so their "plan" was never revealed. The Hellfire Club, as well as Mystique's partner Destiny and their adopted daughter Rogue, would also have been introduced in Ms. Marvel if the series had continued. When the characters showed up in X-Men instead, Claremont used their unreleased Ms. Marvel appearances as backstory, the reason being that those stories were supposed to see print in Marvel Fanfare.

The stories never appeared in Marvel Fanfare, however, and Claremont considered doing them as back-up stories for Classic X-Men instead, but that ended up not happening, either.

Finally, in 1992, Ms. Marvel #24 turned up in Marvel Super-Heroes vol.2 #10, and the first part of the continuation intended for Marvel Fanfare turned up in Marvel Super-Heroes vol.2 #11 with a 10-page epilogue written by Simon Furman that wrapped up Claremont's unfinished story in which Mystique's hatred of Carol Danvers was explained with the precognitive mutant Destiny having predicted Rogue's death at the hands of Ms. Marvel.

However, Simon Furman had no idea of what Claremont had planned and made an error in including Destiny in his epilogue. Destiny would have ended up in prison in Claremonts unpublished continuation of his Ms. Marvel story, because when Rogue made her official debut in Avengers Annual #10 in 1981, she attacked Ms. Marvel permanently absorbing her powers and mind in order to help Mystique bust Destiny and the other Brotherhood members out of prison.

Rogues attack on Ms. Marvel wasnt shown until Uncanny X-Men #203 in 1986, and in Uncanny X-Men #182, 1984, Rogue explained her reason for the attack: "Hatred. Vengeance. We'd fought a few months earlier. Ah'd almost been killed. Ah wanted to get even."

The fight Rogue mentioned must have happened in the storyline that was begun in Marvel Super-Heroes vol.2 #11. Unfortunately, that storyline was never finished.

When Sebastian Shaw of the Hellfire Club mentioned a previous encounter with Rogue in X-Men Annual #7 from 1984, it was probably also a reference to an event in the untold Ms. Marvel story. Rogue also referenced the fight in Uncanny X-Men #209, 1986: "When we first tussled long before ah joined the X-Men Shaw near punched my ticket."

Chris Claremont confirmed in his online Cordially Chris forum that when Mastermind of the Hellfire Club exacted revenge on Mystique in Uncanny X-Men #170 in 1983, by troubling her with nightmares and causing Rogue to leave her, it was for something that had happened in the unpublished Ms. Marvel stories. Mastermind also assaulted Emma Frost of the Hellfire Club in Uncanny X-Men #169, 1983. His hatred for Frost was also left unexplained, but before she was attacked, Frost feared for Shaws safety.

Whatever the story in Ms. Marvel #25 onwards was about, it obviously involved a conflict between Mastermind and the Hellfire Club (Shaw and Frost), and Mastermind had his plans thwarted by Mystique in some way. 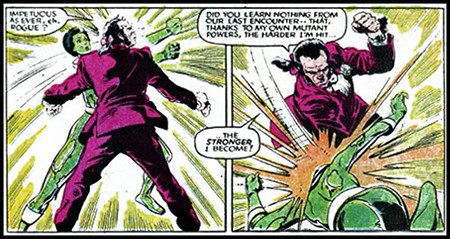