X-23 and Daken have both come to the island nation of Madripoor but each for very different reasons. Together with her traveling companion Gambit, X-23 has learned that Malcolm Colcord, a man directly responsible for horrific acts on mutants and indirectly responsible for her existence, has begun to recreate his Weapon X program on Madripoor. X-23 wants very much to prevent this. Unknown to her, her pseudo-relative Daken, the son of Wolverine, is behind Colcord’s operation and has recently taken control of Madripoor’s underworld. X-23 & Daken’s conflicting interests are certain to ensure a collision!

With the option of taking over Romulus’ empire no longer being a possibility and his recent actions leading to him to have very few friends, Daken fakes his death in order to start anew. With a new costume to hide his identity, he travels to Madripoor to create his own empire. [Daken: Dark Wolverine #3-4]

Daken quickly cements control over all of Madripoor by gaining leverage over its power brokers. He steals from the island’s crimelords secret ledgers which contain records of all of their activities. Simultaneously, he kidnaps the police chief’s family and unleashes an EMP which cripples the city and foments riots and general chaos.

Daken restores order through the reluctant Tyger Tiger, whom he sets up as the public face of his new organization and to whom the remaining crimelords swear loyalty in order to continue their operations. While they answer to Tyger Tiger, she in turn will receive instructions from Daken.

Secretly, Daken has brought Malcolm Colcord to Madripoor and funds his research. While Colcord hopes to recreate the Weapon X project, Daken intends to enhance his own powers to rival that of the deposed Romulus. However, Daken soon learns that Colcord has been secretly attempting to artificially create a transferable healing factor, something not part of their agreement. [Daken: Dark Wolverine #7-8]

After a confrontation with “Hellverine,” X-23 has begun to question the nature of her soul, due to the fact that she is a clone of Wolverine himself. Wishing to exercise her own choices regarding her future, she leaves Utopia on a journey of self-discovery. [X-23 (2nd series) #1-3]

Sometime later, in New Mexico, X-23 is kidnapped by Miss Sinister, who wishes to use X-23 in her experiments to create a cloned body with a healing factor, into which she can transfer her consciousness. With the help of Gambit, who has been following her, X-23 escapes and destroys Miss Sinister’s lab, but not before learning of Malcolm Colcord’s involvement in Miss Sinister’s experiments. Believing he wishes to recreate the Weapon X program or even the Facility, the lab which created her, X-23 is determined to find and stop Colcord. [X-23 (2nd series) #6] 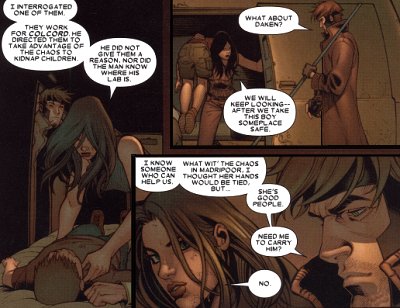 X-23 and Gambit arrive in Madripoor, only to find the island in chaos, the result of an electromagnetic pulse, which has obliterated all electricity and electronics. In short order, X-23 identifies Daken on the street by his similar physique to Wolverine. However, before she can intercept him, she witnesses the kidnapping of a child and decides it is of more immediate importance. To X-23’s surprise, the kidnappers turn out of to be agents of Colcord, who has directed them to take advantage of the chaos and kidnap children. Unfortunately, despite torture which led to his death, X-23 learns that the man knew neither the reason for the kidnappings nor where Colcord’s lab is.

When X-23 voices her desire to take the kidnapped child to someplace safe, Gambit suggests his old acquaintance, Tyger Tiger, who has been working with the police to restore order to the city. After taking the boy to some nuns who will reunite him with his parents, Tyger explains that the other children whom the nuns are watching are survivors of experimentation. She had been about to launch an investigation when the chaos erupted. She also explains the situation with Daken. To Tyger’s surprise, X-23 reports that she not only knows the party responsible for the children’s experimentation but that she believes Daken knows where he is.

Learning this, Tyger suggests a plan. The next morning, X-23 and Gambit arrive at Tyger’s office, pretending to have never met before. X-23 demands information on the whereabouts of both Daken and Malcolm Colcord, both of whom Tyger pretends to have no knowledge. 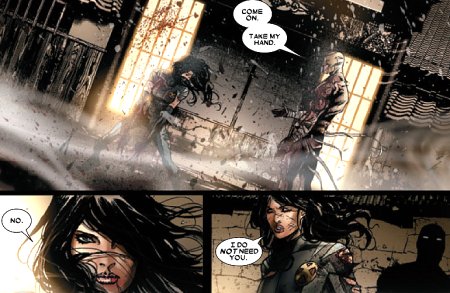 During the conversation, X-23 deliberately lets slip that she is a clone of Wolverine, a fact that intrigues Daken, who has secretly been listening from a hidden compartment. Daken follows X-23 and Gambit after they leave and introduces himself. He remains skeptical regarding X-23’s claim and goads her into a fight in which they seem to be more or less evenly matched. Seemingly convinced, Daken asks X-23 to join him but she immediately refuses and walks away.

Rejected, Daken returns his attention to Colcord and chastises him regarding his unauthorized side project in the development of a healing factor serum. When Daken also voices X-23’s opinion that Colcord might be rebuilding the Weapon X project, Colcord realizes that X-23 is on the island. He then convinces Daken that the healing factor project was to create viable test subjects, which is no longer necessary if he could use X-23. Already the perfect test subject, Colcord believes she can provide a solution in weeks, as opposed to months.

Suddenly, X-23 and Gambit attack, having followed Daken. However, Daken had been aware all along and had given a syringe to Colcord during their conversation. Colcord uses it to knock out X-23 as she tortured him, while Daken manages to take out Gambit. The two men leave Gambit behind, while they take X-23 back to Colcord’s lab.

At his lab, Colcord takes every precaution with X-23, keeping her shackled in cramped isolation cabinet until her first procedure. Even then, she is kept immobile and wheeled to the operating room. However, just before the procedure is to start, Daken uses his claws to weaken X-23’s bonds. Shortly after Daken leaves, X-23 escapes, killing her tormentors in a berserker rage. She regains her composure just before Daken returns and immediately realizes that he has dosed her with the trigger scent, of which he learned from Colcord’s files. Daken explains that he allowed Colcord to capture her in order to learn his ultimate plans regarding a new Weapon X program. 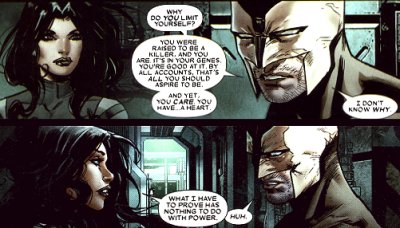 Together, Daken and X-23 descend deeper into the facility and discover cells holding the horrific results of Colcord’s experiments, mutated humans enraged by a version of X-23’s trigger scent. After killing them all, the two continue to search for Colcord, killing everyone in their path. They soon find Colcord himself but overhear him talking to his bodyguard about a bomb, which will explode in minutes. Rather than attempting to find or disarm the bomb, Daken and X-23 instead allow it to detonate, destroying the facility and killing Colcord. 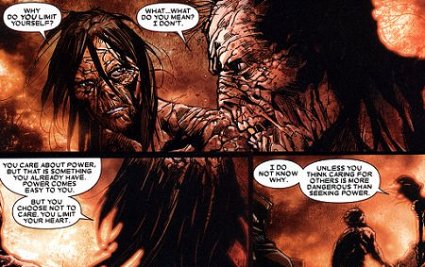 Thanks to their healing factors, both emerge from the facility’s rubble alive. The threat of a reconstituted Weapon X project evidently over, they part ways, but not before they share a, albeit brief, moment of understanding each other. While both are struck by the similarities they share, they are even more surprised by the innate differences in what motivates them. Daken seeks power and seemingly has no heart, whereas Laura limits her power in order to try and regain her lost sense of humanity. Unfortunately, Daken and X-23 are unaware that one of Colcord'S men ahs sold samples of the altered trigger scent to a mysterious woman. 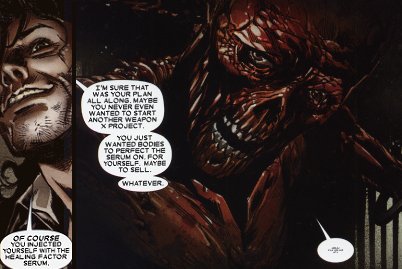 The next day, reunited with Gambit thanks to Tyger Tiger, X-23 leaves Madripoor with Gambit. Unknown to X-23 and Gambit, however, is that they also have left behind the still-living Malcolm Colcord, who had injected himself with the completed healing factor serum just before the explosion. Though still alive, Colcord has barely healed and is living with a nightmarish physical condition. Worse, he is a prisoner of Daken, who revels in his control over Colcord, Madripoor and, most importantly, his own fate.