Several years ago, Senator Robert Kelly was the driving force behind the Mutant Registration Act, a law that forced mutants to officially register and declare their abilities. The mutant terrorist, Mystique, led her Brotherhood of Mutants in an assassination attempt against him but failed, due to the X-Men’s interference. Today, Mystique has returned back to the foreground as Senator Kelly announces his plans to run for President of the United States. With the issue of the mutant threat being used to lead his campaign, Kelly stands a good shot of winning a close election that will determine the fate of man and mutant. The X-Men must race against time to save Kelly from the Brotherhood, but things are amiss already as they question why Mystique would make her intentions so obvious. What the X-Men do not realize, however, is that Mystique’s plan deals with more than just assassinating Kelly. To shape the future of mutantkind, Mystique has tailored Stryfe’s deadly Legacy Virus, originally designed to kill mutants, to only affect those without the mutant gene; all those born human! Split into two forces, the X-Men must protect Senator Kelly from the reformed Brotherhood of Mutants and also find out what Mystique is doing on Muir Isle. However, before all the madness comes to an end, death will strike close to the X-Men and shake the very foundation of the dream. Can the X-Men save a world that fears and hates them? Can a cure for the Legacy Virus be found? Better yet, will the dream survive after all is said and done?

On the eve of the presidential election, Senator Robert Kelly gives his first speech of the day at the Lincoln Memorial. His campaign is simple: the threat of mutantkind must be dealt with. Around the world, mutants and humans alike watch his speech. While some are in disbelief that Kelly can say such things against those who have saved his life numerous times, others vow to remove Kelly from the playing field if he makes any move against mutants.

Elsewhere, Mystique tests her new version of the Legacy Virus on a branch of the Hellfire Club, who are out on a yacht in the Atlantic. As all humans aboard die a horrible death, the test is a success and, with her new plan ready to go, Mystique destroys the yacht and heads to Muir Isle to start the second phase of her plan. Once she reaches there with Toad and Sabretooth, she is found by Wolfsbane, who runs back to the research facility to call the X-Men, which is exactly what Mystique wants.

Meanwhile, at the Xavier Institute for Higher Learning, the X-Men watch Kelly‘s speech and worry about the repercussions. Gambit’s team of X-Men finish a session in the Danger Room and meet with Xavier, who tells them that recent information makes him suspect that the terrorist Mystique may be planning to assassinate Kelly once again. To that end, he has planted Cable in Kelly’s support staff to watch over the man. Before Xavier proceeds, he telepathically calls Wolverine, who is helping Rogue in the woods to cope with her powers, which are spiraling out of control. Wolverine meditates with Rogue, who is randomly displaying the powers of people she has absorbed in the past. Suddenly, Rogue hears Mystique laugh in her mind and flips out. Rogue accidentally takes out Wolverine, but Bishop stops her, by absorbing all the extra energy she is expending. After everyone recuperates, Rogue explains that she senses that Mystique is on Muir Isle. Xavier tries establishing mental contact with Moira, but something blocks him, so he allows Rogue, Wolverine and Bishop to go to Muir Isle, while the rest of the X-Men keep an eye out on Kelly.

Cable, Gambit, Beast and Colossus go to Boston, where Kelly is ready to give his final speech for the night. Kelly begins his speech but, before he can finish, the Brotherhood of Mutants attacks – Avalanche, Post and the Blob burst into the conference room. Cable, Gambit and Beast fight against the three mutant terrorists, while a man in the corner watches the whole thing. Just as Post is about to kill Kelly, Colossus ends his guise as a secret service agent and stops Post, blocking his attack on Kelly with his own steel body. Cable discovers that the man watching is actually the dying Pyro, and learns from him that the female Mastermind is manipulating the entire area. 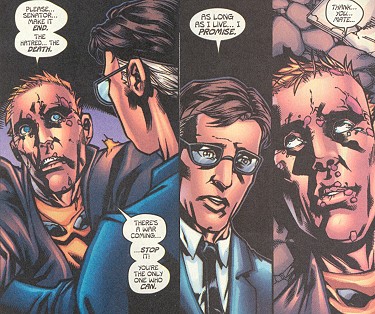 Cable mentally locates Mastermind and stops her with his Psimitar weapon, ending her illusion. The X-Men discover that, the whole time, Post was not fighting Colossus, but was secretly making his way to Kelly – none of them are close enough to stop him from reaching the senator. Just as Post is about to kill Kelly, Pyro unleashes his fire upon Post, killing him. Yet, having overtaxed the powers of his Legacy virus-ridden body, Pyro dies as well. With his final breath he asks Kelly not to punish mutants and to avert the upcoming war, because he is the only one who can. The X-Men return to the mansion, but Cable stays behind to keep on eye on Kelly.

As Rogue, Wolverine and Bishop reach Muir Isle, the entire island blows up, catching the three X-Men in the blast. The entire lab is in ruins, Wolfsbane stuck between the debris, and an easy prey for Sabretooth. However the villains wastes precious time taunting her, and eventually Bishop arrives to free her and send her to find Moira, while he fights Sabretooth. Using the energy he absorbed from the explosion, Bishop knocks Sabretooth out. Once he finds his way out of the ruined building, Bishop finds Senator Kelly, who tells Bishop that mutants are a threat that needs to be dealt with. Bishop realizes that “Kelly” is actually Mystique and begins to reason with her, but Wolverine interrupts and tries to stop Mystique in his usual way – with his claws. While Bishop and Wolverine argue over their methods, Mystique escapes.

Wolfsbane finds Rogue, who has defeated Toad, and the two head to find Moira, when suddenly Mystique blasts Wolfsbane with a prototype of Forge’s neutralizer gun, thus taking away Wolfsbane’s mutant powers.

Rogue tries to stop the near-insane Mystique, but the shapeshifter takes advantage of Rogue’s love for her surrogate mother and stabs the girl in the gut when her guard is down. Elsewhere in the complex, Wolverine and Bishop find the dying Moira and discover that she has found a cure for the Legacy Virus, but Mystique has the stabilizing agent they need. The three find Mystique, who threatens to kill Wolfsbane, but Rogue, having recovered from the gut wound due to Logan’s healing factor, sneaks up behind Mystique and stabs her with her bone claws.

In Boston, the media argue over the discovery of the notes for Kelly’s speech and realize that Kelly was going to call for the end of the persecution of mutants before the Brotherhood attacked. While the rumor circulates, Cable meets with Kelly and the two make a vow to make a better future for man and mutant.

On Muir Island the X-Men board a jet to fly home with Wolfsbane, Moira and the captured Mystique. However, Moira is dying and the X-Men are heading into a storm over the Atlantic. Rogue begins surgery making use of the memories of Cecelia Reyes, a trauma surgeon, but realizes that Moira is not going to make it. Due to the importance of her knowledge on the Legacy cure, Rogue wants to absorb Moira, who fears that there is too much of a risk of an error occurring. 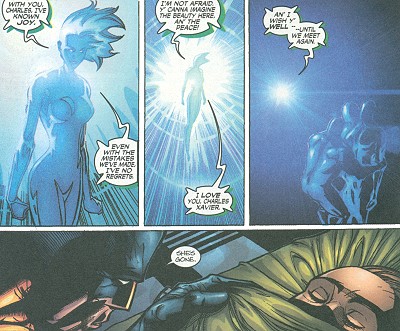 Instead Moira calls for Xavier in her mind and Xavier hears her. He and Phoenix use Cerebro to telepathically reach Moira and learn about her condition. Moira and Xavier begin a data transfer so the cure can be saved, but all of a sudden Xavier refuses to let Moira die without him and refuses to let go of her mind.

Phoenix is unable to save Xavier all by herself, so she telepathically reaches out for Cable to aid her. Although at the time he is guarding Kelly, who gives his speech again, Cable enters the astral plane and helps Jean to convince Xavier to let Moira go. Eventually the professor listens to reason and after Moira professes her love for him, she finally passes away. 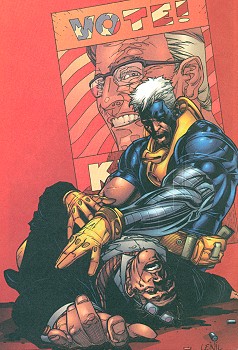 Cable senses a wayward thought and rushes back to his body, but he only returns to Kelly just in time to see him shot by a fanatic human, who is angry that Kelly was supporting mutant rights. As Kelly dies in his arms, he tells Cable never to give up on the dream.