After awaking from a coma which he has been in since the Muir Island Saga, Legion finds his fragmented mind healed. He wants to make up for his past shortcomings and the pain he caused his father, Charles Xavier. To do that, Legion comes up with a plan to travel back in time to kill Magneto, the greatest opposition, that Xavier's dream of peaceful coexistence between mutants and humans, ever faced. Some of the X-Men go after him, but they fail to stop him. However, Legion's plan backfires as he accidentally murders Xavier, and as a result, erases himself from history. The early death of the founder of the X-Men creates an altered history that replaces the mainstream Marvel Universe.

(time-traveling 20 years to the past)

Mystique enters a hospital to assassinate Legion who killed her closest friend, Destiny. Before she can kill David Haller, However, he awakes from his coma, with his formerly multiple personality-disordered mind now fully intact. X-Factor attempt to capture Mystique and take her into custody. Meanwhile, Legion approaches Xavier in one of the Professor's dreams and tells him that he thinks that life would be better for mutants and humans if Magneto never lived. Xavier replies that he cannot be sure what outcome would have occurred under different circumstances. Legion rises from his bed and passes Mystique a message from the late Destiny, before X-Factor can capture her. However Legion then teleports the mutant team away and also departs, leaving the shapeshifter behind to think about what Destiny had said. 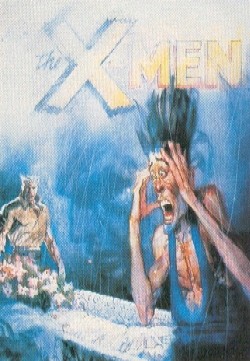 Legion goes to the Negev desert in Israel and creates a giant black dome. The local troops and armed forces attempt to enter the dome but are either destroyed or find themselves unable to penetrate it. The X-Men are called to the site and Storm, Bishop, Iceman, Jean Grey and Psylocke attempt to enter it using the Blackbird. They manage to get inside the dome, but Legion makes the blackbird disappear. He tells them that he is going to go back in time and fix things. The X-Men try to stop him, but Legion creates a portal to the past, and all of the X-Men apart from Jean Grey get taken with him. Before she passes out, Jean contacts Professor Xavier. The rest of the X-Men arrive in Israel, and after getting Jean medical attention, they are informed of Legion’s plan by Jean. Unfortunately, they have no idea where / when in the past their teammates were transported. Lilandra Neramani contacts the X-Men with a warning directly from the Watchers and Jahf, the guardian of the M'Kraan Crystal, about the imminent end of existence.

In the past the time-displaced X-Men have lost their memory and are trying to figure out what they are there for. Legion is having the same problem, and has been taken to the hospital where both Charles Xavier and Eric Magnus Lehnsherr work. Soon, Legion's powers are revealed, as a psychic backlash occurs when he and Lehnsherr touch. Xavier and Magnus both show great interest in the mutant patient, and over the weeks, they treat him in their hospital. However, one day while they are away, Legion seduces his own to-be-mother, Gabrielle Haller. Charles Xavier receives her cries of agony and both he and Magnus rush to the hospital.

Meanwhile, in the present Cable, Jean Grey and Professor Xavier use Shi’Ar technologically to amplify their powers in order to send a message to their teammates through time. For a short instant, Cable can maintain contact with Bishop and remind him of their mission.

At the hospital a fight erupts between Lehnsherr and Legion. The four X-Men, remembering what Legion is about to do, enter the battle and Charles is amazed to meet his future students. Although the X-Men do all they can, they are defeated by the powerful Legion. Fulfilling the task he set for himself, Legion creates a lethal psi-blast and fires it at Magnus, but at the last moment, Xavier jumps in front of Magnus to save the life of his friend. With his would-be-father killed, Legion too then ceases to be. The X-Men also vanish, as they couldn't have followed a non-existent Legion to the past. Only Bishop remains, as he is a time anomaly himself. Meanwhile, the fight was broadcast on the news and Apocalypse observed it. After stating his Darwinist views on life, he comments that mutantkind finally rises, although somewhat earlier than expected.

The other X-Men in the present realize that their teammates have failed as a crystalline wave washes through the universe erasing everything in it's wake. They spend their final moments with loved ones, until the wave finally hits the earth. Everything transforms into crystal structures and shatters.