Ever since Professor Xavier was shot and killed by Bishop at the end of Messiah Complex, he has been trying to make amends for what he has done wrong in the past. One of those transgressions revolved around Logan. Xavier knew Logan was sent to join the X-Men to kill him but he let him join anyway, wiping his mind clean in the process and making him his own personal weapon. Realizing that his son, Daken, is going down the wrong path, Logan asks Xavier to repeat what he did all those years ago. Only this time, his target will be Daken. However, Xavier and Logan aren’t the only ones interested in Daken. So are Sebastian Shaw and Miss Sinister, who are very interested in turning Daken into their own personal assassin... 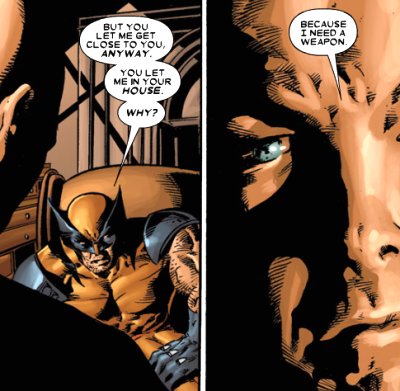 Years ago, Wolverine was a member of Canada’s Project H, though he wasn’t there solely on his own volition. Actually under the orders of the enigmatic Romulus, one of Wolverine’s assignments was to impress the man named “X”. To do so, Wolverine was thrust into battle between the incredible Hulk and the Wendigo. As predicted, post-battle Wolverine was contacted by the mysterious “X” – Professor Charles Xavier – who invited him to join his X-Men. Once in the X-Mansion, Wolverine attempted to kill Xavier, per Romulus’ orders. However, Xavier had been aware of Romulus’ programming all along and was able to use his powers to free Wolverine from Romulus’ influence. Asked by the now-freed Wolverine why he had let him get close to him, knowing the danger, Xavier explained that he needed a weapon.

In San Francisco of the present, Logan takes Daken to Chinatown and leaves him in the care of a Tibetan monk for safekeeping, while Logan returns to the X-mansion to request telepathic help from Emma Frost in order to help heal Daken’s shattered psyche. After Logan leaves, the monk takes Daken to a monastery where he is kept in sparse conditions. Shortly thereafter, Daken is telepathically contacted by Miss Sinister, who attempts to persuade him to go with her. When he refuses, Miss Sinister returns later with a fleet of helicopters and proceeds to destroy the monastery and takes Daken with her down to Panama.

Meanwhile, Logan has returned to the X-headquarters, where he runs into Scott Summers and Emma Frost. There, he learns via scent that Xavier is still alive and is perturbed that he hasn’t been told. Logan angrily leaves and, in time, runs into Xavier at an outside restaurant. When Xavier learns Logan wants him to erase Daken’s mind, Xavier refuses. Still, Logan presses, letting Xavier know he remembers that Xavier did it to him years ago on the first day Logan walked in the door of the X-Men, though Xavier had known all along Logan had been sent there to kill him.

In Panama, Miss Sinister (going by the name Claudine Renko) introduces Daken to her friend, Sebastian Shaw. Together, they promise to assist Daken with his current case of amnesia, in return for a favor. 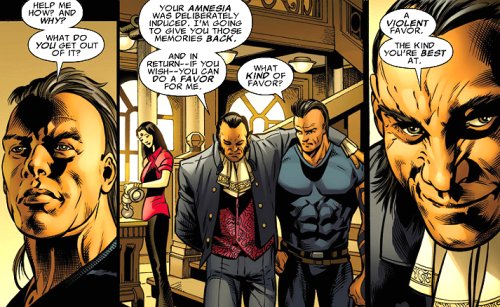 With Daken’s consent, Claudine attempts to enter Daken’s mind but is unsuccessful, due to an implanted psychic trap. When she tells Shaw of her failed efforts, Shaw knows that it has something to do with Romulus and is concerned. As he ponders the situation further, Claudine visits Daken in his room and they share a kiss. Once Claudine meets up with Shaw again, Shaw informs her of his plan. They will get Xavier to enter Daken’s mind first to bypass its defenses and Claudine can follow, overwriting his memories as they see fit.

Meanwhile, Logan sneaks into the Hellfire Club in New York and discovers the Inner Circle’s plan to take on Shaw. Before long, his cover is blown and he comes face to face with three members of the Inner Circle of the Hellfire Club, who accuse him of being an assassin for Shaw himself. Systematically, Logan kills Turner Scholl and then turns his attention on Castlemere. Fearing for her life, Mercedes blasts them both, killing Castlemere and escaping with her life. 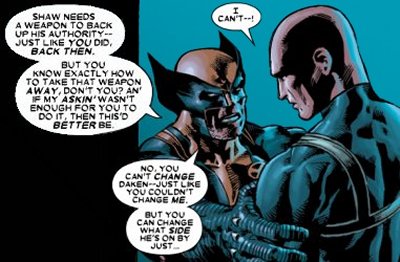 When he comes to, Logan heads back to Professor Charles Xavier’s position at a nearby cemetery where they discuss what occurred. At first Xavier is disgusted with Logan until Logan reminds him that Xavier had once described Logan as a weapon, one for which Xavier had use. Just then, they are ambushed by Shaw’s gunmen, though Logan kills them all. However, before the last of them dies, Xavier reads his mind and learns of Shaw’s plan: to become Lord Imperial of the Hellfire Club. Immediately, Logan knows how Daken plays into it – he will be Shaw’s weapon. Logan then insists to Xavier that he needs to do what he did to him years ago and reprogram his son’s mind.

In Panama, Miss Sinister prepares Daken for her and Shaw’s plan, knocking him out with a mental blast. As expected, Wolverine and Charles Xavier to infiltrate the compound that night, almost immediately running into Shaw. While Shaw and Wolverine tangle, Xavier makes his way in to find Daken but runs into Claudine. Xavier easily wins their resulting psychic battle but is shocked to learn of her connection to Mister Sinister. 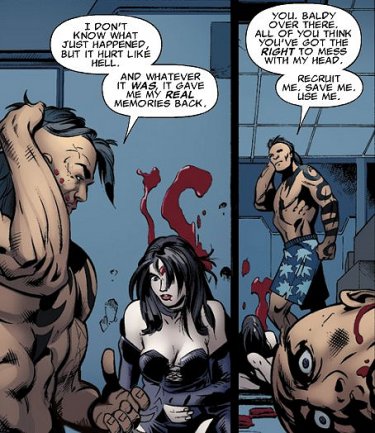 Xavier soon finds the unconscious Daken and enters his mind, immediately seeing a ton of psychic scar tissue, far more than had been in Wolverine’s mind. Xavier then encounters the psychic trap, causing a backlash and knocking him out. This done, Miss Sinister enters the room, just as Daken regains consciousness, and tries to complete her plan, implementing memories in his mind. However, it goes awry when Daken stabs her in the gut and moves on to do the same to Xavier.

Before he can, Wolverine arrives, having bested Shaw, and tells him that they both know that ain’t gonna happen.

Daken immediately attacks but Wolverine refuses to fight his own son, even though he is being beaten to a pulp. During the beating, Logan went to the one place in his mind where he had peace – Jasmine Falls in Japan with Itsu. There, he also finds Charles Xavier, who tells him what actually happened to Itsu and Daken when he was a baby. Unknown to Wolverine, Xavier shares the memory with Daken, who now knows that Logan did not kill his mother. The reason for their animosity gone, Wolverine offers Daken the one thing he can give him – revenge. When Xavier warns him of going down that path again with his son, Wolverine tells him that they are going to stop Romulus. Leaving, Wolverine tells Xavier that he forgives him and that he hopes one day Xavier can do the same for him.