For years, the mysterious individual known as Romulus has controlled Logan’s life at every turn. Years ago, Logan’s bride-to-be, Itsu, was killed by the Winter Soldier acting on orders given by Romulus. After she died, Logan’s unborn son, Daken, was taken from Itsu and adopted by a young Japanese couple. It didn’t take long before Romulus stuck his claws into Daken’s life and turned him into an assassin. Romulus also had a hand in the lives of others – Sabretooth, Cyber, Omega Red, Nuke and Wild Child. With all of them now dead, the heir to Romulus’ throne is up for grabs. Daken wants it and Wolverine

Prelude
Planning for his ultimate confrontation with Romulus, Wolverine enlisted the aid of a few others:

In San Francisco, Wolverine convinces Daken to help him track down Romulus, though in truth Daken agrees to help only to further his own cause. A week later in Paris, Daken is approached by Romulus and informs him of Wolverine’s plans. 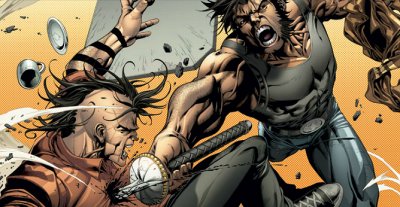 The next week, Daken meets Wolverine outside a café in Ankara, Turkey where Daken tells Wolverine that he has met with Romulus and that he knows his plan because he told him it. Surprisingly,Wolverine reveals that he knew Daken would rat him out to Romulus but that was all part of his plan. Ruby Thursday already told Romulus the plan but it needed to be corroborated. When Daken then asks if there’s anything else he doesn’t know, Wolverine tells him it’s a surprise and proceeds to stab Daken in the chest with the Muramasa blade.

Romulus is immediately informed via an onsite agent, who witnessed the stabbing and reports the arrival of the ambulance to take Daken away. The agent follows the ambulance on Romulus’ orders but dies when a van, presumably driven by another agent of Romulus, sideswipes the first agent’s. The resulting crash attracts the attention of the ambulance, which turns around to assist, thus providing Romulus the chance in the confusion to come out of hiding to check on Daken personally. However, in a twist of expectations, Skaar, the son of Hulk, bursts from the ambulance and confronts Romulus. Though Romulus had approached him in Iceland six days before to offer an alliance, Skaar has decided to accept a different deal from Wolverine.

Though seemingly cornered, Romulus’ shows his ability to plan for contingencies, when help arrives in the form of hired Kurdish mercenaries, who open fire with rocket launchers at Skaar. Watching from a nearby rooftop with his ally Cloak, Wolverine realizes Romulus plans to create carnage in the street to lure Wolverine out into the open. Refusing to allow civilians to be hurt, Wolverine orders Cloak to contain Skaar, while he confronts Romulus. However, when one of the mercenaries detonates an explosive vest, Wolverine decides to assist civilians, rather than going after Romulus. 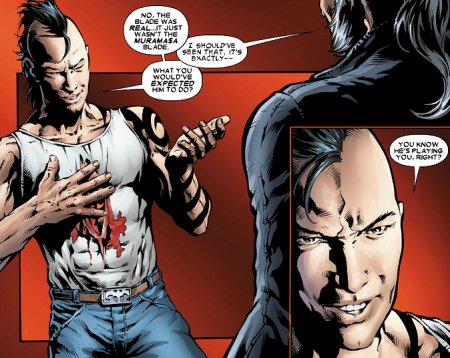 Before Romulus can escape, however, he is halted by Daken, who reveals that, though he was indeed stabbed, it was not by the Muramasa blade. He also informs Romulus that Wolverine’s plan is to expose Romulus’ very existence to the public, thus removing the shroud of fear upon which Romulus’ empire is built. When Romulus points out that this will mean there will be nothing for him to inherit, Daken replies that that is why he is joining Romulus and then turns to fight side-by-side with Romulus against Wolverine and Skaar. 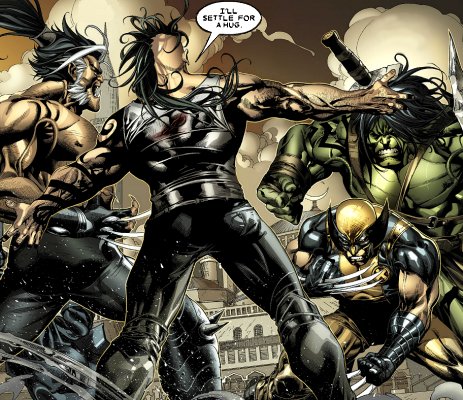 In the ensuing battle, Wolverine and Daken are pretty evenly matched but Romulus manages to gain the upper hand on Skaar. Eventually, Romulus knocks Skaar away and into the Turkish armed forces, who have arrived on the scene believing the battle to be another Kurdish terrorist attack. Skaar attempts to warn them off but the Turkish forces open fire, infuriating Skaar, who fights back.

Meanwhile, Cloak has realized that the operation has failed and teleports Wolverine away from his stalemate with Daken. Wolverine curses that Daken and Romulus are now gone but Cloak chastises 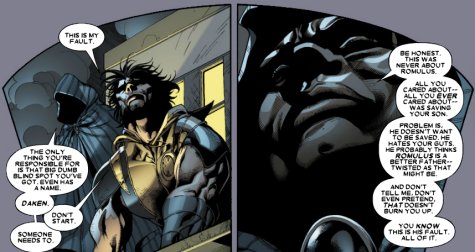 Wolverine that he now knows that the plan was never about Romulus and that all Wolverine cared about was saving his son. However, that isn’t happening, as Daken doesn’t want to be saved and Wolverine has other responsibilities. He needs to put aside his feelings for Daken… or else they’re all screwed.

The next day, in a hotel in Damascus, Romulus and Daken seem to have solidified an alliance. Romulus tells Daken about his long history, starting with his existence from humanity’s early days, to his constant rebirth over the millennia and eventual founding of his empire from the shadows. However, just as Romulus seemed to be most comfortable, Daken strikes, eviscerating Romulus with his third blade, constructed from the metal of the Muramasa blade.

With Romulus at his mercy, his powerful healing factor eliminated by the properties of the Muramasa blade, Daken berates him for never being serious about choosing Daken as his successor, always intending Wolverine to take the throne. Now, Daken just wants Romulus dead. However, as Daken goes to deliver the killing blow, Romulus is teleported away. Realizing that it was Wolverine’s doing, Daken yells his name in rage.

Teleported to the long abandoned Howlett estate Alberta Canada by Cloak, the captive Romulus is informed by Wolverine that he won’t be killed. Instead, Wolverine imprisons Romulus in the darkforce dimension within Cloak’s cloak. Afterward, Cloak agrees to keep Romulus within for as long as it takes and to tell no one. Ever. 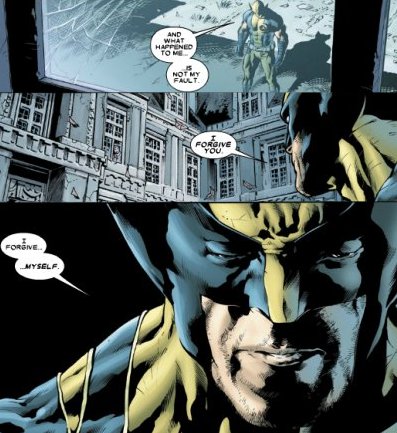 This done, Wolverine takes a moment to enter the estate and, in the shadow of the place where he was born, take stock of how revenge has been the only constant in his life over the last century. However, having learned from Romulus, he realizes revenge isn’t going to get him what he needs, but forgiveness will. Forgiveness for those who wronged him, as well as forgiveness for himself.

Later, Wolverine returns to the Howlett estate and buries a re-forged Muramasa blade along with Daken's adamantium claws.