After a while of living on the island of Utopia, cracks start to appear between Cyclops and Wolverine over the direction the X-Men are headed in. The situation is exasperated when Kid Omega causes an international incident, to which the countries of the world responded by restarting their Sentinel programs. With the X-Men’s home under threat, Cyclops’ decisions to use the X-students as soldiers doesn’t go down well with Wolverine, bringing to a head the conflict brewing between the two men.

[Note: A series called Prelude to Schism was released just before this crossover. The four-issue series didn’t tie-in directly to the series. Instead, it concentrated on showcasing the current mindsets of Magneto, Cyclops, Wolverine and Xavier (who had recently revealed to the X-Men he was still alive). In it, an unseen threat is headed to the island and Cyclops is deliberating whether to evacuate Utopia or stand against it. Each issue is narrated by one of the four characters and their histories are briefly explained, as well as their stance on Cyclops’ reign on Utopia. Whilst it seems the series should fit within the Schism event, a number of glaring continuity errors stand out, such as the characters statuses during the main event compared to this mini-series.]

Cyclops and Wolverine head to the UN, where Cyclops delivers a speech asking for the countries of the world to decommission their Sentinel programs once and for all. As if on cue, Kid Omega 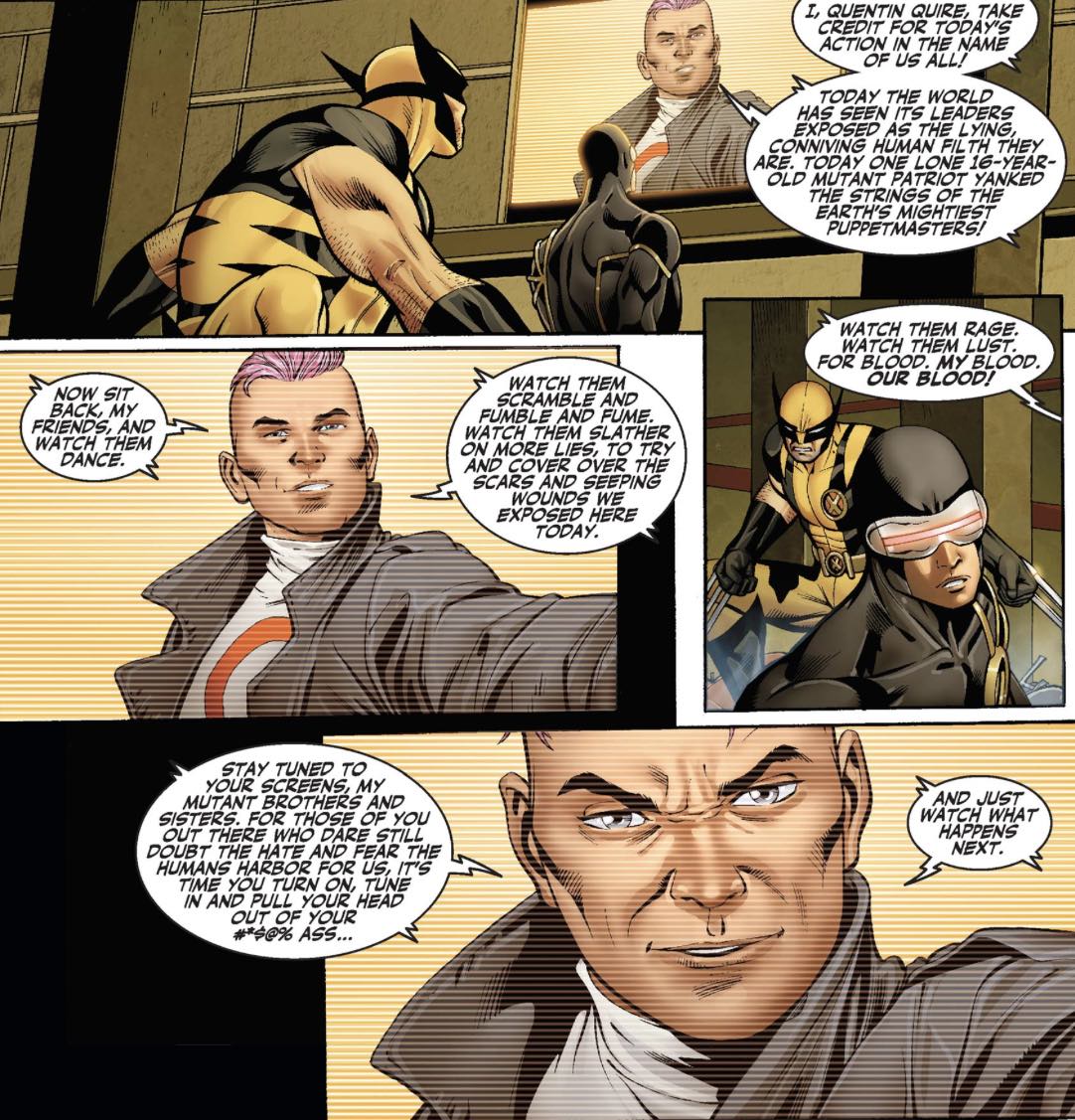 bursts in to the building and telepathically coerces all the politicians there to reveals their deepest, darkest secrets to the world. The two X-Men try to make their escape as the crowds in the building turn on them, but they are stopped by a group of Sentinels outside. They dispatch the robots but the damage is done and they head back to Utopia. Only hours later, they watch the TV as news reports show various countries around the world restarting their Sentinel programs as a show of force against the perceived mutant threat.

A number of Sentinels around the world begin malfunctioning due to their age, and the X-Men are kept busy trying to stop them from hurting humans and mutants alike. Wolverine starts to become increasingly annoyed at Cyclops, as he is forced to stay on Utopia as back-up in case it’s attacked. To make matters worse, he grows concerned about Oya, one of the newer students. She has only known pain and suffering since she became a mutant, but her religious upbringing

causes her to see herself as a monster not worth saving. As Wolverine and Cyclops argue, Kid Omega strolls into the X-Men’s situation room, requesting sanctuary on Utopia. Wolverine wants to hand him over to Captain America, but Cyclops wants to keep his trial and punishment a mutant affair.

After demonstrating his competence to some of the remaining Hellfire Club members, Kade requests a great deal of money and resources so he can begin the next stage of his attack on the X-Men. Having some of his associates meet with a group of alien smugglers, he acquires some weapons to be used against the mutants.

With tensions over the mutant threat running high, Cyclops seizes upon the opportunity to show the X-Men in a different light when a local museum opens up its mutant exhibit. The opening night starts off well, with a number of high-profile X-Men and students attending the event. Things quickly go downhill when Kade Kilgore and his fellow Hellfire Club members storm the building, looking to cause trouble. Despite the X-Men putting up a good fight, they are all subdued by the technology and weapons Kade had acquired from the aliens. On Utopia, Cyclops dons a jetpack and flies towards the museum, whilst Wolverine also races across San Francisco in the hopes of beating him there.

One of the only mutants not captured is Oya, who had been looking around the exhibits in an attempt to understand her mutant nature. Hiding from the Hellfire Club, she knows its only a matter of time before she is found and she radios the X-Men for help. After she spots a bomb in the building, Wolverine yells for Oya to get out of there but Cyclops tells her to do what she feels she has to. 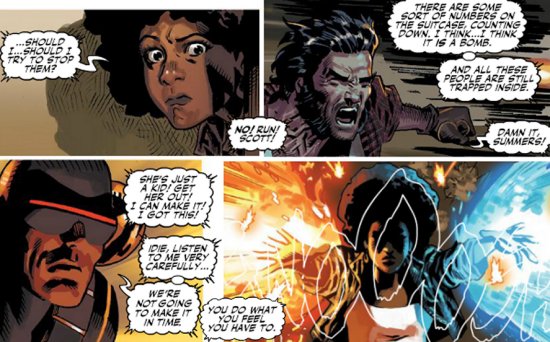 Wolverine begs for her to wait but she steps out from her hiding place and uses her elemental powers on the Hellfire Club. Killing a number of them, she manages to escape the building before the bomb explodes. Wolverine and Cyclops meet her outside, and the two get into an argument over what she did. A secondary device explodes, only this one starts to pull in metal and reform it into a Sentinel.

Cyclops takes Oya back to Utopia, whilst Wolverine and Maddison Jeffries fights the new Sentinel. After realizing it’s much stronger than the usual versions, they inform Cyclops that it’s headed towards Utopia. With all the senior X-Men across the world dealing with the other Sentinels, Cyclops has to rely on the students to deal with the one headed to the island. Wolverine makes it to Utopia and immediately gets into another argument over the ethics of using 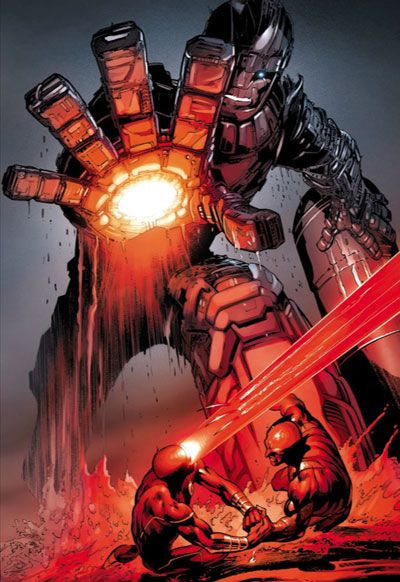 children as soldiers. With neither side backing down, Wolverine storms off, leaving Cyclops to rally the students together. As the Sentinels nears Utopia, Wolverine reappears, informing Cyclops that he’s armed plastic explosives all around the island and he’s ready to detonate it. The argument becomes heated between the two until it becomes violent, with both men ignoring the Sentinel threat so that they can fight each other.

The students start arguing amongst themselves too, with many of them turning on Hope. It’s only when some of the older students arrive that they calm down and listen to Pixie, who gets them to understand what being an X-Man means. They decide to stay on Utopia and fight the Sentinel, which has almost reached the shore. Cyclops and Wolverine continue to fight, not noticing the giant robot upon them until it’s too late. They narrowly avoid being squashed, thanks to the students, who arrive just in time to take it on themselves. Thanks to the combined efforts of the X-Men and the students, the Sentinel is defeated and the Hellfire Club’s plan is thwarted.

As Cyclops surveys the damage, he is approached by Wolverine, who tells him that he’s had enough of following him. He doesn’t agree with the way he is leading the X-Men and his willingness to throw the students into the line of fire. With that, he declares he is leaving Utopia and setting up a new school back in Westchester. Both he and Cyclops approach all the X-Men to try and convince the various members to stand by them. Many of the students and X-Men follow Wolverine to Westchester, whilst a number remain on Utopia. Despite not killing the X-Men, the Hellfire Club declares their plan a success and look forward to their next move.