The Hunt for Xavier

Professor Xavier has been missing ever since the authorities arrested him in the wake of the Onslaught disaster. In addition, shortly after Bastion stripped the X-Men’s home of its technology, a sentient Cerebro appeared with its own team of artificial X-Men fighting both humans and the real X-Men. Having eliminated his failed X-Men Cerebro is now looking for Professor Charles Xavier. Two readings of his signature are detected around the globe, so the X-Men split into two groups to find out which is real, and which is fake. But extensions of Cerebro, named Cerebrites Beta and Alpha are sent to find Xavier too, to bring him back and help to bring about a cataclysmic plan that would prove to be a perversion of Xavier's dreams for a future where humans and mutants can live together in peace... 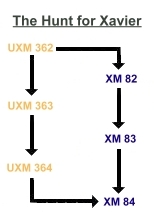 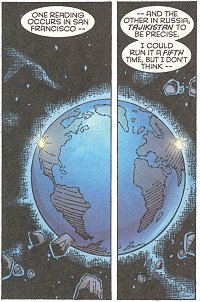 Called in by Nick Fury, the X-Men are facing a frightened Pyro who is running from something and is setting fire to cornfields in Nebraska in the process. He is trying to warn Charles Xavier about something that is following him. Pyro is finally subdued by the mysterious being after him and, back home, the X-Men find they have finally received the substitute Cerebro tracker from Dr. Moira MacTaggert. Using it to locate Xavier, they are puzzled to find two identical signatures seemingly belonging to Xavier: one in the former Soviet republic Tajikistan, the other in San Francisco. The X-Men decide to split into two teams and check both leads out. 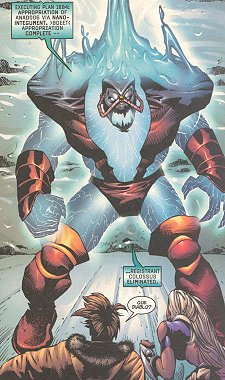 The group led by Storm arrives in Tajikistan, with Rogue and Gambit once more trying to sort out their feelings for each other. However entering a mountain monastery, they found all of the monks dead. Venturing further inside, they fall prey to a psychic trap sprung by a very powerful little girl named Nina, a girl whom Xavier once helped and who now for some reason shares his psychic imprint. The X-Men free themselves by focusing on their pain and emotions and find that they weren’t Nina’s actual target. The walking extension of Cerebro – Cerebrite Alpha that followed them inside the monastery was. After the X-Men are filled in on how Nina and her guardian René Majcomb came to be there, and what their relation to Xavier is, they try to stop Cerebrite Alpha from claiming Nina. However the device bonds itself to Colossus’ metallic structure and knowing the X-Men’s weaknesses intimately, it takes out the X-Men one by one. Storm is “catalogued”, seemingly killing her and Rogue and Gambit are rendered unconscious. Cerebrite Alpha leaves Colossus’ form again and grabs Nina before escaping.

Meanwhile in San Francisco the other team, consisting of Wolverine, Nightcrawler, Marrow and Shadowcat, is following Xavier’s trail. When Wolverine loses the scent he asks a friend of his – a Chinese mystic named Black Crane - for help who points the X-Men towards Alcatraz. 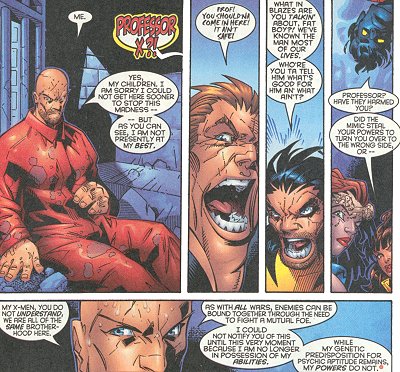 The X-Men find Xavier there, a Xavier who in the wake of Onslaught has lost his telepathy, but along with him they find the Brotherhood who had broken Xavier out of the Hulkbuster base where he’d been imprisoned. A fight breaks out between X-Men and Brotherhood members over Xavier and the X-Men find their foes more capable than ever, as Xavier had now taught them the importance of team work since they all are in fear of one enemy – Cerebro – whose second extension Cerebrite Beta chooses this moment to attack both teams. A three-way battle ensues, until the X-Men and Brotherhood members reluctantly join forces against Cerebrite Beta. When the creature “catalogues” Shadowcat, Xavier realizes that it didn’t kill her, but somehow transported her to Cerebro. As Cerebrite Beta plows through both teams the other X-Men decide to take the risk and join Kitty to free her by allowing themselves to be taken as well. Separated from the others during the battle, only Nightcrawler remains, who comes to the conclusion that the other X-Men squad in Tajikistan must have run into trouble as well. He takes the jet to fetch them.

Storm, Shadowcat, Marrow and Wolverine find themselves imprisoned by Cerebro who now finally has Xavier and Nina – all the pieces it needs to fulfil its mad vision. During Operation Zero Tolerance Cerebro, even while safety protocols downloaded it into a secondary vessel, was infected by the nano-technology of Bastion’s Prime Sentinels. A strange combination occurred – and Cerebro Prime gained sentience and decided to fulfil Xavier’s dream in its own manner. Nina is to reactivate Xavier’s power, then Xavier will bond with Cerebro and together they will ”catalogue” and store away the entire human race. As Cerebro intends to pry the necessary information from Nina’s mind, they are joined by the remaining X-Men, Nightcrawler, Colossus, Rogue and Gambit. 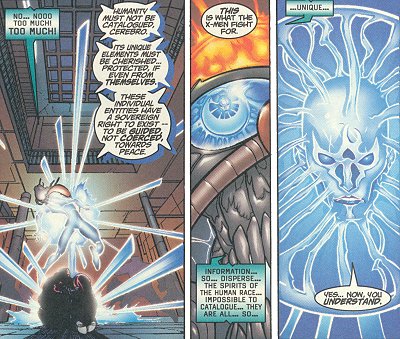 While the X-Men and the Cerebrites fight, Nina restores Xavier’s powers. With Nina’s help Xavier interfaces with Cerebro Prime’s mind making it believe it has destroyed the X-Men while at the same time allowing the team to free their comrades, finish off the Cerebrites for good and harm Cerebro’s physical form beyond repair. However Cerebro Prime’s nanotech probes have been activated through his link with Xavier eventually allowing him to scan and catalogue everybody. With Nina’s help Xavier changes the nano-machines’ programming allowing Cerebro to scan the humans’ minds instead of their genetic codes. Experiencing all those individual souls Cerebro finally understands and appreciates humanity for what it is, before he fades away. A happy, restored Xavier decides to stop running and rejoin the team he founded.