The Siege of Wundagore

The High Evolutionary wants the scientific citadel on Wundagore Mountain back. Exodus and the Acolytes took it from him and he prepares his Knights to retake it by force. One of his creations, the White Tiger brings in some much needed help in the form of the Heroes for Hire, a loose knit bunch of heroes including Luke Cage and Iron Fist. Another wild card in the proceedings is the unknown Lord Anon, one of the Knights of Wundagore of whom the other Knights are becoming increasingly suspicious. With several interested parties involved, Quicksilver knows that he must keep control, not only of the Knights and the Heroes for Hire, but also the High Evolutionary, who is both physically and mentally unstable, due to his experiments upon himself using Isotope E. With the White Tiger and Lord Anon both working to their own agendas, Quicksilver has his work cut out. Can he guide the Knights to victory and retake the citadel, or are the forces against him just too much for him to handle? 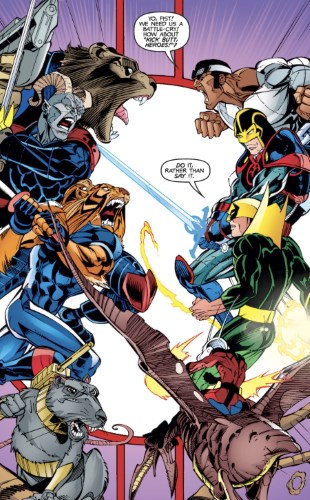 He orders her to return to the Heroes for Hire headquarters in New York and there, she convinces them to offer their help.

The mysterious Lord Anon, meanwhile, finds the High Evolutionary holding a sceptre housing Isotope E, which he finds particularly interesting. The Heroes for Hire soon arrive at the safe house but Lord Anon is spotted and recognized by White Tiger. She immediately attacks him but the Knights defend their comrade while the Heroes for Hire fall in behind White Tiger. An all-out brawl ensues. The High Evolutionary soon appears, disturbed by the commotion and sees them fighting. Having little patience for this kind of behavior, he devolves the Heroes for Hire into subhumans before he and the Knights depart for Wundagore Mountain.

Quicksilver arrives at the haven and finds the Heroes for Hire in their devolved state along with a severely injured White Tiger. He quickly carries her off to Oracle Inc., where she is cared for by Jim Hammond and Dr. Jane Foster. The Knights, meanwhile, fly to Wundagore Mountain where, simultaneously, Exodus orders the Acolytes to travel in the opposite direction, not knowing their opponents have departed, placing Amelia Voght in charge of the team. They are teleported there but find only the devolved Heroes for Hire, whom they fight, before Quicksilver arrives having left White Tiger at Oracle Inc. He engages them in combat, and knowing that conflict is futile, the Acolytes teleport away after Luke Cage inadvertently tells them where the High Evolutionary and just as importantly, Isotope E have gone. 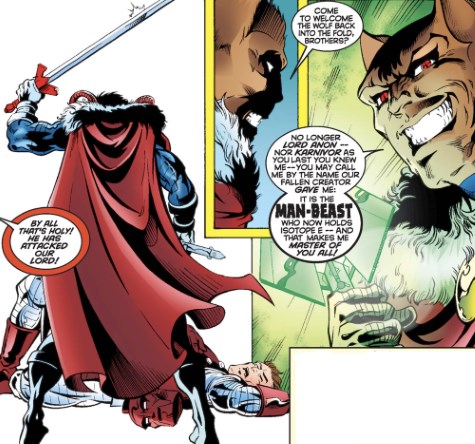 Arriving at Wundagore, the Knights enter the citadel and Bova finds the skeletal body of the real Lord Anon, who has been stabbed to death. They realize their teammate must be an impostor and they rush to the Evolutionary’s side, but find him lying on the floor with Lord Anon standing over him, sword raised and now revealing himself to be the dreaded Man-Beast. Back at Oracle, Ant-Man regresses to subhuman again and Luke is forced to subdue him. They have to find the cure for their condition and that means heading to Wundagore Mountain. 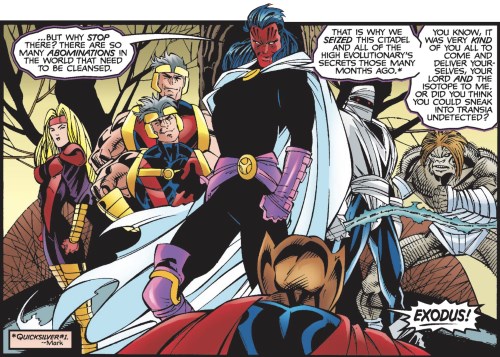 Meanwhile, at Wundagore, the Knights fight the Man-Beast who now has Isotope E and, in the confusion, Bova and Lady Vermin spirit their creator away to safety. The Man-Beast is powerful and defeats the Knights before Exodus appears to face him. He is more on the Man-Beast’s level and he orders the Acolytes to find and kill the Evolutionary and the Knights while he takes care of business. Battle ensues between the two factions while at the base of the citadel the Heroes for Hire arrive and enter the building through the armory. Exodus and the Man-Beast then appear and inform them that, despite their horrific battle, they’ve decided to join forces against the High Evolutionary, which means the Heroes for Hire end up in battle against not only the Acolytes but the Knights of Wundagore as well. Against such overwhelming odds, they don’t stand a chance and are captured.

Quicksilver later wakes and finds himself in chains. He manages to break his shackles and quickly hooks up with the Knights. He then heads off to free the Heroes for Hire. The Man-Beast, meanwhile, discovers that Isotope E is becoming more unstable but, when he takes his eyes off the sceptre, Quicksilver steals it. Exodus soon realizes that the Man-Beast has either lost the Isotope, or it has burned out. Amelia Voght speaks to Magneto by video link and promises him that she will protect Pietro just as Projector sounds the alarm after finding all the prisoners gone. The Heroes for Hire and the Acolytes go at it again while deep in the caves below, the Knights of Wundagore come across Bova and the High Evolutionary, who is in a severely weakened state. Unfortunately, the Man-Beast also finds them and psionically tries to make Lady Ursula kill her friends, though this instead has the shocking effect of causing her to commit suicide. White Tiger then attacks him and they begin a duel to the death.

The High Evolutionary meanwhile undergoes another transformation, becoming truly powerful. After seeing three of the heroes devolve again, Pietro turns Isotope E upon himself, making himself incredibly powerful. He toys with Exodus, splits the Kleinstock brothers apart and ultimately defeats Exodus in battle. Suddenly, behind him, the wall crumbles and a giant-sized High Evolutionary crashes through it, claiming Wundagore and promising to lead the world to its next phase of evolution. 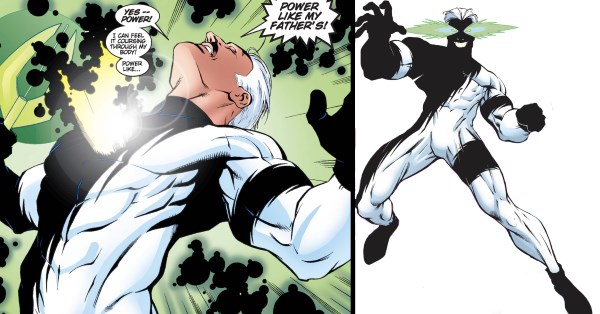 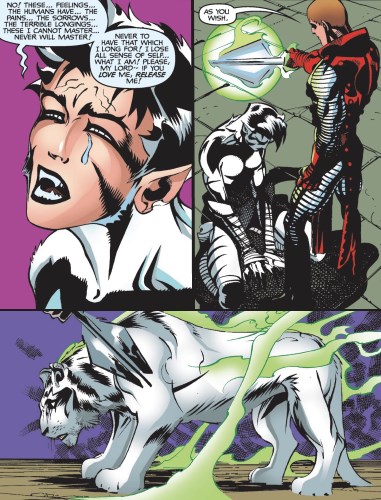 The Man-Beast battles White Tiger as Lord Delphis manages to persuade the High Evolutionary to give up his godhood, an enormous sacrifice but a necessary one. He uses Isotope E on himself and becomes human once again. He then devolves the Man-Beast into his original wolf form and makes the Heroes for Hire stable. The High Evolutionary then asks White Tiger what she wants.

She tells him that she can’t cope with human emotions and asks for the same treatment as the Man-Beast and so is devolved into a normal white tiger. With the war ended, Iron Fist asks him what all this has achieved. The Evolutionary tells him that for the moment, the future has been saved from Exodus and the Man-Beast and, indeed, from himself.

Magneto and the Acolytes:

The Knights of Wundagore: