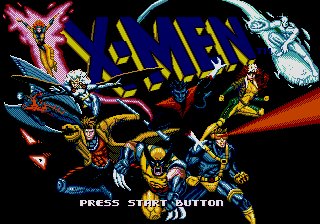 Story:
During their regular Danger Room exercises, the X-Men complete a trial of the Savage Land only to find that they are trapped in the room, with new sequences resetting themselves every few minutes. Who could be behind such deeds? The only way to find out is to guide the X-Men through several of these Danger Room simulations until they can figure out how to stop it. 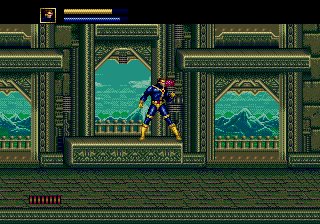 Cyclops
- By pushing the A button, Cyclops will unleash an optic blast. However, by holding the A button for an extra second and then releasing it, the blast will become more powerful.
- For Scott’s secret mutant trick, hit the C button once to jump, then again in midair to make him spin. As he is spinning, hit A, and he will fire optic blasts in all directions simultaneously. Great for when he’s surrounded by enemies.
- Cyclops is great for stages where long range attacks are needed, as unlike Gambit, he can aim his blasts in specific directions. He is excellent for use against Juggernaut in the Savage Land stage and Excalibur’s Lighthouse. However, enemies such as Zaladane and Ahab that fight with long range weapons are best left to the hand to hand X-Men. Cyclops is the best choice for defeating Magneto, as he is the smallest and can dodge Magneto’s blasts more easily and counterattack from long range.
- Additional advantage: Cyclops’ mutant power bartends to decrease far slower than the others even when using many optic blasts EXCEPT if you repeatedly use the spin blast.

Wolverine
- By pushing the A button, Wolverine will either draw or sheathe his claws. His mutant power bar depletes quickly if his claws are drawn. When his claws are sheathed, his healing factor kicks in, and he will slowly recover health on the yellow meter.
- While Logan’s claws are drawn, press C to jump, then press B to lunge forward quickly and strike the enemy. Also, while in midair, press C to do a spin slash. This depletes Wolverine’s mutant power bar quickly.
- For Logan’s secret mutant trick, you have to completely exhaust his mutant power bar and then draw his claws and perform the spin slash. This will result in berserker rage, with Logan slashing every which way and cutting everything in sight, including himself. This costs Wolverine a good chunk of his health bar, up to 1/3 each time you do it.
- Logan is a fantastic choice to defeat Ahab, Zaladane, or Mojo. It’s pretty straightforward with Zaladane and Ahab, just slash with the claws whenever they appear. With Mojo, you have to jump over him to his mechanical backside, then slash the mechanism at the back and run away immediately after. Mojo seems to be allergic to slashing, and will die after 3 or 4 good swipes.
- Do not use Logan against Juggernaut or Apocalypse. You’ll just get hurt. 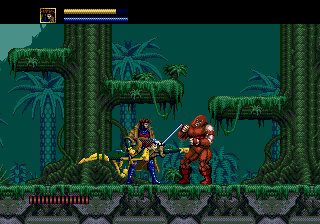 Gambit
- By pushing the A button, Gambit will quickly charge a playing card with kinetic energy and throw it forward. The card will not travel in a straight line, but will flutter about in midair for a few seconds or until it hits something. Holding the A button for a second before releasing it will result in the card traveling further and fluttering longer.
- Gambit cannot aim the direction of his cards very well, only left and right.
- The best way to use Gambit is to do the spin jump technique by pressing C twice and then B while he is spinning. This causes a very powerful staff attack, comparable to Wolverine’s claws.
- Gambit is a bad choice for most levels, as unlike the other mutants, he has his staff which sticks up upon crouching. If an enemy hits the staff, it costs Gambit life. On top of that, his mutant power is unreliable at best.
- If you master the spin jump technique, Gambit will get you through the Savage Land, the Shi’Ar ship, and Excalibur’s lighthouse at blinding speeds. Just be sure to switch to someone useful once you arrive at the boss. He is effective against Apocalypse and Juggernaut, but not as much as Cyclops. 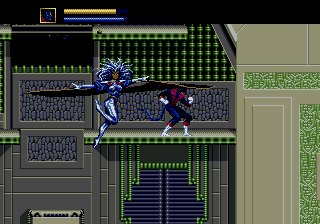 Nightcrawler
- By pushing the A button, Nightcrawler will disappear into the alternate dimension through which he teleports. While he is there, he will appear pink on screen. While holding A, hold any direction on the directional pad and release A, and Nightcrawler will teleport a considerable distance in that direction. This costs much mutant power.
- Kurt actually has two useful secret mutant tricks. First, if you walk up to any enemy until you are very close to them then tap A quickly, he will disappear and reappear quickly and the enemy will be destroyed. This does not work on bosses.
- Second, if you hold A and rotate the directional button one full turn, then continue rotating it after releasing A, Nightcrawler will teleport all over the screen, killing or damaging all enemies on screen. Again, this does not work on bosses, with the exception of Mojo.
- Kurt will actually allow you to skip most of Asteroid M once you get there. He can easily teleport through walls, allowing you to both skip large portions of level, avoiding danger, and collect power-ups without hitting switches as the others must do.
- Unfortunately, Kurt isn’t the best against bosses either. He is much more useful than Gambit, meaning that you have a fighting chance if you use him, but he isn’t as good as Cyclops or Wolverine depending on the situation. However, just like Gambit, Nightcrawler can get you through most levels at a ridiculous pace until you get to a boss. 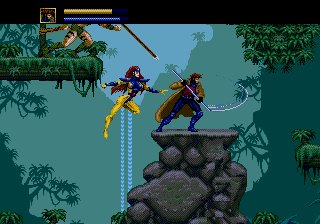 The Sega Genesis X-Men game is almost completely unique in that several other X-Men make appearances to assist you, though they are not playable. Each of them is available for one use only per level, but you may come across icons with their face on them that will allow you to use them a second time on that level. To use them, press START, highlight the one you want, and press A.

Archangel
- By selecting the blue Archangel, he will make three flying swoops across the screen, firing a volley of steel darts as he passes. This is extremely helpful in escaping near death situations, and if used at just the right time, can almost kill Deathbird.

Jean Grey
- Unlike the other supporting cast members, Jean appears automatically. When you are falling into a pit, Jean appears to pull you to safety with her telekinesis. However, sometimes she will not be able to catch you.
- You can also select Jean from the menu when you are falling, if you want to stop your descent.
- Jean can be used infinitely, though it costs you some yellow life each time she is used.

Storm
- Much like Warren, Storm is useful in near death situations. She will appear and generate a storm, hitting everything with a flash of lightning. This will kill most minor enemies, but isn’t as helpful with bosses.

Rogue
- Rogue is very useful against bosses. By selecting her, she will appear and hit the nearest enemy with a super-powered punch before flying away. This can damage some bosses by a factor of ½.

Iceman.
- Iceman isn’t a fighting character, but he is still helpful in his own special way. In some situations, it will be quite difficult to make the necessary jumps, particularly in Mojoverse. By selecting Bobby, he will zoom by and create an ice bridge across the screen from left to right, one full screen length. This prevents you from risking life over a timed jump situation. 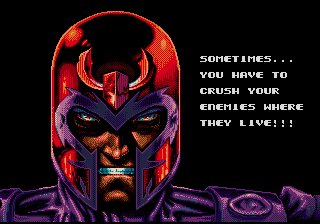 Additional Tips and Secrets:
- The golden secret for this game: You’ll notice that you are told after you defeat Excalibur’s Lighthouse that you must reset the Danger Room computer at the end of the next simulation. This next level is Mojoverse, and once you defeat Mojo, you will walk to the end of the level, where there is absolutely no turning back, and a slow countdown appears on Mojo’s TV screens. To continue the game, oddly enough, you must press the RESET button on the Genesis console. Once you do so, the screen will fill with binary code, and immediately thereafter, a few pages of an X-Men comic book will appear on the screen, detailing what has just happened over the course of the last 5 levels. Featuring cameo appearances by Forge, Psylocke, and Beast!
- Remember, once a character dies, he’s gone for good and you’ll have to start the game over again if you want to use him. If your character is running low on life, you should press START and select a different playable character for the duration of the level.
- Once you return to the Danger Room at the end of each scenario, steel orbs will appear. Here you should select the X-Man with the lowest health, as you can regain large health and mutant power bonuses by destroying these orbs. The orbs will not harm you, but they get harder to hit as the game progresses.

LEVEL SELECT:
Hold Down + A + C and power on the Genesis. With those buttons held, hold Start when the "Press Start" text appears on the opening screen. Continue to hold the buttons until the difficulty selection screen appears. Select any difficulty level and character, and walk to the right when the game play starts. Eight panels representing the eight game levels will appear on the wall. Crouch in front of a panel and press C to jump to the corresponding level. Note: This code will not work if a controller is plugged into port two.