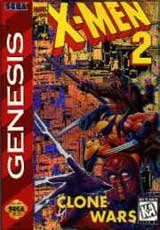 Story:
Earth is invaded by The Phalanx, a technological virus bent on world domination. Slowly but surely, the being becomes one with all the infected earthlings. The X-Men are the only obstacle for The Phalanx, being impervious to its power, and must face the clones of a number of their sworn enemies, all created by The Phalanx. Beyond that, they must face clones of themselves. Will the X-Men be able to stop this onslaught of vicious enemies?

Beast:
-Press the A button and Beast will smash the ground with both fists, causing a shockwave in both directions.
-If you charge Beast's life to full, the shockwave will shoot off in both directions.
-Beast is, physically, the most powerful character.
-Beast can cling to walls, but he can only attack and jump from that position.

Gambit:
-Press the A button to throw a card.
-The card can be aimed using the D-Pad.
-The card can be charged by holding the A Button. When fully charged, he will throw two cards.
-If Gambit's life gauge is totally full and you charge his power all the way, he will throw three cards.
-Gambit is one of three characters in the game who wields a weapon, which is his staff.

Nightcrawler:
-Press the A button to make Nightcrawler teleport.
-He can't actually go through walls with it, and it requires very good aim to make it hurt an enemy.
-When charged, Nightcrawler's teleport attack make a really bright flash and really doesn't do anything else.
-Nightcrawler can cling to and crawl across walls and ceilings.

Psylocke:
-Press the A button to make Psylocke attack with her psychic knife.
-When her life is totally full, the psychic knife gets bigger.
-The psychic knife is a one-hit kill, but only works on organic beings (discluding bosses).
-Psylocke can cling to walls, but can only jump and attack from that position.
-Psylocke is another mutant who wields a weapon, which is a sword.

Wolverine:
-Press the A button to make Wolverine jump forward and slash with his claws.
-When Wolverine's life is totally full, his jump-slash gets more powerful.
-Wolverine can cling to and climb across walls and ceilings.
-Wolverine is the ideal character for most levels.
-He's the third character to use a weapon, or weapons, which are his claws.

Magneto/Wolverine/dodge his shots so that he will break through the walls that keep you from progressing. Once you enter the final room, slash-thrust him into the vortex.

Apocalypse/Magneto/avoid the balls of energy and shoot the small blue and orange machines. After a few of these, he'll come up and try to attack. Float up in a corner and shoot at him with your punch beam.

Brain Child/Magneto, Gambit, or Cyclops/just avoid his attacks and hit him from a distance.

Deathbird/Wolverine/avoid her long-distance attacks, then strike back when she swoops down.

Cameron Hodge/Wolverine/Not much to say here. Just avoid his attacks and strike back.

the Brood Queen/Magneto/Run away from her. When you come to a wall, jump and levitate as close to it as possible. The queen will start to destroy it; once she succeeds, shoot at her now-exposed brain. Once she's defeated, her legs will continue to chase you. Run away until they stop.

the clones/pretty much anyone/they're just like the playable X-Men, but they can't use the special attacks.