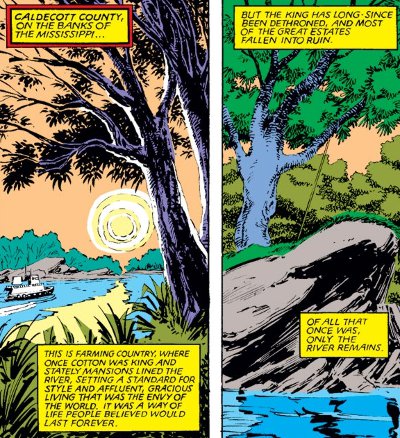 Caldecott County is a fictional county in Western Mississippi, lying on the Mississippi river. Apparently it’s a rural area with decaying antebellum plantations and small hamlets scattered throughout. Whilst the main town itself is quite small it does possess amenities like a hospital, school and even a motel.

The county does not exist in real life.

In a small wooden house in rural Caldecott two sisters named Priscilla and Carrie lived alone after their parents died. Priscilla eventually met a man named Owen and they were soon married, leaving the young Carrie to cope by herself. Priscilla and Owen set up a commune nearby where they could live off the land with others who felt like they did. After a few years Priscilla became pregnant and Carrie helped her give birth to a daughter, Anna-Marie, who would grow up to become the X-woman Rogue. 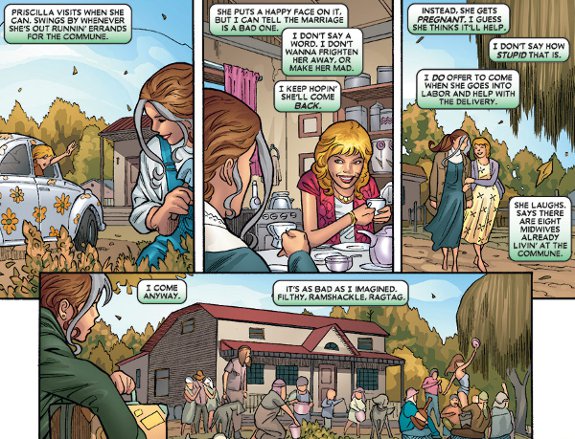 Although Priscilla rarely visited her sister she did drop by when Anna-Marie was a toddler and she told her of a mystical place she had heard of called the Far Banks. She wanted to go there as she believed it was a place where dreams would come true. Carrie disapproved of her sister’s lifestyle and the two parted ways with Priscilla and Anna-Marie going back to the commune. A few years went by and Owen managed to find a Native American shaman who could guide them to the Far Banks. Owen drugged his followers so that they would be more open to the shaman’s magic but when the mystic performed his ritual something went wrong. The paradise dreamscape they had believed in turned out to be darker then they realized and Priscilla was consumed by the forces of it. Latching on to the natural rage she held within herself she lashed out at the Owen for daring to use her the way he did. She crossed over to the dreamscape dimension and barred the way for anyone else to follow. The commune quickly dispersed after that and Owen took his confused daughter to live with Carrie. [Rogue (3rd series) #2-3]

Not getting along with her father and her aunt, Rogue ran away to live in the swamps, where she was found by a woman named Raven Darkholme, aka Mystique. Raven and her friend Irene (Destiny) offered her a room and a meal and soon adopted her. The couple made their home not very far from the river and raised young Rogue the following years. 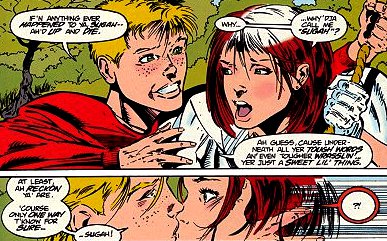 The river banks were Rogue’s playground; she often pretended to be the captain of the old paddle-wheel steamers that plied the river in the Civil War and Reconstruction periods, and she was particularly fond of an old cottonwood, cypress or oak tree with a rope tied to one branch that the local kids used as a swing. It was here that Rogue first discovered her powers when she kissed Cody Robbins. Unfortunately the boy fell into a coma and would never awaken from it again, only to die a few years after the incident.

Later on, it was also the locale in which Storm lost her powers. Actually she had followed Rogue to her native area to warn her of federal agents on her trail because of a framed murder case. Storm tried to save Rogue from their pursuers, but was hit by the blast instead. The weapon used was an newly-built untested Neutralizer that instantly banished all superpowers. Ororo fell out of the sky and nearly drowned in the Mississippi. [Uncanny X-Men (1st series) #185]

The house near the river was visited one more time for a meeting of Mystique, Graydon Creed, Rogue and Nightcrawler, which led to the shocking revelation that Mystique was Kurt’s mother. [X-Men Unlimited (1st series) #4]

Rogue soon returned to Caldecott when the X-Men were called to investigate the emergence of a new mutant in a neighboring county. She decided that since she was in the area she would visit her aunt and father, but when she got to her old home she discovered her father had run off a few years before leaving her aunt alone again. 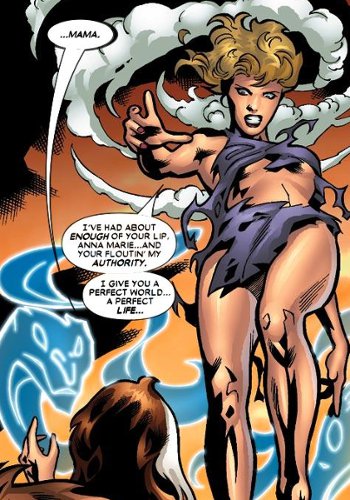 Rogue’s personal troubles took a backseat when she realized something strange was going on around town. The residents had been acting remarkably strange, with an increase in violent incidents as well as suicides for the past few weeks. Rogue began to investigate and discovered a mysterious man who was immune to her absorption touch, as well as a young woman who looked just like her and had her name. The man remained elusive but she eventually tracked him down and got some information out of him and discovered the weird goings-on were somehow linked to her mother. Gambit came looking for Rogue as he had become concerned and he managed to run into the strange girl who looked like her. Both Rogue and Gambit ended up finding their way into the dream realm of the Far Banks where they discovered the truth. Rogue's mother had gone to the Far Banks but died a short time later yet a shadow of her lived on there. She had conjured a daughter too who was the girl who looked like Rogue. The daughter had travelled over into the real world and so her mother had sent the various forces of the dream world to fetch her back. All the strange incidents that had been going on around Caldecott recently were down to the invasion from the Far Banks. Rogue managed to put a stop to the chaos being caused by her mother and in doing so found some semblance of peace about her past. [Rogue (3rd series) #1-6]

Rogue would come back to Caldecott under much grimmer circumstances when she absorbed the minds of millions of people thanks to a deadly Sh’iar weapon. Going back to the house Mystique and Destiny raised her in she tried to regain control of her mind. The X-Men were called and Emma Frost attempted to help her but she was overwhelmed by the state of Rogue’s mind. Whilst this was going on some of Rogue own squad of X-Men were revealing their true colors. When the cyborg Karima Shapandar connected to the internet at the house she was taken over by the digital villain Malice. Mystique, who had been watching over Rogue, alerted the X-Men that something strange was happening outside and Lady Mastermind, another shady X-woman, dropped her illusion to reveal the Marauders were also at the house. A fight broke out but the Marauders easily defeated the X-Men thanks to the betrayal of Lady Mastermind as well as Mystique. Hearing the commotion downstairs Rogue charged down to help but she was shot and knocked out by Mystique. Rogue adoptive mother had plans for her daughter and with her command Arclight demolished the house and buried the X-Men under the rubble. The X-Men managed to survive and after digging themselves out of the debris the Blackbird jet picked them up and they left Caldecott. [X-Men (2nd series) #200-203] 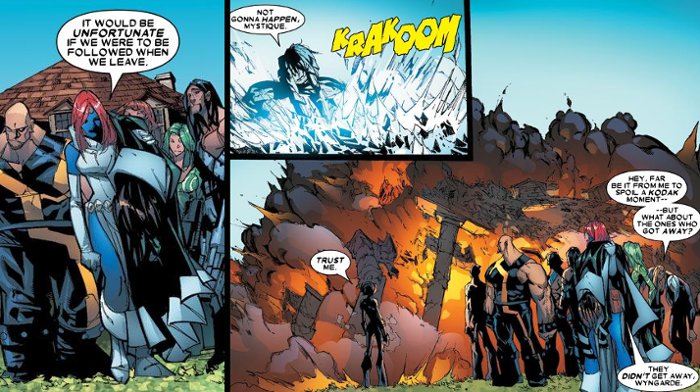