ALIEN SPECIES OF THE MOJOVERSE

The alternate dimension of the Mojoverse is a strange place, ruled over by the Spineless Ones. Whilst they are the dominant lifeform across the dimension, other species have been shown, many of which were created in Mojo’s labs.

As their name suggests, this race of creatures has no vertebrate spine, resulting in them having to crawl across the ground. Despite not having a spine, they do have heavily atrophied legs, 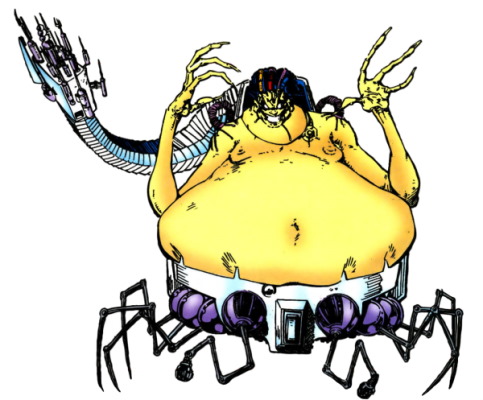 indicating that at some point in their evolutionary history they were able to walk. Due to their limited movement capabilities, they had developed to be rather large and obese, almost double the size of an average human. They are also characterized by their yellow skin, lack of hair and hands containing three fingers and a thumb.

When Arize developed an artificial spine for his race, it caused a split within the race, with some choosing to wear it and others forgoing it in favor of a mechanical chair. Those who chose to wear the spine now stood upright and had the ability to walk once more, becoming more slimline akin to the humans of Earth. Those that chose to use the mechanical chair seemed to grow more obese and used various wires and adapters to link themselves to the chair’s mechanics.

They were able to mentally receive electromagnetic signals into their brains, such as the TV signals originating from Earth. Over time, the visions they were subjected to drove many of the race insane, also causing them to perceive humans as demons. In a twist of fate, it ended up being a time-travelling Arize who sent the TV broadcasts to Mojoworld, inadvertently causing the insanity amongst his race.

In spite of the advantages that the population who chose to wear an artificial spine had, it was those that rejected it who became the rulers of the planet. Amongst these, Mojo rose up to 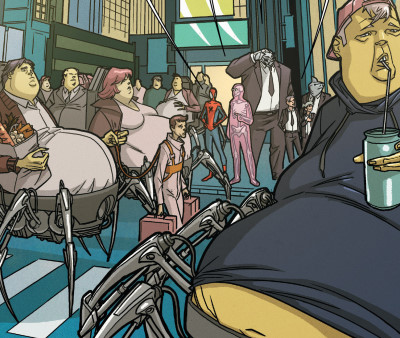 become the leader of the planet and ordered Arize to create a race of slave beings to do all the labor on the world. As slaves became more common, the Spinless Ones became lazier, often sitting in front of their TVs all day. This resulted in media-dominated society that became governed by whichever station had the highest ratings.

As they are genetically designed in a lab, the various slave races that are used across Mojoworld have been modified and re-designed many times over the years. Initially, many of the slaves were designed to look like the humans of Earth, the creatures that the Spineless Ones saw in their nightmares. Unlike humans, however, they possessed hollow bones, a spine, two hearts, leather-like skin and only three fingers and a thumb on each hand. They also had increased strength, agility and healing capabilities, which came in handy as they were forced to do most of the manual labor on Mojoworld. For reasons unknown, a few slaves, such as the rebel Quark, were given animalistic features, whilst still possessing a general humanoid body structure. 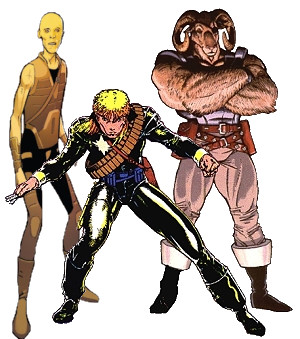 Over the years the design of the slaves has changed slightly, as many were designed to look like modified versions of the Spineless Ones.

Since Arize had been coerced into creating the slaves, he added free will and a desire to rebel into their DNA, in the hopes that they would eventually overthrow Mojo’s rule. When Shatterstar landed in the Mojoverse, Arize used his genetic template to create a special slave, Longshot, who was designed to be the leader of the slaves.

As mentioned, the slaves were used for all the work around Mojoverse that the Spineless Ones didn’t want to do. Since they could be designed to fill whatever role was needed, Mojo used many of them in his TV shows. Longshot worked as a stuntman for Mojo until Arize’s genetic manipulation kicked in and he rose up to lead the rest of the slaves in a rebellion. Mojo had his own forces and the slaves were no match, with millions being slaughtered during the fights. Longshot eventually succeeded and seemingly removed Mojo from his rule, but the tyrannical media-mogul soon returned. As the years went by, more rebellions came and went but Mojo has proved to be a permanent feature on Mojoworld… as have the slaves, sadly.

Much like the slaves, the X-Babies were artificially created in the lab for use in Mojo’s TV productions. Their inspiration came from a time when Mojo de-aged the X-Men of Earth, which created a huge ratings boost to his networks. Re-creating the concept, Mojo had the X-Babies grown from a substance called neoplasm, which allowed them to take on a human form, albeit a child-version of it. The babies’ physical designs were originally based on the X-Men of Earth, each possessing their counterpart’s superpowers, as well as a facsimile of their personality. Over time, the X-Babies’ roster would expand to include non-mutants and grow to reflect the ever-changing line-up of the real X-Men. 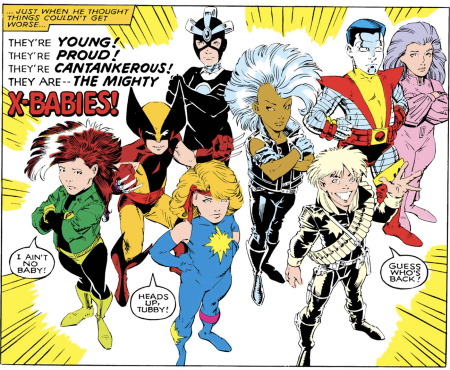 Much like the slave races of the world, the X-Babies originally belonged to Mojo and were forced to perform in his TV productions. Over time, they escaped and set up a society for themselves away from Mojo, allowing them, finally, to be free.

For a more in-depth look at the X-Babies, please click the following link to read a team entry on them: X-Babies Team Entry 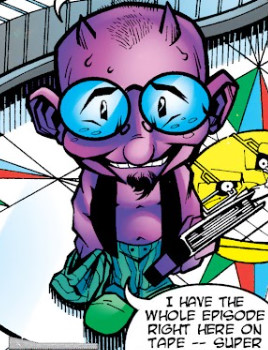 The Pix’s origins are unclear but, given their adorable nature and unique characteristics, it’s highly likely these were another of Mojo’s experiments. Looking like small, purple imps, the Pix lived in a village which comprised of enormous hollowed-out vegetables, something akin to a Saturday morning cartoon.

They offered refuge to the X-Babies, who were on the run from Mojo at the time, and in return the X-Babies acted as the Pix’s bodyguards when they were attacked.

Designed by Mojo in a lab, the Warwolves are similar in design to a dog but with metallic silver skin, red eyes and sharp claws. The original batch comprised of six warwolves, but over time more and more have been created for use by Mojo. 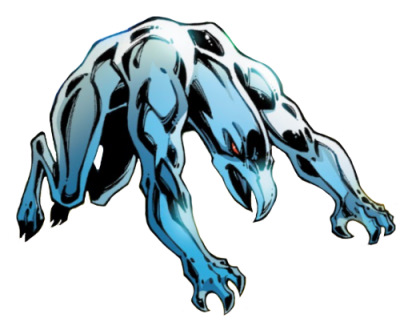 What makes the warwolves particularly horrifying is their ability to drain the life force of another being and wear its skin. The warwolves can alter their physical shape to fill the volume of the skin, making them masters of disguise.

Designing them to be excellent trackers, Mojo originally sent them after Rachel Summers after she escaped Mojoworld. Whilst some were killed by Excalibur, the rest were kept in London Zoo for a number of years. Cullen Bloodstone came into possession of them and used them on his family’s estate in a sadistic bloodsport. Whilst more of them were killed,  Rachel Summers discovered a baby warwolf and decided to care for it back on Krakoa.

For a more in-depth look at the Warwolves, please click the following link to read a separate alien races article dedicated to them: Warwolves Alien Races Entry