Existing in a separate dimension to Earth, the Mojoverse is home to the planet Mojoworld, a strange world inhabited by the Spineless Ones. As their name suggests, the race of large, yellow, slug-like creatures do not possess a spine. However, that all changed when a scientist named Arize created an artificial spine. Whilst many of the race used these spines to walk upright, a small portion led by Mojo chose to forgo the spines in favor of walking mechanical seats. For decades, the Spineless Ones’ minds were bombarded with TV signals hailing for Earth which drove the race insane, as they did not know what the images meant. Eventually, the society became media-dominated itself, to the point where the ruler of the planet was the one with the highest network ratings. Mojo rose to become the world’s leader and began a tyrannical rule that would result in the deaths of millions of people who dared oppose him. Naming the world and dimension after himself, Mojo ordered the creation of a slave race of humanoids to do all the menial labor on the world. Led by Longshot, the slave race would rebel time after time against Mojo’s rule, but the media tycoon would always keep coming back. 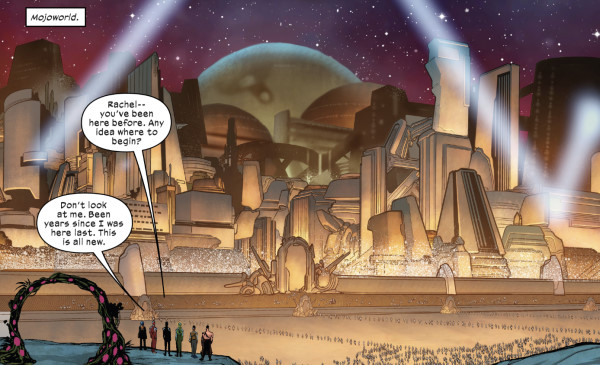 Despite the Mojoverse being an entire dimension, very few planets have been shown, with the main one being Mojoworld. Very little about this world is known before Mojo rose to power, as he made sure that he changed the planet and everything on it to his own personal brand. Mojo City appears to be the main base of operations for Mojo, having been shown to be quite technologically advanced. Elsewhere on the planet, there are forests and mountains, which are home to another species called the Pix. Arize’s secret base was located in the wilds of Mojoworld, far out the way of the tyrannical despot. 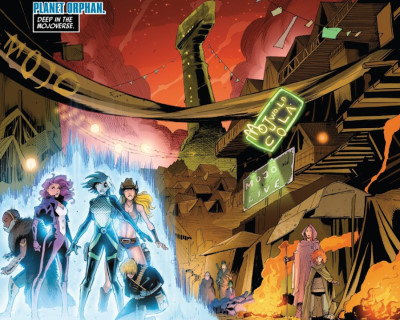 The only other known planet in the Mojoverse is the creepily-named “Orphan.” According to Longshot, the planet existed as a breeding ground for the future gladiators of Mojoworld. Much of the population live in slums, whilst the wealthiest live in luxury, with sole access to the only hospital on the planet.

Mojo’s TV studios is a sprawling, ever-changing building that comprises of his production offices as well as a wide range of TV sets. Over the years, the TV studios have been destroyed and rebuilt numerous times, with some of the studio sets being house on floating blimps. In recent years, Spiral and Arize have started their own media empire, with both setting up studios on in Mojo City.

Aside from Mojo’s media empire, Mojoworld also houses some of his darker, more sadistic side projects, such as bioengineering labs, prisons and gladiatorial arenas.

Population numbers in the Mojoverse are almost impossible to determine, with the best way being viewing figures of the various networks. During X-Factor’s journey to the Mojoverse, they monitored the top five livestreams coming from the universe and they were measured in the thousands of trillions. This method is flawed as the various networks could be broadcasting out of their dimension, but it goes to show how influential the Mojoverse broadcasts are. Regardless, the population of Mojoworld is substantial as Arize created millions of slaves for the population, many of which were killed over the course of the rebellions.

Spiral also has a version of her “Body Shoppe” on Mojoworld, as well as the one on Earth.