SHATTERSTAR IS WHO… WHAT… HUH?!? 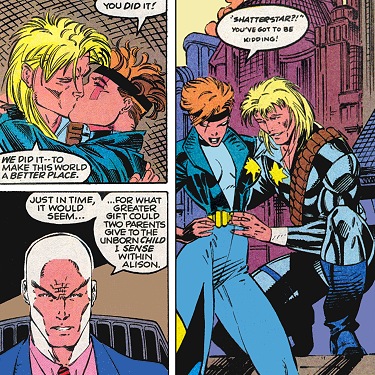 Confused? You should be. The history and origin(s) of Shatterstar follow a twisted path and, while some answers have been provided, others remain frustratingly elusive. When Shatterstar was introduced in 1991, he was presented as one of Arize's creations, sentient Bipeds like Longshot, artificially engineered to be a slave race for the Spineless Ones. Shatterstar was from 100 years in the future of Longshot's timeline, fighting the tyrannical and hereditary Mojo V. In 1992, an alternate origin was suggested for Shatterstar, when Longshot and his lover Dazzler defeated the original Mojo and claimed power in Mojoworld. Dazzler was pregnant and, as the X-Men prepared to return home, Dazzler and Longshot were overheard discussing "Shatterstar" as a baby name.

Then, in 1995-1996, an entirely new origin was suggested — Shatterstar was physically identical to Benjamin Russell, a runaway from Boston, Massachusetts with a criminal record and history of mental problems. Was Shatterstar just a delusion somehow cooked up by Russell's mind? If so, then how did he get to Mojoworld? And what were Spiral and Gamesmaster's involvement? This plot thread concluded with a dying Shatterstar having his life essence transferred into the comatose body of Benjamin Russell... but their connection was never fully explained. Shatterstar's origin would not be revisited until almost twenty years later, in 2013.

To begin, the 1992 origin is accurate — Shatterstar is the biologically conceived son of Longshot and Alison Blaire. From his mother's side, this means Shatterstar is half-human, half-mutant, half-American. From his father, he is also one of the Wildways Bipeds. Thanks to a time loop, however, Shatterstar's involvement with his own family tree goes deeper.

While time traveling into the past of Mojoworld, Shatterstar was studied by Arize, his unique genetic profile mapped and extrapolated in Arize's work. Based on samples taken from Shatterstar, Arize created the Biped known as Longshot. So Shatterstar was naturally fathered by a man who was created based on Shatterstar's genetic material. In other words, he's his own grandpappy.

So who is Benjamin Russell? Unfortunately, this aspect of Shatterstar's history was not addressed in X-Factor (1st series) #259, leaving us only with speculation. So... let's speculate.

(1) Benjamin Russell had no relation to Shatterstar – Seems very unlikely. The two men were identical, instantly recognizable as the same person to anyone who saw them both. A freak coincidence just doesn't meet the facts as they were presented.

(2) Benjamin Russell wasn't real – The manipulative Gamesmaster was deeply involved in the Russell scenario. It's possible he orchestrated the events surrounding "Russell" for his own amusement, to play with Shatterstar's mind. This would require an enormous effort and use of his powers, though. Gamesmaster needed to convince or manipulate Spiral into playing along with the scenario, manipulate someone in the NYPD into fabricating the "Benjamin Russell" files in their database, create computerized patient files at the Weisman Institute which Siryn nevertheless missed during her hacking, etc. All to trick Shatterstar for a nebulously defined goal.

(3) Benjamin Russell was Shatterstar – X-Factor (1st series) #259 ends with Shatterstar and Rictor intending to bring baby 'Star into the future where he was raised to fight Mojo V. But Bipeds aren't "raised" — Arize creates them fully grown as cognizant adults, as far as we've seen. A baby Shatterstar would be out of place, and clearly recognized as a non-Biped during his childhood. And once he reached adulthood, was Shatterstar and everyone who knew him mindwiped so they forgot his normal growth process and started treating him like a standard Biped?

The alternative is that instead of bringing him to the future of Mojoworld, Shatterstar and Rictor brought his infant self to Boston, Massachusetts. Christened "Benjamin Russell," baby Shatterstar was then raised as an adopted or foster child on Earth, unaware of his true nature. When he reached adulthood and manifested his powers, "Benjamin" was transported to the future Mojoverse (by Star and Ric on another time-trip stop or some other way). He would still be mindwiped, since present-era Shatterstar didn't know who Benjamin Russell was, but Mojo is pretty fond of that trick and this scenario prevents EVERYONE from having to get mindwiped.

Unfortunately, this scenario is also flawed considering the fact that Benjamin Russell still existed as a separate being from Shatterstar as of X-Force (1st series) #61 when they merged. If Russell was just an earlier identity in Shatterstar's life he was forced to forget, there wouldn't be two of them.

"Shatterstar" was then brought to the Wildways (either by Spiral or projected by his own power), having no memory of his true identity because what "power fantasy" consciously knows anything about the mind dreaming it up? Shatterstar was an incomplete being who fit the Biped phenotype and became part of the Cadre Alliance's world. Years later on Earth, Shatterstar bonded with his original body as Benjamin Russell and regained his full memories at that time, including the memories that led him to drop his baby self off to become Benjamin Russell in the first place.