THE MUSIC OF DAZZLER

THE MUSIC OF DAZZLER

Although she's spent most of her adult life reluctantly playing superhero, Dazzler's goal was, and always has been, to be a pop singer. And, despite her status as a mutant chronically getting in the way of this goal, she has managed to achieve some minor success in this realm. Considering her publication history, though, how she's done that is anyone's guess. 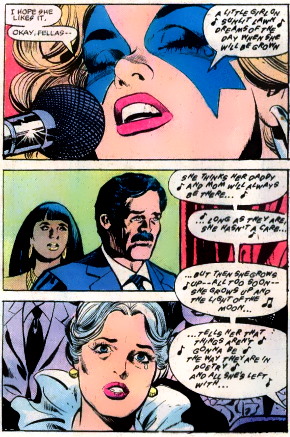 Dazzler first entered the music scene in her premiere issue, Dazzler #1. She spent most of the early part of this series struggling to get gigs, performing covers and making some minor recordings. She managed to perform one original song, "A Little Girl's Dream," in Dazzler #21. Shortly after this, she had to go on the lam with her fugitive sister Lois, and ended up in Hollywood, where she starred in Dazzler: The Movie. And yet, through all this, she never recorded an album.

Shortly after being blacklisted in Hollywood, Dazzler decided to just be a hero (again, no recordings), and soon after, she had to go into hiding with Lila Cheney's band. When her life came under threat by the Marauders, the X-Men finally recruited her, and she spent the next several months of her life running, hiding, and eventually dying with them. Upon resurrection, she was invisible to electronic surveillance and detection — she couldn't even be photographed or recorded, something that obviously would've made recording songs or shooting music videos difficult. And, after she emerged from the Siege Perilous, she had no memory, and shortly after that was whisked away to the Mojoverse, where she then spent the next several years of her life as a rebel against Mojo's tyrannical rule (when, exactly, her invisibility status wore off is a mystery, but it did eventually).

When Dazzler returned from the Mojoverse years later, she resumed performing small gigs. At no point in all of this, though, did she have time to record albums, tour or promote herself as a singer.  Additionally, she lacked representation while living in London — or, in her own words, was “between record labels.”

According to Uncanny X-Men #508 (1st series), she has 11 hit singles. We saw one of her songs reach popularity back in Dazzler #29-30, but as for these others, who knows. Also, at what point could she have recorded and released a rap album, as mentioned in Wolverine: The Best There Is #12. This could've been after her return to the X-Men in Uncanny X-Men #503 .

She did perform another original song upon her return: "The Serpent Is Coming." But that only brings the tally to two. Where are the other 9 songs? When did this renaissance woman find time to record and release so many hits?

In recent years she has attempted to restart her music career numerous times, sometimes in the form of her classic Dazzler guise and others like her band Lightbringr. For various reasons though, all these attempts have failed to take off and Alison often returns to her X-Men family soon after.

As mentioned above, Dazzler has released many singles but very few have ever been referenced on panel. Many of the times she has been shown singing, the panels don't contain many lyrics, often it's her lightshow that is on display. Despite all that, there have been a few songs to make it on to the page. Below is a selection of the notable times she has sung on panel.

A little girl on sunlit lawn dreams of the day when she will be grown
She thinks her daddy and mommy will always be there, long as they are, she hasn't a care
But then she grows up, all too soon, she grows up and the light of the moon
Tells her that things aren't going to be the way they are in poetry
And all's that she's left with are a little girl's dreams

Mmm, mmm, mmm, mmm
Hush now baby
Aaa Aaa Aaa Ahh
Don't you cry
Momma loves you
She will hold you
'Til the day when
We all fly

"Beautiful Dreamer" - X-Treme X-Men (2nd series) #4 (the song was originally written by Stephen Foster in 1864, and has been recorded by numerous artists, most notably Bing Cosby in 1940)

Beautiful dreamer, wake unto me
Starlight and dewdrops are waiting for thee
Sounds of the rude world, heard in the day
Lulled by the moonlight have all passed away
Beautiful dreamer, queen of my song
List while I woo thee with soft melody