On Earth-811, the timeline often referred to as Days of Future Past, the Sentinels ruled America. The death of prominent anti-mutant politician Senator Robert Kelly, killed by mutants, catapulted America into witch-hunts and institutionalized prejudice, as the Sentinel program was created to protect mankind by eliminating mutantkind. The Sentinels' logic extended beyond their creators' expectations, for they decided that ruling humanity would put them in the best position to protect it. The Master Mold overthrew the American government and established the Sentinel Hierarchy. Mutants were rounded up and exterminated or placed in concentration camps, while humanity continued to live and work under the watchful eye of their Sentinel overlords. [X-Men (1st series) #141, Uncanny X-Men (1st series) #142]

A man called Ahab was one of many scientists who embraced their new masters, working with the Sentinel Hierarchy to continue the fight against mutantkind and improve the Sentinels' efficiency. 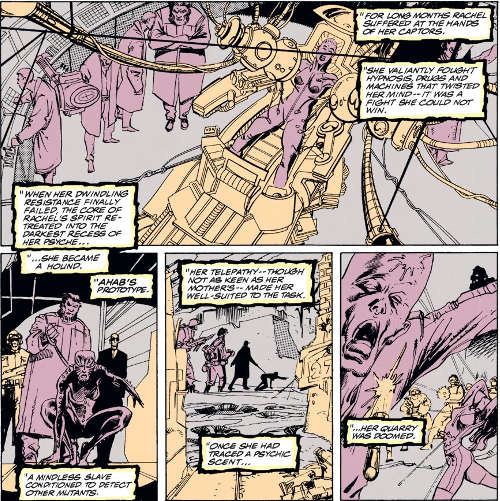 Ahab conceived a method of turning mutants against their own kind in the Hound program. Ahab experimented on Rachel Summers, a young mutant psychic taken from the raid on Xavier's School for Gifted Youngsters once the military identified it as the base of the X-Men. Rachel was subjected to months of behavioral conditioning through drugs, hypnosis, psychology and mechanical influence as Ahab tried to sculpt her into a creature to suit his needs. He was eventually successful, turning Rachel into his Hound prototype. Conditioned with a master-slave relationship to Ahab, Rachel was tattooed as a Hound and cultivated with the ability to use her psychic powers to hunt down other mutants. After this successful experiment, Ahab now knew how to mass produce Hounds, turning mutants into mutant trackers for the Sentinels. [Excalibur (1st series) #52]

Ahab was sadistic in his domination of Rachel and the Hounds that followed. Equal parts animal and victim, the Hounds were kept in pens, collared like dogs and whipped to keep them in line. The mutant's original consciousness still existed in the recesses of their mind, though, and Ahab reminded them how much they had betrayed their own kind by "siding" with him. Whenever he took a mutant from the pens to be killed, he left the door open, taunting the Hounds to try and escape. They never did, though, because of their deeply conditioned fear of Ahab and the belief that their fellow mutants would no longer accept them even if they did escape. Thus, through the psychology of control, Ahab retained power over his Hounds whether he was present or not. [Excalibur (1st series) #75]

Rachel's conditioning was thorough but not complete, however. For every friend, every innocent mutant she tracked down to be killed or imprisoned, a tiny part of her soul cried out. 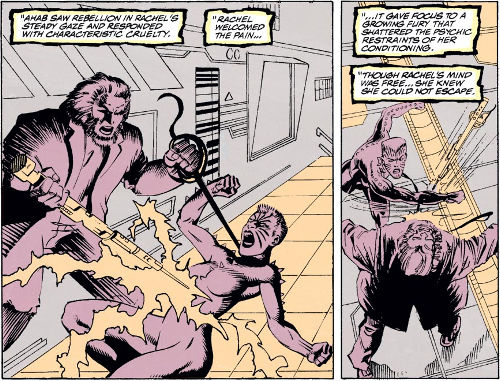 Ahab sensed a growing resentment and rebellion in Rachel, and tried to beat it out of her. He miscalculated, for the pain only fueled Rachel's primal urge to lash out and defend herself. When her conditioning finally slipped, Rachel didn't try to escape but instead attacked Ahab and flung him into his own machinery. The impact caused a short circuit and the energy backlash that followed claimed Ahab's right eye and mangled his limbs beyond repair. Ahab tried to reassert control over Rachel after that but, as a quadriplegic amputee, his days of intimidation were over. Rachel would not submit to him ever again. [Excalibur (1st series) #52]

[Note: A vision experienced by Rachel in Excalibur (1st series) #35 showed her as a Hound hunting down Nightcrawler in Europe, alongside a fully cybernetic Ahab. This contradicts other stories indicating Ahab's cybernetics were not installed until after Rachel shook off her programming and fled her timeline. The anomalies can be explained by the damage to Rachel's memories done by the Phoenix Force and the immediate influence of the demon D'Spayre, who caused this vision.]

Ahab finally abandoned his efforts to influence Rachel, and she was tossed into the general population of mutants at the camps. In time, she congregated with several former X-Men and 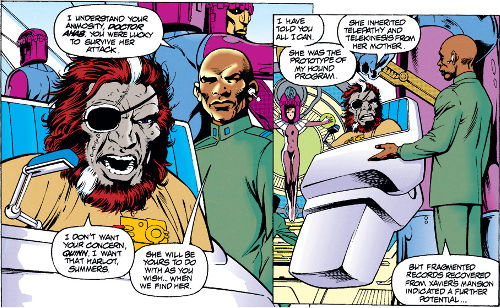 escaped. A decapitation strike at the Sentinel base in the Baxter Building failed, but another strike succeeded in destroying Project: Nimrod, the Hierarchy's facility creating a new breed of Super-Sentinel. Most of the X-Men were dead, including an adult Franklin Richards, but Rachel was missing and the sole survivor Kate Pryde was taken back into Hierarchy custody. [Uncanny X-Men (1st series) #142, 192] Ahab and Professor Quinn reviewed security footage from the Nimrod cyberobotics facility before it was destroyed, which seemed to indicate Rachel and the Nimrod prototype traveled back in time. They attempted to use residual temporal energy on Kate Pryde's body as a tether to track their missing "property" but Kate managed to activate her phasing power during the experiment, disrupting the machinery and vanished as well. [Excalibur (1st series) #66]

Fearing Rachel or some other force would attempt to alter the timeline to the benefit of mutantkind, Ahab established himself in a pantemporal nexus to act as the guardian of time for 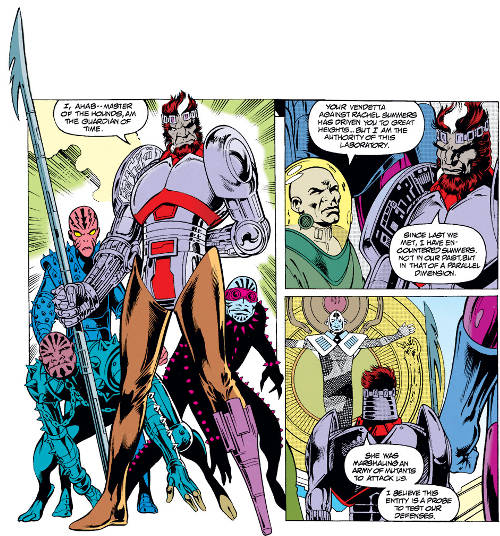 the Sentinel Hierarchy. Called the Tomb, this facility existed outside of time itself while allowing him to monitor the timestream for anomalies or incursions that threatened his work in the future. Ahab underwent cybernetic surgery, encasing himself in a bionic carapace with artificial mechanical limbs replacing those he lost to Rachel's attack. Ahab was attended by a cadre of Hounds, Sentinels and drones, and had perfected his Hound procedure so that the complete behavioral conditioning and physical transformation could be applied to a victim in seconds, making an instant loyal Hound. [Days of Future Present crossover] Ahab's concern for the sanctity of his timeline was only deepened when he encountered a future version of Rachel Summers while hunting mutant rebels. This Rachel indicated she knew of Ahab's future fate, and saw no reason to seek further revenge against him... now. [Cable (1st series) #71]

Ahab left his humanity behind after this, retreating to the Tomb in order to be constantly on guard for temporal incursions. In fact, he would literally shut his humanity down, putting his organic components into metabolic stasis while his computers monitored the timestream, awakening him only when an issue needed addressing. Because the influence of Rachel Summers and Kate Pryde on the past created an alternate timeline between Earth-811 and Earth-616 (instead of changing their own future), Ahab did not intervene on that plot. 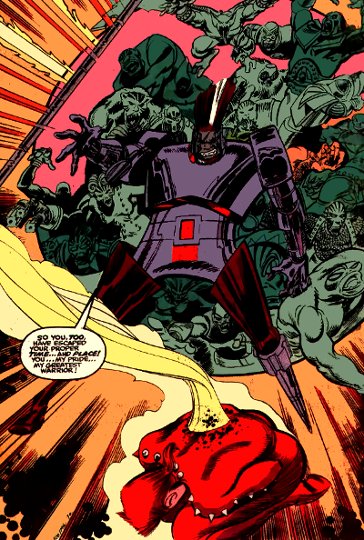 His systems did alert him to a "Franklin manifestation" in that same timeline, however. Although Franklin Richards was killed in the same breakout led by Rachel and Kate, his Omega-class mutant consciousness traveled back down the timeline in a primal scream, rejecting his own death. This echo of the adult Franklin sustained his presence (and vast reality-altering powers) by drawing power from his younger self and the Phoenix Force hosted by Rachel. Ahab and the Sentinel Hierarchy determined Franklin's presence in this key era of history and power to shape reality did threaten their future beyond merely the possibility of divergent timelines.

Ahab made several attempts to seek and destroy Franklin Richards, targeting both the adult's ghost and the younger Franklin Richards native to the timeline. He also located Rachel for the first time since her escape in the destruction of Project Nimrod. Using his psychic harpoon, Ahab reapplied the Hound programming to bring Rachel back under his control. She had become too strong for his influence, and shook off the Hound transformation in seconds. However, her dark side was exposed for a minute in front of her friends, including Cyclops and Marvel Girl, her future parents. Ahab's clashes with Franklin caused quite a commotion, drawing together the Fantastic Four, New Mutants and X-Factor to oppose him. They located the tesseract pocket containing the machinery that stabilized Ahab in the present and destroyed it, automatically displacing Ahab and his hordes back to the Tomb. 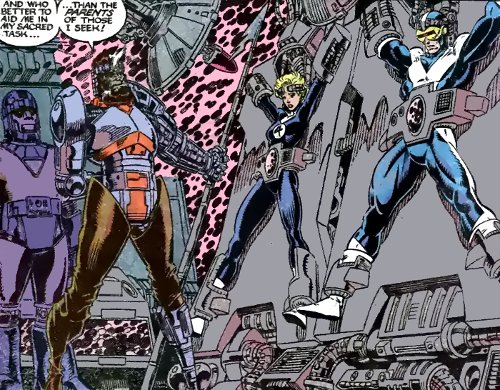 Switching tactics, Ahab raided Four Freedoms Plaza and kidnapped Cyclops and the Invisible Woman. Using his Hound programming at the Tomb, he genetically and behaviorally rewrote them into two of his trackers, using the Hounds' genetic sensitivity to blood relations to locate Franklin and Rachel. Once the kids were surprised and captured, Ahab's pride made him spend hours trying to break Rachel again, using all of his tricks, old and new. It was for naught. Rachel would never again be his slave, and was prepared to die before she changed back to what he wanted.

The Fantastic Four and X-Posse triangulated the space-time location of the Tomb, launching a surprise attack on Ahab's home base. Ahab was at an advantage in his home base, neutralizing nearly all the invaders using failsafes in the Tomb, but Franklin was nevertheless freed to turn his full power against Ahab. 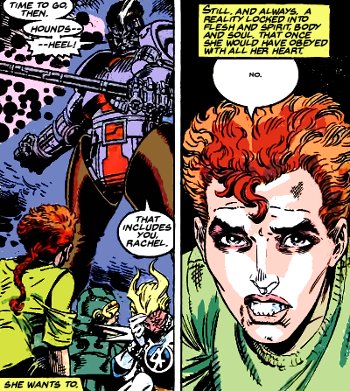 The genocidal cyborg tried one final time to get Rachel to heel and then tried to impale her on one of his psychic harpoons when she rejected him. Marvel Girl threw herself in the path of the genetically-keyed harpoon, however, saving the life of her future daughter. Rachel's connection to her true family was reaffirmed, ending any influence Ahab and his twisted family of Hounds had over her. Ahab escaped into the timestream, hoping to strike at Phoenix another day. (Although the ghost of Franklin Richards dissipated soon afterwards, the power of the Phoenix was fortunately able to reverse the Hound transformation on Cyclops and Invisible Woman.) [Days of Future Present crossover]

Ahab's hatred of Rachel and paranoia made him fear she was marshalling forces in the past to attack his future. To ensure dominance, he counseled the Sentinel Hierarchy to begin colonization of other timelines, eliminating mutants throughout the multiverse instead of simply their own time. His fears seemed confirmed when a temporal probe arrived in the same laboratory from which Kate Pryde vanished from years earlier. This probe actually WAS Kate Pryde, reincarnated as the entity known as Widget through a unique interaction with the temporal experiment equipment used on her by Professor Quinn. As the disoriented Widget skipped through the timeline, Ahab monitored its progress in order to intercept.

Ahab located Widget in the presence of the Resistance Coordination Executive, England-based freedom fighters opposing Sentinel expansion outside of America. 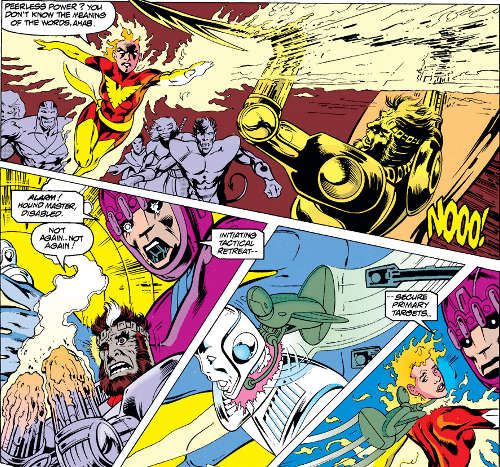 His Sentinels and Hounds tried to secure the temporal probe, but Widget was already making contact with Phoenix back in the past of Earth-616. As Phoenix and Excalibur began to cross over into Earth-811, Tangerine of the R.C.X. mind-blasted Ahab to prevent him from neutralizing Widget. Ahab and the Sentinel trackers turned on Tangerine, but Rachel emerged from the rift and incinerated Ahab's psychic harpoon and his hands with it. The cyborg Hound master fell into shock while his Sentinel escort initiated a tactical retreat, snagging Phoenix and Widget with tracker probes before teleporting away. [Excalibur (1st series) #66]

Ahab's injuries left him in the cyberobotics repair facility during the events that followed. Excalibur and the R.C.X. rallied their forces and lay siege to the Sentinel Hierarchy at the Hive. Phoenix and Widget escaped as well and confronted the Sentinel Hierarchy directly inside its psybertronic brain. Phoenix's telepathy filtered through Widget's unique bio-mechanical sentience, which allowed them to reprogram the Hierarchy's core directives and, through it, all Sentinels throughout the world. Ahab emerged from his restoration just in time to witness Rachel Summers' victory, and tried to assassinate her with a psychic harpoon. To his horror, Ahab's harpoon was stopped... by a Sentinel! The Sentinels were now programmed to protect all life from harm: human, mutant or otherwise. With one act, Rachel's future had been saved from mutant oppression by the Sentinels. 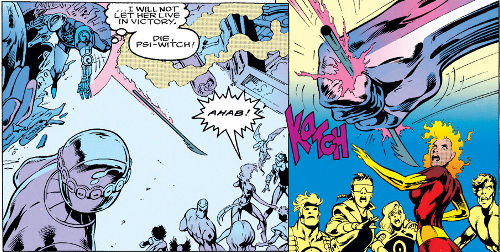 Furious at his losses, Ahab teleported away, while threatening to one day kill Phoenix and Excalibur for what they had done. Thus far, it seems THIS version of Ahab has not returned in a recognizable form, so he may still be out there somewhere in the timestream, plotting his revenge. [Excalibur (1st series) #67]