The X-Men have always fought an uphill battle against hatred and fear. Although the original impetus for the Days of Future Past timeline was prevented years ago, that dark future where mutantkind is penned in concentration camps like animals by a fearful mankind continues to resurface. Bishop's timeline, Days of Future Tense, Weapon X: Days of Future Now, Years of Future Past... each a slight variation on the theme that the worst possible future for mutantkind may be inevitable. A version of Ahab emerged in yet another of these timelines, the future of the Red Onslaught.

On second glance, however, which version of Ahab he is becomes more difficult to answer. The horrors of the Red Onslaught were a possible future, but not years or decades from now. When it

was first glimpsed at, this future and Ahab's part in it came from a flash-forward of a mere three months. [Uncanny Avengers (1st series) #4] No contemporary version of Ahab is known to exist yet in the Earth-616 timeline. Could a possible future really have produced this Ahab in that short a span of time? When last we saw Rory Campbell, he was at worst a morally ambiguous researcher. When last we saw Famine, he was a brainwashed Horseman of Apocalypse. Admittedly, it had been years since either of them appeared, but it seems unlikely they could have evolved into such an archetypical Ahab in such a short time or behind the scenes. It's possible the Red Onslaught's Ahab is the original Ahab from Earth-811, a known time and dimension-hopper last seen teleporting away and swearing his revenge. Of course, with Kang as his patron, this Ahab could literally have come from anywhere in time and space. The cybernetic armor of yet another Ahab was found on Kang's wall of trophies taken from fallen foes. [Uncanny Avengers (1st series) #8AU]

This Ahab was Houndmaster and warden of the pens in this future, overseeing the mutant population subjugated by the Red Skull after his propaganda and telepathic abilities turned humanity against the mutants. Ahab was also an agent of the conqueror Kang, who had kidnapped and raised the mutant twins Uriel and Eimin, heirs to Apocalypse. As part of his Machiavellian plotting, Kang wished to convince the twins that man and mutant could never live together in harmony, and they must one day lead mutantkind in a mass exodus from Earth (thereby freeing Kang from potential rivals for power in domination of the planet). To drive this point home, Kang left Uriel and Eimin in Ahab's future for years at a time as children, hardening them against humanity.

On one occasion, Uriel and Eimin tried to escape from the camps, but were betrayed by a human ally and caught by Ahab and his Hounds. Eimin tried to take responsibility to protect her brother, claiming she saw an opening and took it. Ahab took this turn of phrase as an opportunity to terrorize the twins further. He ordered Uriel to cut out Eimin's eyes with his wings (so she wouldn't "see" openings in the future), or else Ahab would kill her. Uriel reluctantly mutilated his sister in order to save her life. [Uncanny Avengers (1st series) #12]

The Apocalypse Twins were eventually released on the present day by Kang, and carried out their plan to rapture Earth's mutant population. However, they also provoked the Celestials by killing 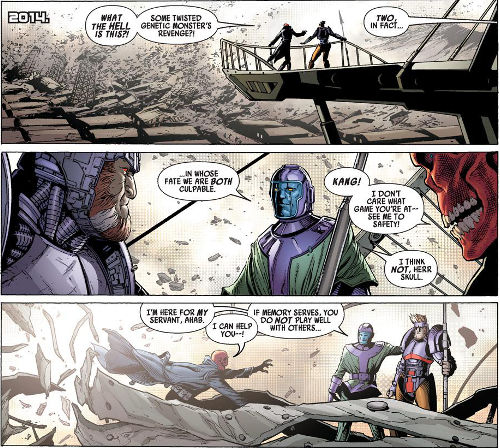 one of their number with Kang's trophy, the Asgardian axe Jarnbjorn. Thus the Celestial Executioner arrived at Earth and destroyed the planet just as the mutant exodus was completed, wiping out humanity. Additionally, because of the tachyon dam they established, the Apocalypse Twins ensured no time travelers could visit this moment while all future timelines were bound to it, denying Kang his future dynasty as future Earths crumbled from existence around him. To counter this catastrophe, Kang recruited allies from seven future Earths as their realities disintegrated, including Ahab from the Red Onslaught future. The Red Skull was left behind to evaporate in the crumbling timeline as Ahab returned to his true benefactor. [Uncanny Avengers (1st series) #14]

Several years later, the surviving members of the Avengers Unity Squad finally brought down the tachyon dam on the new mutant homeworld, allowing Kang, Ahab and their Chronos Corps to reach back to that point in the timeline. In this uneasy alliance, Kang worked with the Avengers to send their consciousnesses back in time to destroy the tachyon dam at an even earlier point, allowing the Chronos Corps to skip back further and help prevent the destruction of Earth. However, Kang then revealed to the Avengers this had been part of his plan all along, setting up the players to give him a chance at stealing the power of the Celestial Executioner itself. The Unity Squad defeated him and his Chronos Corps and saved the Earth, so Kang sent most of his Corps back to their home realities. Ahab, though, he left behind as revenge against the heroes to help instigate the Red Onslaught future he came from. [Uncanny Avengers (1st series) #18-22]

(Thinking fourth-dimensionally, this veers close to an ontological paradox. If Ahab succeeded in helping Red Skull create the future he came from, then where did Ahab come from originally? If

Ahab was inserted in the timeline by Kang, removed to join the Chronos Corps, then returned to the past and inserted into the timeline by Kang, isn't his whole existence a loop? Fortunately, these existential questions are avoided because Ahab does not succeed, as seen below. In any case, this does seem to be further evidence that Ahab was planted in the original Red Onslaught timeline he came from, and was not a native.)

Ahab presented himself to the Red Skull and allowed the villain to read his mind.  Although the Skull chaffed at being used by Kang as an instrument of his revenge, he recognized that Ahab believed in subjugating mutants more than he did in serving Kang, and welcomed his help. In particular, the Red Skull enjoyed Ahab's addition of adding concentration camps for mutants at his base in Genosha, wondering why he didn't think of the idea first. [Uncanny Avengers (1st series) #23] 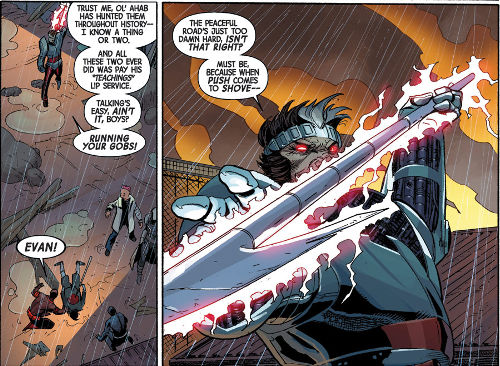 Ahab joined the Red Skull's S-Men in attacking the Avengers Unity Squad and Magneto. The Master of Magnetism was deliberately provoked by the villains by the hatred and imagery they embraced. When Magneto struck at the Skull to kill him, he inadvertently recreated the circumstances that led to the birth of the original Onslaught: Magneto's rage mixed with Xavier's telepathic mind. The Red Skull used this mixture of elements to not only survive Magneto's killing blow, but evolve into an immensely more powerful psychic entity as the Red Onslaught. [Uncanny Avengers (1st series) #24-25]

The S-Men were sacrificed as victims to Magneto's rage, but Ahab survived and continued fighting alongside the Red Onslaught. He held his own against Cyclops, Havok, Magneto, 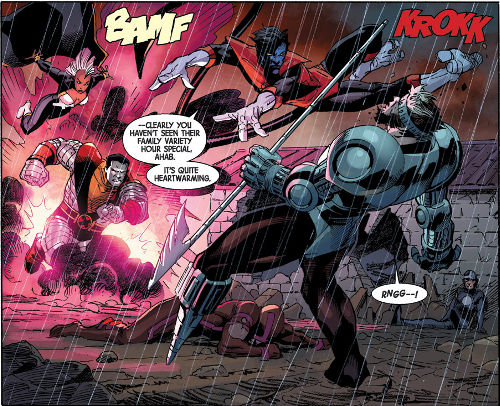 Genesis and Quentin Quire, but eventually succumbed when a force of additional X-Men and Avengers arrived. With the rise of the Stark Sentinels, the super-villain counterassault and the Inversion effect that followed, Ahab's disappearance from Genosha went unremarked on. [Avengers & X-Men: AXIS #1]

Ahab has become emblematic of the hatred man feels towards mutant, and has proven to be a persistent meme across multiple realities. In one form or another, he will someday return to menace the X-Men and mutantkind in general. It's only a matter of time.