The fate of Rory Campbell remains unrevealed, or at least unclarified. Did he succumb to destiny, or rise above the lure of hatred to maintain his good nature? While his final decision has not been directly addressed, a curious anecdote about his fate has arisen.

During the Gathering of the Twelve, Apocalypse brought together many allies, including the Children of the Sun cult in Egypt and the alien Skrulls. Naturally, he also organized a new group of Horsemen, with the Shi'ar Deathbird as War, former Horseman Caliban re-established as Pestilence and even Wolverine as his latest Death. And then there was Famine. 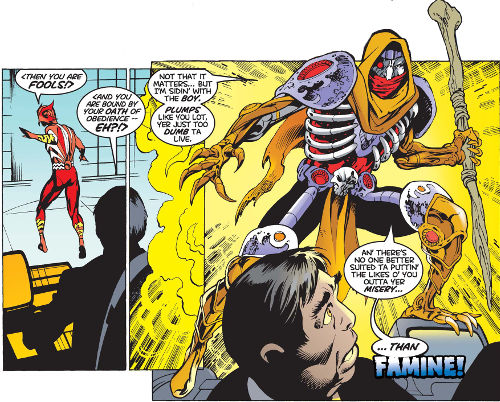 Famine was a curious individual wrapped in rags and carrying what appeared to be a wooden cane. He had the power to drain energy, to drain life, and used this power in confrontation with Sunfire, one of the Twelve. Famine captured Sunfire on behalf of Apocalypse, who needed all members of the Twelve to support the machine governing his Ascension. [X-Men (2nd series) #96] When the X-Men tracked Apocalypse's activities to Egypt, Famine was present again. He and Caliban captured Professor Xavier for the Twelve during a chaotic battle between the X-Men and the shape-changing Skrulls outside the pyramids. [Uncanny X-Men (1st series) #377] 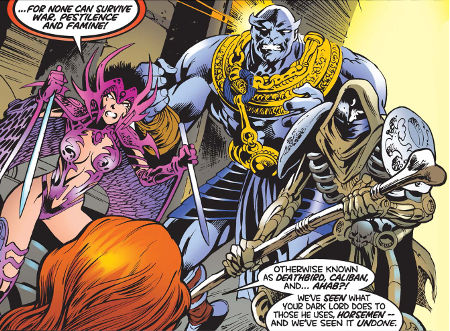 Later on, the Twelve escaped Apocalypse's diabolical machines. With Wolverine having regained his senses, Famine and the remaining Horsemen (War and Pestilence) opposed the Twelve as they attempted to bring the fight to Apocalypse. It was here that Jean Grey surprisingly recognized Famine as Ahab. Before this revelation could be expanded upon, however, Mikhail Rasputin leapt upon the Horsemen and used his dimension-spanning power to displace them all from the battlefield. Since that time, Mikhail has returned. As has Caliban. As has Deathbird. However, nothing was ever heard of Famine again. [X-Men (2nd series) #97] 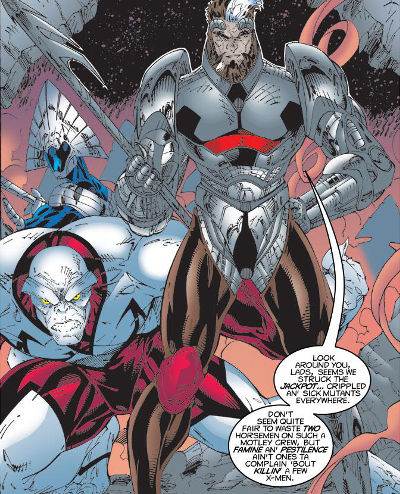 If Jean's brief identification of Famine weren't enough, one of the distorted realities Apocalypse cast soon after with the power of the Twelve showed a much more clearly identifiable version of Ahab acting as Famine to his Horsemen. [X-Men Unlimited (1st series) #26]

But where did this Ahab come from? Was Famine the final fate of Rory Campbell from Earth-616, falling to his destiny as Ahab only to be controlled by Apocalypse anyway? Was Famine the Ahab of Earth-811, a known time traveler last seen escaping from Excalibur in the future? None of Rory's former teammates from Excalibur were present for Jean Grey's identification or commented on it later.