• Psionically transduce the molecular structure of anything he touches, converting it into simple elemental states or any form of complex chemical compound whose physical composition he fully understands

NOTE: Alchemy was created by a British comic book reader named Paul Betsow as part of Marvel Comics’ Mutant Registration contest for the best fan-created mutant. Although it was initially said that the winning entry would appear in an issue of New Mutants, Alchemy debuted in X-Factor instead.

Around the time Thomas Jones manifested his mutant powers, he was studying for the university entrance examination. The British teenager had promised his late father to make it out of poverty, and he was determined to stick to his word. However, he found that studying chemistry was always giving him raging headaches. This was the first sign of his mutation and, while trying to recall the properties of the elements of the periodic system, he was involuntarily changing the molecular structure of his pen, transmutating it into those exact elements.

With gold being one of the elements that Thomas mastered, he caught the attention of Troll Associates Inc., a group of trolls who had been driven underground by humanity centuries ago. The Trolls were determined to reclaim the British Isles for their kind and other magical creatures. In order to get there, they wanted Thomas to create so much gold for them that they could collapse the British economy. On top of that, they wanted to make a public statement by having Thomas transform the queen of England into gold too. 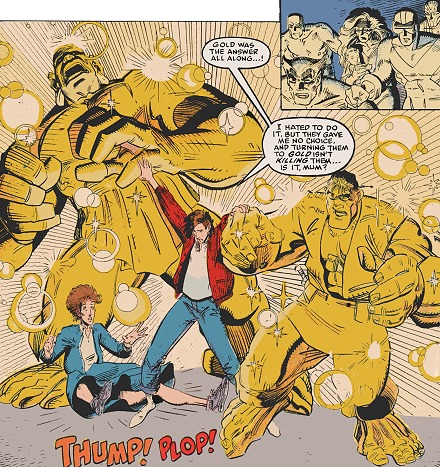 Fortunately, Thomas’ mother had witnessed her son’s kidnapping and called X-Factor for help. While they managed to track the Trolls to their hidden base by following a trail of gold objects that Thomas had left behind, the American-based heroes ended up captured by the Trolls themselves. By the time the heroes freed themselves, the Trolls had already taken Thomas’ mother hostage to force the boy into their service. Realizing that the Trolls wouldn’t stop no matter what, Thomas used the distraction provided by X-Factor and transformed the two leaders of the Trolls into gold, ending the conflict. Although X-Factor offered to train him in the use of his powers, Thomas decided to enroll at university to study bio-chemistry so that he could get a deeper understanding of his powers. With those fully mastered, he hoped he could restore the two trolls to flesh and blood and become a full-fledged super-hero named Alchemy. [X-Factor (1st series) #41-42] 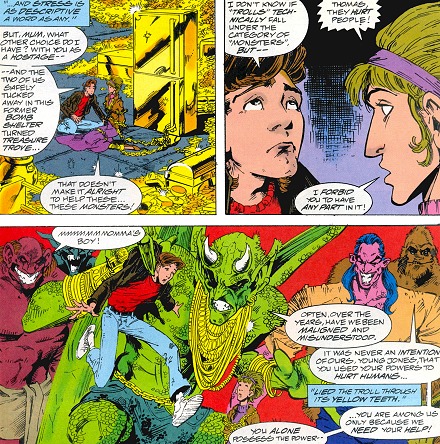 A couple of years later, the remaining Trolls went after the Joneses again, this time kidnapping Thomas’ mother first. Alchemy tried calling X-Factor for help, but the call was forwarded to the X-Men instead. They in turn alerted Excalibur, as that team could reach Thomas much quicker. However, they arrived in London too late, as Thomas had already been forced to obey the Trolls’ every command. On their orders, Alchemy transformed some policemen and even two members of the super-hero group into gold.

The tide turned, though, when the freakishly looking Nightcrawler pretended to join the Trolls, enabling him to free Thomas’ mother. Alchemy then used his powers to turn the other Trolls into metal statues as well, and then proceeded to restore the trapped humans and heroes to their regular selves, thus proving that he had fully mastered his gift. [Excalibur (1st series) #57-58]

Alchemy was confirmed as one of the few mutants on the planet who retained their abilities and mutations post M-Day, during which 90-95% of Earth’s mutants lost their powers. [X-Men: The 198 Files]

In the years that passed, Thomas managed to stay out of the X-Men’s lives and off the radar from their perpetual wars. Nonetheless, he did step up when Legion decided to remove mutophobia from Great Britain. Thomas, along with other British mutants, used their powers to help those in need in a bid to show the regular citizens of the country that mutants were there to help. [X-Men Legacy (2nd series) #13-14]

[Note: In X-Men Legacy (2nd series) #24 Legion removed himself from all of reality and it is unclear as to whether Alchemy’s actions were preserved or undone as well] 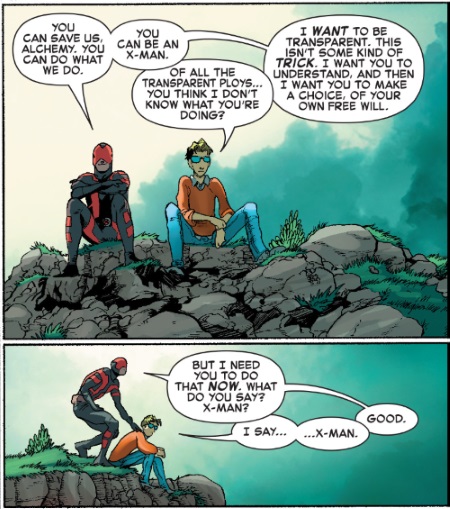 Despite his altruistic actions Thomas went back to his home in Yorkshire and kept far away from the affairs of the rest of the mutant population. That all changed when the Inhuman’s Terrigen mists were released into Earth’s atmosphere and the fate of mutantkind was once again in jeopardy. Two Terrigen clouds were slowly circling the globe, poisoning any mutants that lay in their path.

After seeing first-hand the devastating effects of the clouds, Emma Frost came up with a plan to rid the world of them and Alchemy would be a critical part of it. The Stepford Cuckoos retrieved him from Yorkshire and took him to Madrid, where one of the clouds was about to envelop the city and kill the mutants in it. Unbeknownst to Alchemy and the other X-Men, Cyclops had died from the Terrigen mists a short while before and Emma Frost was using her telepathy to make everyone think he was still alive. Alchemy was unsure if he would be able to help out but “Cyclops” told him that the mutants of the world needed him. 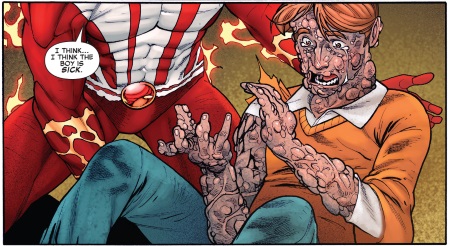 Despite having reservations about the plan, Alchemy reluctantly agreed to help out, and so Sunfire flew him high up in the air above the cloud. Alchemy was dropped through the deadly Terrigen, changing its composition to something much more benign as he fell through it. Sunfire caught him as he dropped out the bottom of the cloud but he immediately noticed something terrible had gone wrong. Alchemy believed that he had changed the Terrigen before he could let any of it touch him but he had miscalculated. The effects of the Terrigen were instantaneous and he quickly succumbed to the deadly M-Pox, the disease that mutants developed when coming into contact with the mists. Worse, whereas 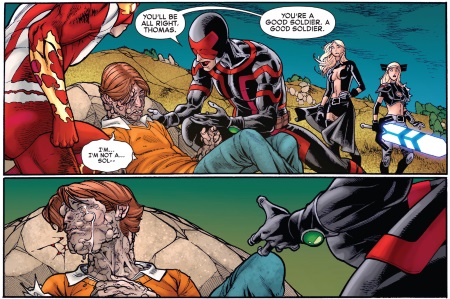 many of mutants battled M-Pox for weeks or months, Alchemy had received a concentrated dose in the cloud and he only had moments to live. “Cyclops” rushed over and tried to comfort him by saying that he was a good soldier. Alchemy died denying that he was a soldier, a sentiment that he lived by all his life. [Death of X #3-4]

Even though he had tried his best to stay out of the X-Men’s world, he died standing by their side, demonstrating that a hero lies deep within even the most unassuming person.