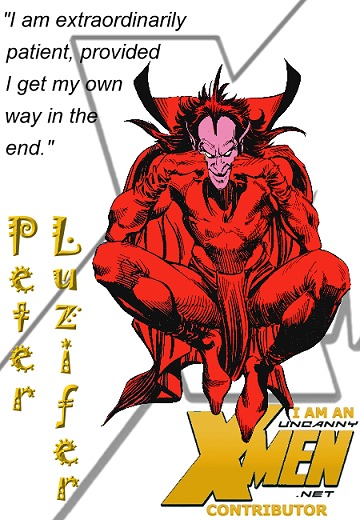 In the Brief:
Started my own website “Point of View – the other side of the X“ in November 2000, and was contacted a few months later by UXM.Net founder, Dean Clayton, about joining. I took some time to think and eventually agreed to my site‘s material being transferred, which now can be found in the Villain teams and Merging Minds sections.
Since then, one idea has been chasing the other, resulting in lots of different sections and categories for the UXM.Net, the two most successful ones being the Issue Summaries and the Character Spotlights. And, although I had no idea of html coding or webpage design when I started, I picked up quite a lot along the way and find myself more and more involved with the visual aspects of the site.

History:
My story starts in a small village with about 1.500 inhabitants, and I HATED it there. I always felt kind of stuck there, everyone knowing each other and the nearest “town“ (at least the people living there think it is one) being a 30-minute drive away. That doesn’t sound much, but it is when you are a minor and can’t drive.

Whatever. I got into comics around age eight or nine, when a neighbor who thought himself too old to keep on reading passed me down his books. They were some German reprints of Marvel Comics - mainly Avengers, Fantastic Four and the X-Men. Ever since, I was hooked and had this fictional world I could escape into. At first, I started collecting the German reprints, but as the translation quality deteriorated and many series were not reprinted at all, I switched to the originals at one point.

When I had finished school and civil service, I finally moved away, to that “town“ mentioned above where I trained to become a nurse. Actually the plan was to become a doctor after that, but during my time in hospital I learned that doctors have the most hierarchic structure next to the military. I certainly couldn’t imagine studying for about six years, only to say “yes Sir“ to the chief medic for the foreseeable years afterwards.

My nurse training finished, I moved again, now to a real city, in fact the third or fourth biggest in Germany, with over one million people living here. Having a lot more possibilities at my disposal, I decided to pursue another dream of mine and entered acting school, next to my regular job as a part-time nurse. The four years at stage school were rather intense and I learned much more about myself than during the entire two decades before. It’s a time that changed me deep down, and I wouldn’t want to miss any of it. At this point, I have to address my online alias of “Peter Luzifer.“ Actually, that’s an amalgam of the two favorite roles I portrayed - Peterbono in Jean Anouilh’s “Le Bal de Voleurs“ (= Ball of Thieves) and Lucifer in Arthur Miller’s “The Creation of the World and Other Business.“

Finally, I graduated from acting school, and fell in some sort of hole. What to do next? I didn’t know, and while I did an okay job as an actor/singer, I didn’t really miss being on stage. It wasn’t a necessity for me as much as it seems to be for others, and acting is one of those things that you either do a full 100%, or not all. Time went by, and while I still worked part-time in the hospital, I knew that this couldn’t be all. Eventually, I had a chance to see a job counselor, and while I didn’t expect much, she made me see what I really wanted – to help.

Problem was, as a nurse I was somewhat reduced in only helping people in a medical way, whereas on stage, where you actually try to address society as a whole and on a psychological level, you fail to see any direct result of your work. Right now, I am studying to become a social worker, as this occupation combines the two positive elements from my former jobs. The problems I will meet are more than just medical, and I’ll be interacting with people directly and one at a time, giving me the opportunity to see what, if any, effect my work will have. Naturally to provide a living, I still work in the hospital part-time, but if everything goes according to plan, I will be done with studying and ready to change jobs around spring 2007. Wish me luck!

But whatever job I will end up in, or how many times I will move, the X-Men were and always will be my first love.

Lines I love:
“So long as I remain true to myself, I see no reason to apologize for how I appear to others." - Storm, Uncanny X-Men #246

“Certainly a smart woman such as yourself would find it a bit ironic to command magnetism, and yet you have trouble with feeling attractive and tend to repel things." - Dr. Leonard Samson to Polaris, X-Factor #87

“Life can be cruel in a way that I can't explain." - Jennifer Lopez, Ain’t It Funny

“It’s not fair to accuse me of vanity. I just thrive on controversy.” - She-Hulk, Sensational She-Hulk #34

Fanmail printed:
Of four or five letters sent, two were printed in the letters pages of Marvel comics. One in Alpha Flight #126, though in an abbreviated version, the other in X-Factor #142. (Do I have to worry about the fact that both books were canceled half a year later ?)