Little is known about the childhood of Chinese-born siblings Jimon and Zhao Tang. At some point after they had manifested their mutant powers, the Chinese government apparently tried to recruit them as Silver and Gold into China Force, their own team of super-powered operatives. The team had been created in response to the United States and the Soviet Union having their own governmentally sanctioned groups to rely on.

[The information about the siblings being recruited into China Force stems from Silver’s entry in the Official Handbook to the Marvel Universe ’89 #7. The same entry, though, refers to Silver and Auric’s last name as “Kwan”, a name that never saw print in any comic book. Instead, their last name was revealed as “Tang” in Alpha Flight (1st series) #121.]

For yet to be revealed reasons, three members of China Force chose to defect, and Jimon and Zhao sided with them. Together, they made their way to the still British ruled Hong Kong. There, the lose-knit group unsuccessfully attempted to overthrow the city’s government in order to to prevent the planned transition of Hong Kong back to China. [Marvel Graphic Novel: The Agent] 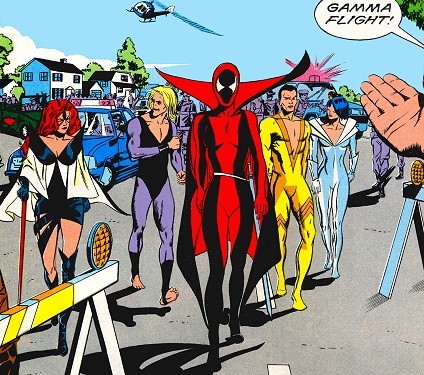 With their plan thwarted, the group disbanded and went their separate ways. Now calling themselves Silver and Auric the siblings sought political asylum in Canada. As the nation’s own hero team, Alpha Flight had gone rogue and subsequently missing, the government was in the process of creating a new hero team to replace them. In exchange for Jimon and Zhao agreeing to serve on this newly invented team, Gamma Flight, they were granted Canadian citizenship. [Alpha Flight (1st series) #90]

By the time Alpha Flight returned from a journey through several other dimensions, Gamma Flight had already made their public debut. Both teams met when they responded to a crisis in Montreal. After working together to end a series of demonic possessions, Gamma Flight informed Alpha Flight that the government was no longer sanctioning Alpha Flight, and that they would have to arrest them if they would continue to operate within Canada. [Alpha Flight (1st series) #76]

Before long, Gamma Flight received a report of Alpha Flight being active again. While their teammates seemed eager to take down the rival group, Silver and Auric showed no such emotional response. [Alpha Flight (1st series) #79-80] Though Alpha Flight initially let 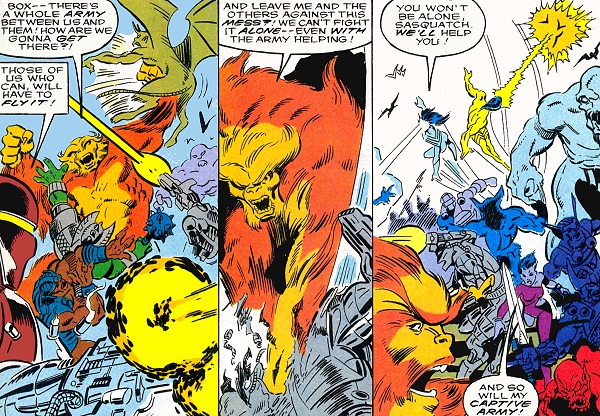 themselves be taken to prison, they broke out as soon as they realized that their enemy, Llan the Sorceror, was preparing to invade Earth. A second encounter with Gamma Flight resulted in Gamma Flight’s defeat and Alpha Flight was finally able to convince the new team that they had to pool their efforts to stop Llan. During the battle against Llan’s overwhelming forces, Silver and Auric watched out for the other heroes, Alpha and Gamma alike. [Alpha Flight (1st series) #84-86]

After Llan had been defeated, the status of both Canadian teams was decided in an official hearing. Alpha Flight cleared their name and was re-established as the main group, with Gamma Flight being downgraded to training status under Alpha’s supervision.  Upon this news, Silver and 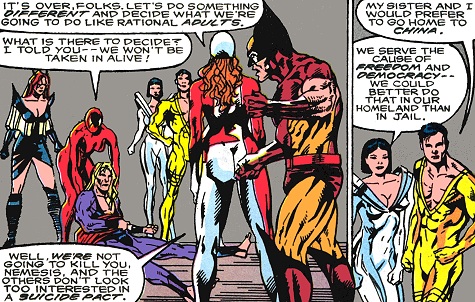 Auric’s teammate, Wild Child, snapped and went on a rampage during which he injured several people. He was quickly apprehended and about to be shipped off to prison, when Gamma Flight’s leader, Nemesis, stepped up for him. She demanded from the rest of Gamma Flight to also stand by Wild Child’s side, but Silver and Auric had no such interest. Instead they chose to quit altogether and return to their native China to continue fighting for freedom and democracy. [Alpha Flight (1st series) #87-90]

Unfortunately, the siblings never made it back to Asia. They were still in Vancouver when they found themselves under attack by operatives of Target Technologies. The corporation had invented technology to neutralize super-powers, and they easily kidnapped Silver and Auric, just like they had captured other heroes before them. While Auric was soon killed and dissected, Silver

was exposed to a series of painful tests and probes to determine the nature of their powers. Jimon was found by the New Warriors and Spider-Man, but she pleaded with them to not waste precious time trying to free her from her prison and instead take the fight to the mastermind behind the corporate, the Sphinx. Reluctantly, the New Warriors did as told. In the end, the Sphinx exploded after being overloaded with Speedball’s raw kinetic energy. Silver joined her brother in death when the entire building collapsed. [Amazing Spider-Man Annual #26, Web of Spider-Man Annual #8, New Warriors Annual #2]

Unfortunately, when Alpha Flight held a funeral for Jimon and Zhao several weeks later, they discovered the coffins to be empty. Investigating the disappearance of the corpses, Alpha Flight learned that one member of the clean-up crew dispatched by Target Technologies to secure the 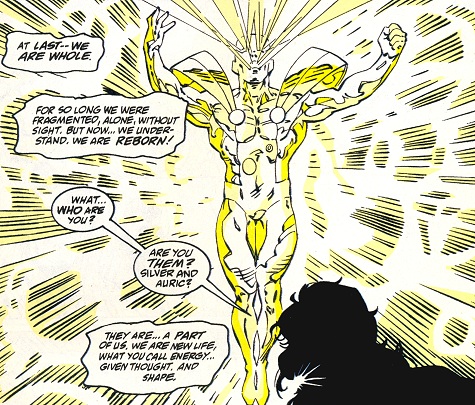 site of the explosion, a scientist named Hedison,  had registered a strange kinetic energy signature right before he had a vision of Silver and Auric reaching out to him. Hedison had been kidnapped since, but Alpha Flight managed to track him down. They found the scientist and the corpses of their friends in the thrall of the Brass Bishop, who planned on extracting the Sphinx’s omnipotent energies they had all been infused with and sell them to the highest bidder. While the Brass Bishop was busy fighting Alpha Flight, Auric, Silver and Hedison merged into a single, new lifeform. At first out for revenge, the composite being was soon convinced by Alpha Flight to honor the legacy of the Chinese siblings by not turning into a killer. It then departed from Earth, [Alpha Flight (1st series) #121] never to be seen again.