None (feathers in
various colours)

The somewhat bizarre creature called Bird Boy was the most prized creation of the diabolical geneticist Dr. Animus, an associate of Cameron Hodge and the Right, who was contracted to find a means to stop genetic mutations by researching with animal specimens. Animus dubbed himself the Ani-Mator and set up base on an island in the North Atlantic called Paradise. Instead of following through with what he was contracted to do, Animus spliced the animal specimens with human DNA in order to use the new creatures as slaves. The Ani-Mator was cruel to his creations, restricting their access to food and deliberately torturing them as part of a series of tests which occurred at every full moon. One full moon, the Bird Boy escaped the island dubbed Paradise, fearing he would not survive the tests. Being one of the few winged creatures on the island, the “fight or flight” instinct certainly applied to him. [New Mutants (1st series) #59-60]

An undetermined amount of time later, Bird Boy was rescued from an ice floe in the North Atlantic, half-frozen and starved. Due to his weakened state, Bird Boy was easily captured and quarantined on Governors Island, off Manhattan. One week later, on the night he was due to be transferred to a research facility, Bird Boy was accidentally freed by the New Mutant Cannonball, who blasted through the building in which Bird Boy was held during a battle. [New Mutants (1st series) #55]

Desperately hungry and in unfamiliar surroundings, Bird Boy attempted to settle into his new environment, catching fish by aerial dives into the Hudson River. It was in such a hunt that he was found by the New Mutants, who had learned of Bird Boy’s escape from the morning news. 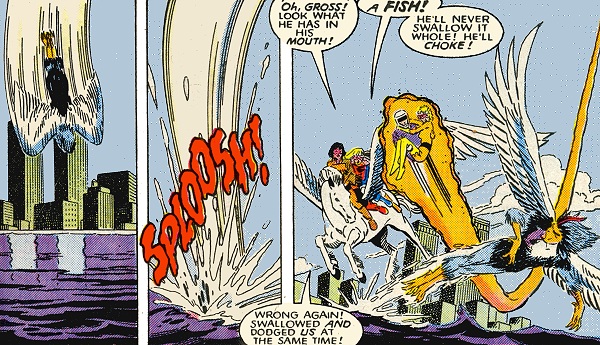 Unfortunately, the Hellions had also seen the report and arrived, entering into a brawl with the New Mutants as both teams chased Bird Boy. Eventually, the New Mutants won out, luring the mutate with a pile of fish, at which point Magik teleported him directly to the Danger Room, where he came even more distressed and panicked. Eventually, though, the holographic scenario of a desert island calmed him down enough that he could eat the large collection of fish. [New Mutants (1st series) #56]

Though they opted to keep him in the Danger Room for the time being, the New Mutants also decided to test Bird Boy’s social skills and take him with them to the mall for dinner and a movie. Bird Boy quickly developed a taste for fast food, in particular burgers, when he was taken out to the local malt shoppe. However, he soon went out of control and caused a big mess at the restaurant. The New Mutants took their friend to a movie theatre afterwards but, when an advert for burgers appeared on the screen, he flew towards it, thinking it was a massive burger for him to eat. Fortunately, Mirage was able to use her powers to make the audience believe they were watching a 3-D trailer. Afterward, Bird-Brain was teleported back to the mansion.

Bird Boy also became the fascination of Wolfsbane, due to her lupine appearance. He slowly warmed to her, but his insatiable appetite still caused him to be somewhat chaotic. In an attempt to mock his apparent limited intellect, he was dubbed Bird-Brain by a jealous Cypher. The winged creature resided in the Danger Room until Magneto, the New Mutants’ Headmaster, discovered him and identified Bird Boy as possibly being a mutant.

Regardless, Magneto informed his charges that they would have to hand Bird Boy over to the authorities. At that point, Cypher surprised Bird-Brain when he reluctantly agreed to try and communicate with him, and the two formed a mutual understanding. [New Mutants (1st series) #57]

Bird-Brain slowly began picking up words that Wolfsbane and Cypher taught him; he was particularly fond of words related to food and managed to repeat these in his own way, usually with a lot of “squawks.” He soon was able to use the words he had learned in combination, forming his own sentences. The more he learned, the better he began to fit in. He was even given his own New Mutants costume and recognized the New Mutants as his “friends.”

However, Bird-Brain became quite disturbed when he saw a lion tamer whipping a lion on television, as it reminded him of the tests back home. The New Mutants temporarily calmed him 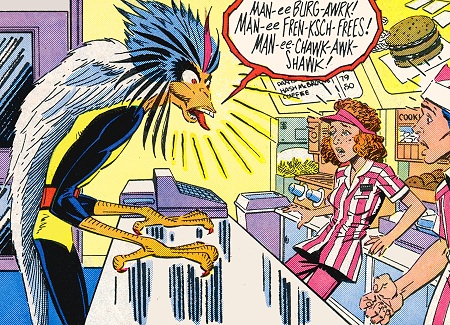 but, as the full moon appeared later that night, Bird-Brain once more was reminded of the testing back on Paradise Island. Unable to explain the danger that his fellow Ani-Mates were in, he secretly left Xavier’s mansion and made his way to a McBurgers restaurant, demanding burgers, French fries and shakes. Bird-Brain took the food he requested and flew off into the night, even though there was no possibility he could get back to the island in time. Luckily for Bird-Brain, the New Mutants came after him. With Cypher translating, Bird-Brain revealed the truth about the cruel tests to his new friends, and that his old friends were in grave danger. [New Mutants (1st series) #58]

Agreeing to help him, the New Mutants teleported with Bird-Brain to the mysterious island in the North Atlantic, where they were confronted by the Ani-Mates - an assortment of hybrid creatures 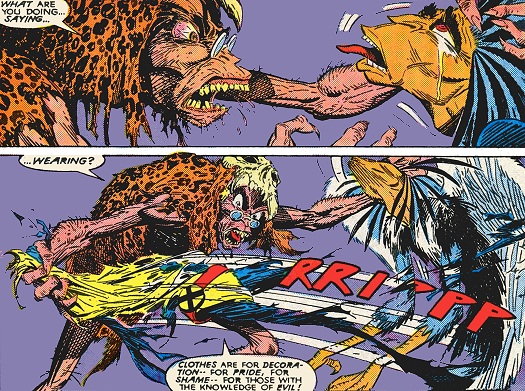 Before long, the New Mutants broke free from their restraints and engaged the Ani-Mator’s warriors. They planned to rescue Bird-Brain and the friendly Ani-Mates and teleport them back to the mansion, but Hodge 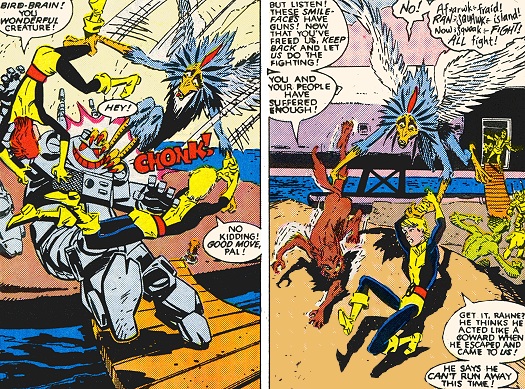 and the Right arrived, resulting in yet another fight. This time around, Bird-Brain did what he could to aid the New Mutants, taking a stand for himself and the other Ani-Mates. In fact, he even encouraged his fellow Ani-Mates to defend themselves, showing how much Bird-Brain had developed in the single month since he had fled the island in fear. Eventually, Bird-Brain confronted the Ani-Mator and overpowered him, right before Magik banished him to Limbo.

Once the battle was over, Bird-Brain declined to return to Westchester with the New Mutants, realizing that he belonged with the other Ani-Mates on the island. He even managed to explain his decision in a few simple terms, as Cypher, who had been killed during the battle, could no longer translate for him. [New Mutants (1st series) #59-61] 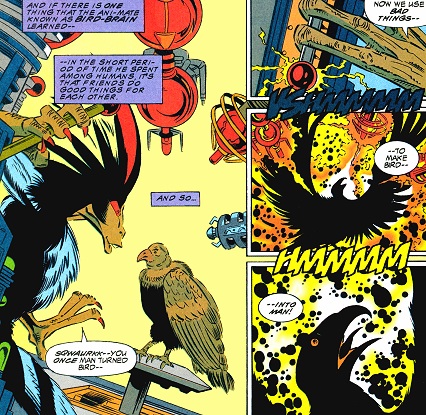 Some time later, Bird-Brain encountered a condor that arrived on Paradise, though he somehow sensed that it was no mere bird. In fact, the bird was actually an old foe of Nova’s called the Condor, who had been trapped in avian form. Bird-Brain had managed to master some of the Ani-Mator’s equipment on the island and used the devices on the Condor, with the intention of turning him back into a human.

However, the machine transformed him into a human/animal hybrid, just like the Ani-Men. Now more powerful than before, the Condor was not really happy with his new appearance, but he took out his anger on Nova instead of Bird-Brain. [Nova (2nd series) #3-5]

Months later, the Mutant Liberation Front took up residence on the Ani-Mator’s mostly abandoned island. Bird-Brain knew that Mirage was with the Mutant Liberation Front but, even though his former associate tried to make contact with him, he did not want to face her. Apparently unsure whether he could still trust her, he simply told her from the shadows that she had changed. [X-Force Annual #3]

In the years that passed, Bird Brain and the Ani-mates lived peacefully on the island, free from the outside world’s interference. However, their seclusion would also be a curse, as all the biological creatures and plants on the island started to get sick and no one was around to help them. The whole island was dying and the plague sent Bird Brain and the others into a delirious 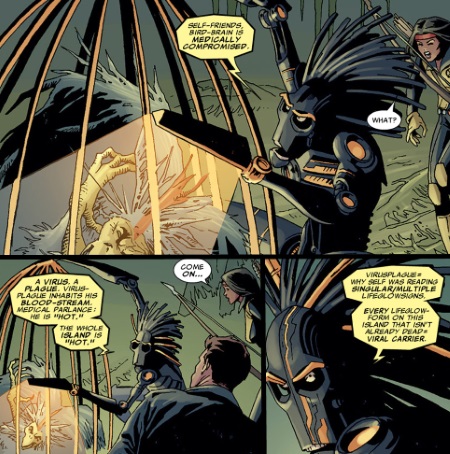 state. By chance, the New Mutants arrived on the island as Cypher, who had recently been brought back to life, wanted to confront the place of his death. Bird Brain spotted the group and attacked them, injuring many of them with his razor sharp talons.

Unable to get through to him in his feral state, Warlock captured Bird Brain and held him in a make-shift bird cage. Taking Bird-Brain with them, the New Mutants found the Ani-Mator’s old lab and fired up the equipment. They figured out that all the inhabitants of the island were infected with a virus that was designed to rebuild the Ani-Mator from available genetic material. Sure enough, a strange creature that looked like Ani-Mator soon attacked the group. Bird Brain, along with many of the New Mutants, was absorbed into this plant-like creature, empowering it further. It was thanks to a combination of Cypher and Warlock’s powers that it was defeated and Ani-Mator’s resurrection scheme was stopped. Bird-Brain was freed and cured of the virus, allowing him to regain his mental state. With the island returning to normal once more, Cypher revealed that he had reprogrammed the virus and now it would look after Bird-Brain and all the other Ani-mates. [New Mutants (3rd series) #38-40]