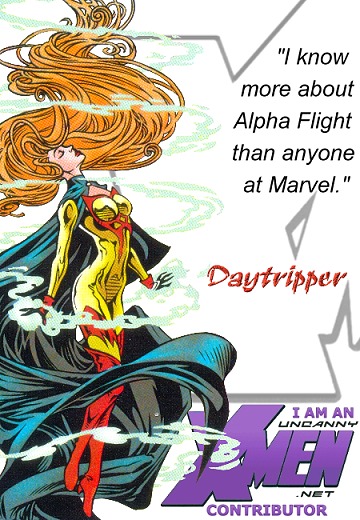 In the Brief:
Searching for "X-Men" on the Net in August 2002 gave me the website Uncanny X-Men.Net. Exploring the various realms of the World's Greatest X-Men Site, I soon became a regular contributor, with Alpha Flight (1st series) #1. Probably my greatest achievement at Uncanny X-Men.Net would be summarising the entire Alpha Flight series. But my contributions are many - hundreds of issue summaries (ranging from various Darkstar appearances, the second half of the first Excalibur series and dare I say it Chuck Austen's Uncanny X-Men), several Spotlight On…'s including Snowbird and Sasquatch, and updating the Where Are They Now? Article with my good friend Peter Luzifer.

History:
I was born in a smallish town in central New Zealand, thankfully my parents had the sense to move when I was young, which means I got to grow up in the great city that is Wellington. Stuff happened (as it generally does in a persons life) - my parents got divorced and my Dad moved to Australia, I finished school and went to university where I got my Bachelor of Arts in Media Studies and became a self-styled authority of the horror film genre. I'm currently working for the Ministry of Justice in as Personal Assistant to a Judge.

I purchased my first comic in 1997, and it just happened to be about a bunch of losers, hosers and posers from Canada - Alpha Flight (2nd series) #1. I guess you could say it was all downhill from there (or is that uphill???), as I began collecting back issues and reading the adventures of Canada's Premiere Super Hero team. It wasn't long before I got into X-Men, Avengers, the Defenders, Excalibur and so on.

Favourite Films: Mostly horror films - the Friday the 13th films, the Nightmare on Elm Street films, some of the Halloween's, Roadkill, the Grudge, the Descent, Feast, various others. Do enjoy some other genres, but not too fond of so-called Hollywood blockbusters.

Favourite Quotes:
"Life is a journey, one that is much better travelled with a companion by our side. But sometimes we lose our companions along the way and then the journey becomes unbearable". - Mary Alice Young (Brenda Strong) Desperate Housewives

"Is that necessary?" Amanda Sefton's response to being told to put on an X-Men uniform. [Uncanny X-Men #254]

"I never did it with a hero before...I wonder if they like to keep their costumes on..." - Gypsy Moth [Thunderbolts #67]

'"I'm the man Captain America is in his dreams!" - USAgent [Avengers West Coast #94]