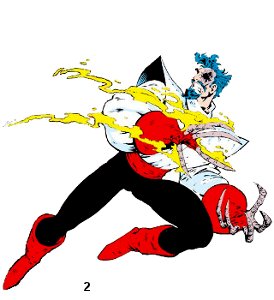 1) Black Tom Cassidy traditionally wears a purple or black one-pieced costume, with red gloves and boots. His costume tends to have a high and fancy collar as well as a symbol on his chest resembling a red winged cross, origins unknown. He also wears a circular red belt. Tom constantly carried a wooden shillelagh, an Irish walking stick that helped him get around and served as a conduit for his power. [X-Men (1st series) #101]

2) Black Tom updated his look after being implanted with viral wood fibers. His hands ended in branch-like claws and a portion of wood had grown into the socket of his missing left eye. His costume was mostly the same below the waist, but now he wore sleeved white tunic with flared shoulder tips. His gloves also could not properly contain his new fingers. [Deadpool: The Circle Chase #2] 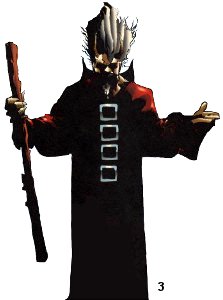 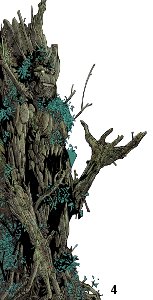 3) Tom's transformation into a complete plant-life entity gave him brown petrified skin and horns growing from his head. He wore a red robe with four clasps holding it together on the front, apparently covering for the fact that he no longer had legs, but was growing directly out of the ground wherever he had taken root. [Generation X (1st series) #25]

--) When he first reverted to human, Tom wore simpler clothing and did not use his original look again for some time. [Uncanny X-Men (1st series) #361]

4) Black Tom's next transformation into a plantform was even less human, resembling nothing more than human features being imprinted through a tree and branches. - [X-Men (2nd series) #161]