When Ruth Aldine was born, it became immediately obvious she wasn’t like other children. She was clearly a mutant and the X-gene had caused her to be born without eyes. Having a child with an obvious mutation put a strain on her parents’ marriage and, after a few weeks, Ruth’s father walked out and never came back. Her mother had to work long hours to be able to feed the family and so she would often leave Ruth in the care of her older brother, Luca. Seeing his father walk out because of Ruth caused Luca to build up a deep resentment of his sister. 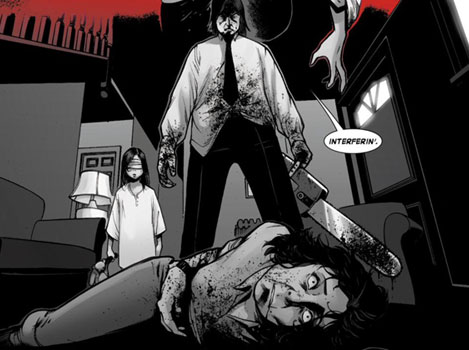 As she grew up, Ruth started to display other powers, which caused even more stress on the family. Luca's resentment towards Ruth caused him to begin physically lashing out at her. When he was in his teens, Luca became self-destructive and was soon sent to rehab for his drug addiction. While there, he latched onto sermons by a bigoted priest and started hating mutants even more. Though Luca was released as drug-free, his problems weren’t solved and he continued his abuse of his sister and his mother. Luca finally snapped and attempted to kill his sister with a chainsaw, but their mother intervened and died protecting Ruth from her brother. The years of abuse and violence had caused Ruth to see herself as the problem, so when Luca blamed her for making him kill their mother, she believed him.

Luca was caught by the authorities and was not only convicted of his crime but also sentenced to death. Ruth went to live with her aunt and the few years that followed were the happiest of her life. There, she could use her various gifts without feeling persecuted by anyone. 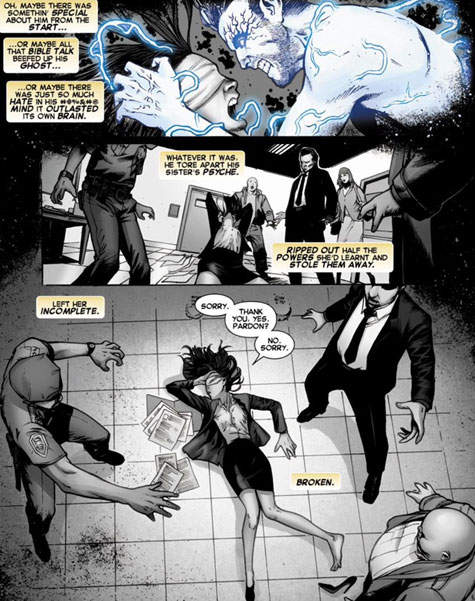 By the time she was in her early teens, it was time for Luca’s execution. Regardless of all the things he had put her through, Ruth felt she needed to be there as he died. She used her telepathy and gained access to the execution. However, as Luca was given the lethal injection, his own gifts emerged and his “spirit” left his body and attacked Ruth, stealing half her powers. After that day, Ruth was unable to talk in a clear and definitive way. She would always add words like “please, thank you, yes, no and sorry” into regular sentences, as if she had a form of Tourette’s. In fact, it wasn’t just her speech patterns that had changed; her entire psyche had fractured and Ruth found it hard to piece back together again. Thanks to her gifts, Ruth also had trouble separating the past, present and future into their proper order, since she perceived all three at once. Ruth’s aunt eventually received a call from the Xavier Institute and so Ruth was sent to a school where she could harness her gifts. [X-Men Legacy (2nd series) #5] 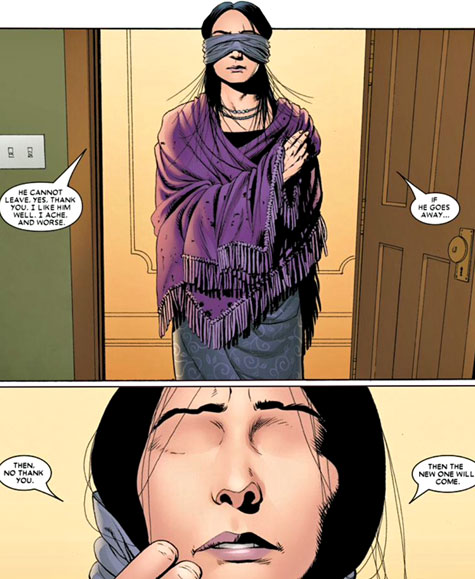 Ever since she was a child, Ruth had worn a blindfold to cover up her obvious mutation and it was this that inspired her new codename “Blindfold.” Whether it was her fractured psyche or the fact that her remaining powers were not suited for battle, Ruth tended to stay out of the limelight. However, one of the few remaining powers she did have was that of precognition. When she saw her friend Wing die and the robotic entity Danger being created because of it, Ruth alerted the X-Men. [Astonishing X-Men (3rd series) #7]

Things took a troubling turn when Blindfold foresaw that they were going to lose one of the X-Men. As Hisako was comforting her, they ended up getting dragged into a battle between Cassandra Nova and the X-Men. Most of the X-Men had been brainwashed and so it was up to Hisako and Blindfold to save them. Blindfold managed to use her psychic abilities to protect Cyclops’ mind from more confusion, allowing him to tackle Nova himself. However, Blindfold also ended up being confronted by Beast, who had been reduced to a feral state. 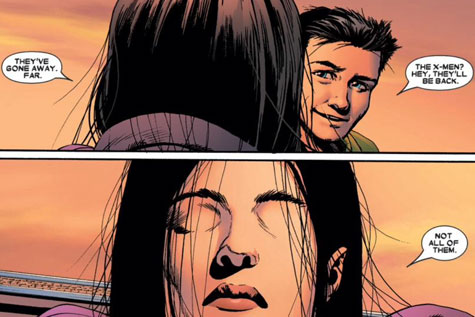 Fortunately, Cyclops had given her a box containing a ball of pheromone-soaked string inside, something which Beast had prepared in advance to use to bring his mind back to him again. Nova was soon defeated but the X-Men were almost immediately thereafter taken away into space by Agent Brand and her SWORD team. As they left, Blindfold remembered her earlier premonition that one of the X-Men would not be returning. [Astonishing X-Men (3rd series) #15-18] 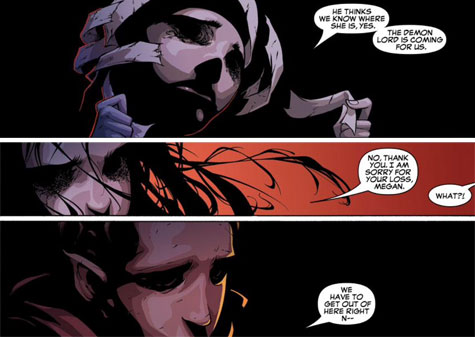 Ruth was one of the students who remained at the school after the Decimation on M-Day, although Ms. Frost excused her from combat training. [New X-Men (2nd series) #23] One night, the students at the school were telling stories to each other. When it got to be Blindfold’s turn, she recited the history of one of the former students at the school, Magik. As Blindfold was finishing the story, it became obvious that she wasn’t just telling them something that had happened. She was warning them that a threat was upon them. Before anyone could react, the students were dragged into Limbo, the realm ruled over by the demon lord Belasco. As the group navigated the perils of Limbo, Blindfold was giving them cryptic clues as to what the immediate future held for them. This seemed to annoy some of her friends, as she was being somewhat elusive with the exact details of what she had seen. Whilst Belasco was eventually defeated, many of the injuries Blindfold foresaw happening to her friends had indeed happened. [New X-Men (2nd series) #37-41] 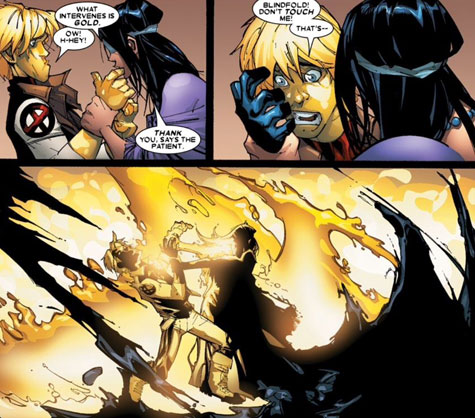 Not long after, Blindfold saw that something bad would happen to her, so she took matters into her own hands. Exodus and his Acolytes had been travelling around and killing any mutants with knowledge of the future. Foreseeing that they would come for her, Blindfold found Elixir, one of the other students, and grabbed both of his hands. Elixir had a mutation where his black skin could instantly kill someone and his gold skin could heal them. By grabbing both, Blindfold had effectively shorted herself out and she appeared dead. When Exodus and his followers came looking for her soon thereafter, they found her dead and continued on their quest. After Exodus left, the X-Men likewise assumed Ruth dead but Prodigy correctly guessed what she had done and they managed to resuscitate her. As she regained consciousness, she warned of another great threat about to descend on the X-Men. [X-Men (2nd series) #201-204]

When the first mutant after M-Day was born, multiple parties wanted to gain possession of her, each for their own reasons. After the chaos and the carnage of the chase, the baby was sent to the future to be raised away from those who would harm her. Unfortunately, Professor Xavier was seemingly killed in the final battle and Cyclops decided to disband the X-Men. [Messiah Complex crossover] 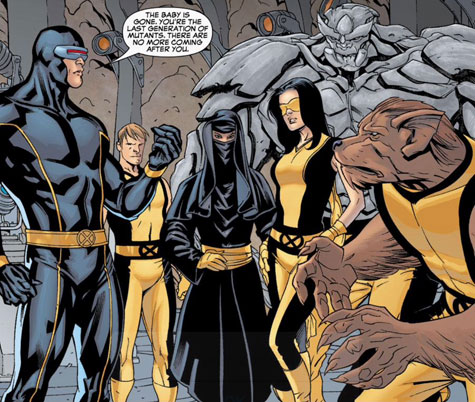 Ruth went back to living with her aunt again, but a vivid premonition of the future caused her to leap into action. In her vision, she was with a group of her friends (as well as some others she didn’t know) fighting the X-Men’s enemy Donald Pierce. The vision ended with the death of one of her friends, but she couldn't see who it was. Deciding to take action, Ruth traveled to the X-Men’s ruined mansion where she eventually met up with Rockslide, one of the students she saw in her vision. As she tried to explain her vision to him, Cyclops approached them and told Rockslide he wanted him on a new X-Men team. Rockslide refused to join unless Blindfold did also, and so Ruth was drafted on to Cyclops’ new squad. Gathering in the New X-Men’s Danger Cave, Blindfold met with the rest of her team and learned of their first mission. They were to take down Cannonball and the rest of the New Mutants, who had apparently become the latest Brotherhood of Evil Mutants. [Young X-Men #1]

The new squad trained for a number of weeks in preparation for their battle with the New Mutants. During their training, Cyclops was adamant that the team should use lethal force against the former New Mutants, a notion that didn’t sit well with the youngsters. Blindfold in particular was having more troubling visions and she spoke of a “wolf in the fold.” Eventually the time came to strike and Blindfold was paired up with her new teammate Ink to attack Dani Moonstar. The veteran New Mutant was taken by surprise but easily managed to turn the tables and take Blindfold hostage. Ruth wasn’t entirely defenseless, though, as she had been secretly communicating with another student no-one else had known about. The mystery student was Cipher, whose mutant power was to make herself completely undetectable, though she had chosen to reveal her presence to Blindfold. When Blindfold gave the word, Cipher knocked Moonstar out from behind whilst still remaining hidden. 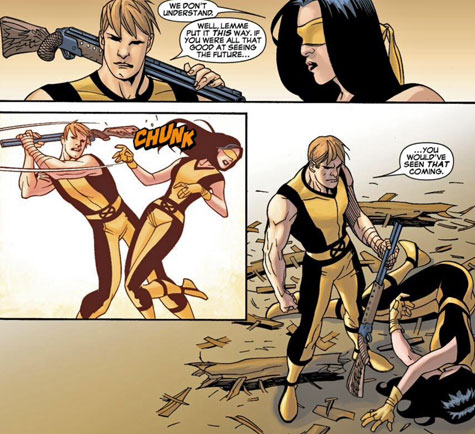 Unfortunately, Blindfold was unable to see that Ink was the wolf in the fold she had dreamt of and he knocked her unconscious when her back was turned. Choosing to monitor the situation rather than become involved, Cipher watched as Ink took the two unconscious women away. He took both of them to a mysterious third party who paid him for his services. When Blindfold eventually woke, she found herself locked in a cave and trapped with a very angry Moonstar. [Young X-Men #2-3]

In the meantime, the other members of her team had taken the fight to the remaining New Mutants. Eventually they figured out that “Cyclops” was in fact Donald Pierce in holographic disguise and so they joined forces to take him down and retrieve their missing friends. After escaping the cave, Blindfold staggered through the tunnels Pierce had been using for a base. Blindfold soon began to realize her earlier premonition was upon them but it was too late to do anything and Pierce killed her teammate Wolf Cub. [Young X-Men #4-5]

Afterwards, the group relocated to San Francisco, where the real Cyclops had set up base and restarted the X-Men. The group of teens were cared for after their ordeal and, in the wake of it all, Cyclops decided to keep the team operating. Since Blindfold’s powers were not designed for combat, she decided to step down as an active member. [Young X-Men #6]