In the main Marvel universe, Blink never got the chance to fully explore her potential. Here, she was already a teenager by the time the alien Phalanx kidnapped several young mutants, including her, to experiment on. She and the others had been taken to a freighter by Harvest,  one of the techno-organic members of the Phalanx collective. The odd grouping of Emma Frost, Sabretooth 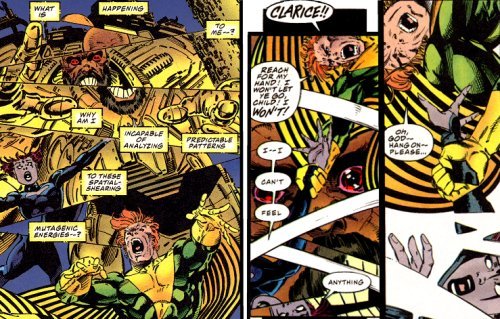 and the Banshee came to rescue the kids, but they didn’t fare any better against Harvest. Eventually, Blink took matters into her hands and created a teleportation effect bigger than ever before. Inexperienced in the use of her power, she got caught in a cascading wave of teleportational energy, and was torn apart just like the villain. Still, her noble sacrifice ensured the other kids’ survival, who moved on to become Generation X.

Some years later, Blink was among a number of deceased mutants who were resurrected by Selene on her path toward Apotheosis. Though she was undone in her quest, not all of her works perished with her and so Blink lived once again. She soon thereafter joined the X-Men. Read the complete Profile this Blink HERE.

The variant timeline depicted in What If (2nd series) #75 diverged in the exact moment when Blink used her power on Harvest. This version of  Clarice strained her powers and somehow managed to survive, though she found herself taken to a realm outside of regular reality. From 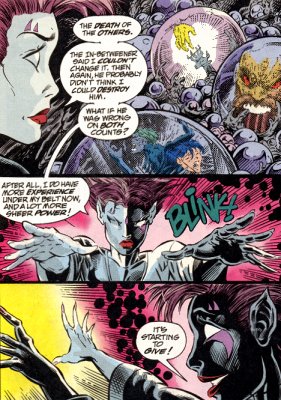 there, she could still witness the events on Earth, and to her horror found that, with her departure, her teleportation wave had expanded outwards and killed the other mutants aboard Harvest’s freighter. Turned out that the realm belonged to the In-Betweener, a godlike being who symbolized the balance between Chaos and Order. Blink found that from this place she could re-shape reality and, while, she changed certain events in the timeline so that the X-Men would have a bright future, she was unable to undo the event that had killed the others (as it was the same event that had brought her to this odd place). When the In-Betweener warned Blink not to mess with reality, she accidentally killed him and became his replacement. Eventually, her actions caused an imbalance and chaotic forces neglected too long crashed in on Blink and altered the timestream yet again, this time towards the other extreme. The In-Betweener re-appeared and, in exchange for Blink swearing an oath of non-interference, she was allowed to live on and become his apprentice.