After Maverick disappeared into Europe for a time, Chris opted to legitimately make a go at becoming a super-hero, hoping to do some good before he died and maybe help human/mutant relations by his actions. Leaving his parents a note that explained his decision, he packed up his things and ran away to New York City again. Dropping the alias of Brian Johnson, he got in touch with Donna once he got there and the two of them made up a Bolt costume for him to use. That very day, he heard on the radio about a super-brawl at the Genetech Research Facility, and set off to join in. He found a group of former New Warriors battling Blastaar of the Negative Zone, and successfully helped them defeat the menace. When Speedball proposed they take this as a sign that the New Warriors should be active again, Bolt and another newcomer named Aegis asked to join the team and were accepted on the spot. [New Warriors (2nd series) #0-1]

Unfortunately, Chris had another problem - he had almost no money and no place to live. After spending a few nights sleeping in Central Park and other open areas, he tried to crash at Donna's place, only to get caught by her parents in one morning. Eventually, Namorita found him sleeping on the couch in the New Warriors’ Firehouse Crash Pad, and offered him the spare bedroom in her apartment so that he had a permanent place to live. [New Warriors (2nd series) #2-5]

In the meantime, the New Warriors were battling all sorts of menaces, from regular street gangs to Genocide and her Eugenix organization. Chris acquitted himself well with the Warriors, 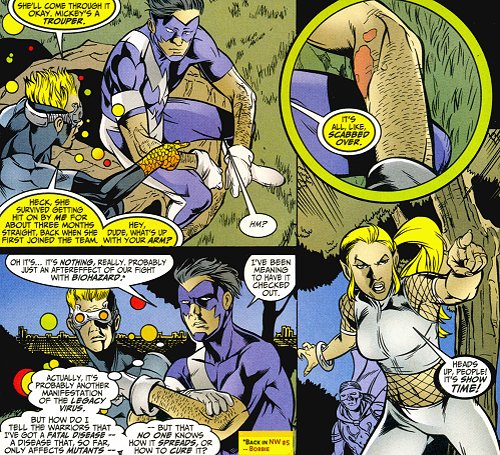 contributing to many of their victories. His only problem in combat seemed to be a trusting streak, which made him particularly gullible to certain tricks pulled by villains. The Legacy Virus started to become a liability for him, as well – he began developing scabbings on his back and arm, and his power flare ups started to happen more often than before. [New Warriors (2nd series) #6-7]

Shortly after Donna had a slip of tongue and almost revealed his infection during a night-out with the female Warriors, Chris decided to confide in Namorita about his condition and she promised to 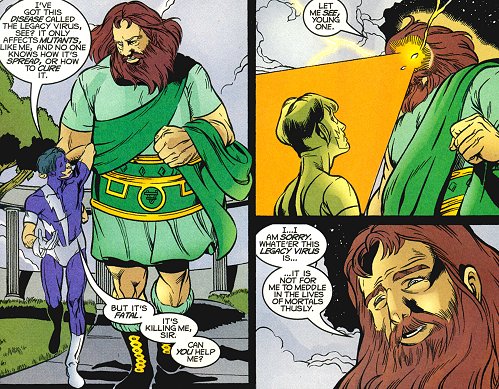 keep his secret.  When the Warriors briefly visited Olympus, Bolt even asked Zeus himself for help with his infection and, while the Greek god was sympathetic to Chris’ plight, he found it beyond his power to aid the young man. Not long thereafter, Chris eventually went ahead and confessed his condition to the entire team. [New Warriors (2nd series) #8-10] 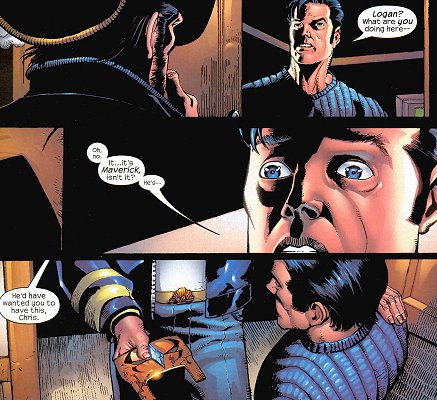 The New Warriors fell out of the spotlight for a time after that, and it is unknown when or why Bolt chose to retire from the team. Around the same time he apparently left the group, however, the X-Men successfully stumbled on a cure for the Legacy Virus, and it was released into the atmosphere, curing Bolt and all the other mutants still infected by it. [Uncanny X-Men (1st series) #390] Chris seemed to settle into a normal life after that, but his average existence was shattered when Wolverine came to his door, telling him of how Maverick had been killed by operatives of the revamped Weapon X Program when he refused to join up with them. [Weapon X (2nd series) #21]

Chris was furious over his friend's death and, despite promising to Logan that he wouldn’t go on a quest for revenge, somehow made a connection with Cable, who had started gathering an underground organization to oppose Weapon X. Chris had Cable train him vigorously in fighting techniques and, together, they created a new identity for him as Maverick, possibly in an attempt to unnerve the Program with rumors of one of their "kills" still up and around. Also, as Maverick II, Chris wanted to give homage to his friend's name, while seeking revenge for his death. Chris joined Cable in teaming up with Domino, Meltdown, and Blaquesmith as the core of the Underground, with only Cable knowing that he was not the original Maverick. [Weapon X (2nd series) #6-7]

They began rigorous surveillance on all known Weapon X operatives when they came out in public and, working with Domino, Maverick II managed to capture two propaganda agents for the program named Wildside and Reaper, who were stirring up anti-mutant sentiment to bring the 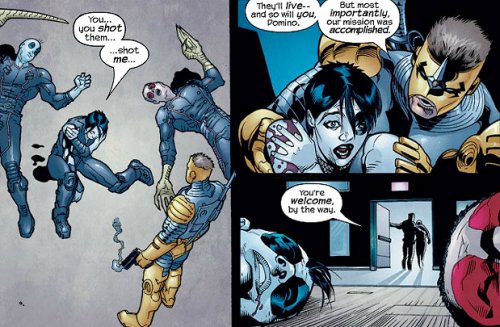 Program's actions into public favor. They managed to extract some information from their captives, using Cable's telepathy to bypass psychic blocks in their minds. However, the bypass not enough and the very act of interrogation rendered them mindless vegetables. Things took a surprising turn when a group of Weapon X agents led by Brent Jackson tracked down their headquarters and offered their aid in bringing down Weapon X's Director and his cronies. With the help of Jackson's followers, the Underground managed to infiltrate the Weapon X complex and take the fight straight to the Director. [Weapon X (2nd series) #8-11] 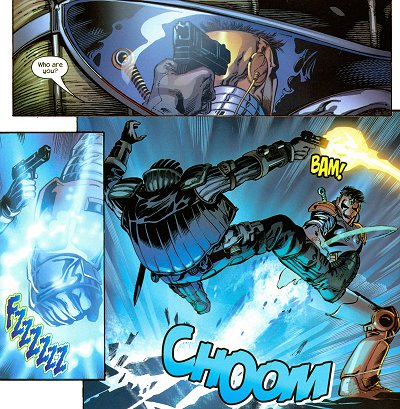 Chris didn't trust their new "ally," though, and split off from the rest of the group to explore the Program's corridors on his own. Lucky he did so, for once the tide turned his way Jackson unleashed a psychic weapon which disabled the entire Underground team. They were soon let back loose into the world, unwittingly spreading the lie that the Weapon X Program had been dismantled when in fact Jackson had simply taken over it for himself. During his solo escape from Weapon X's facilities, Maverick II was confronted by the most secretive of all Weapon X's agents, the man known only as Agent Zero. Unknown to Chris, Zero was in fact his old mentor, the original Maverick, who had been saved from his near-death by Sabretooth and forced into joining the Program under a very short leash. [Weapon X (2nd series) #12-13]

Zero was naturally curious as to who was posing as him, and quickly took up the assignment from Jackson to hunt down the new Maverick and another AWOL operative known as Marrow.  These 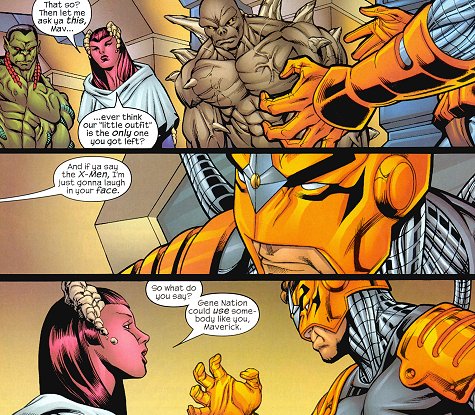 three paths quickly collided, as Chris discovered Marrow had stolen all Cable's data on the Underground after his memory-washing, and turned them into outright pro-mutant terrorist cells called Gene Nation. He was prepared to execute Marrow when her goons, Vessel and Hemingway, jumped him. Marrow made him the typical "offer you can't refuse" to join them or die, reminding him that, with Cable's Underground effectively gone, she was his only hope for getting allies to take down the Weapon X Program. Maverick II agreed to an alliance with Marrow, an act witnessed by Agent Zero, who was hiding in the shadows. [Weapon X (2nd series) #19]

Zero tracked Maverick to Grand Central Station, where the next Gene Nation bombing was supposed to take place. He got the drop on Chris and, when he made a threatening move, Zero shot him in the chest. It was at that point that Maverick II was able to get a word in, and point out 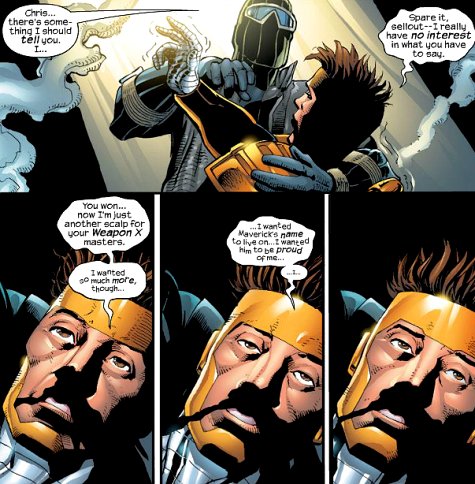 that he was going to shoot the real threat, a kamikaze mutant who successfully exploded herself and brought the station down on their heads. As he lay dying in the wreckage of the bus station, Chris confessed his reasons for joining the Underground to Agent Zero, and that he was only going along with Marrow long enough to bring her down. His last words were, “I wanted Maverick's name to live on... I wanted him to be proud of me...” Chris Bradley died there in Agent Zero's arms, perhaps blissfully unaware that the man who killed him, the man who sold out so totally to the Weapon X Program, was the very man whose name he was trying to honor. [Weapon X (2nd series) #20-21]

Years later, the mutant energy vampire Selene gained access to the techno-organic virus, using it to reanimate a number of fallen mutants as servants to her cause. Chris Bradley was among those mutant undead sent to attack the X-Men on their island of Utopia. [X-Force (3rd series) #22] Most of those mutants returned to their graves after Selene's defeat, but some are known to have survived. And with another mass resurrection of fallen mutants underway on Krakoa, it's only a matter of time before Bolt strikes again.