At great cost, the Captain Britain Corps was soon revived. Roma returned from death and Merlyn recovered from his madness to restore the Corps he once championed. It was through the reality-warping powers of Jamie Braddock that Merlyn was able to achieve his goals, though it sent Merlyn and Roma into hibernation to recover. Brian was overjoyed to be reunited with his brother, who 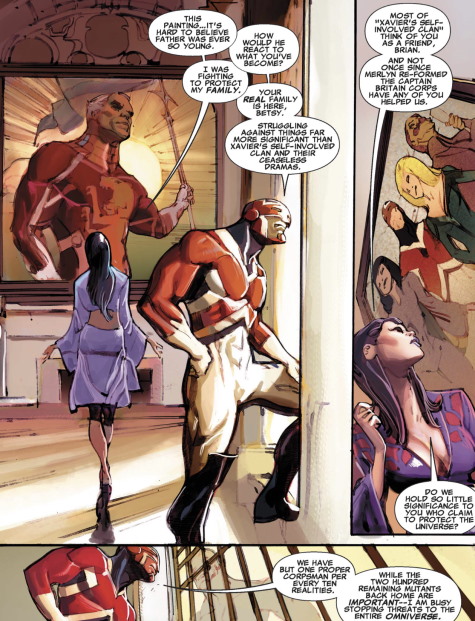 had moved past his own madness to become a force for good in the Omniverse. Captain Britain began operating with the Corps from Otherworld again on a regular basis. While his bond with his brother strengthened for the better, though, his connection with Betsy led to disaster.

As Psylocke experienced a psychic assault, it reawakened the old psychic link between the twins. Brian saw everything Betsy had gone through in the past few months, and was horrified. Psylocke had joined a veritable hit squad called X-Force, eliminating threats to mutantkind with extreme prejudice. One mission had taken the team too far, where they encountered the child reincarnation of Apocalypse. Betsy and the other members refused to complete the mission when they saw how young En Sabah Nur’s new incarnation was, but a rogue named Fantomex nevertheless shot the boy in the head. Fantomex was already wanted in Otherworld, so Captain Britain and Saturnyne had him abducted and brought forward to face trial while Brian tried to reason with his sister. 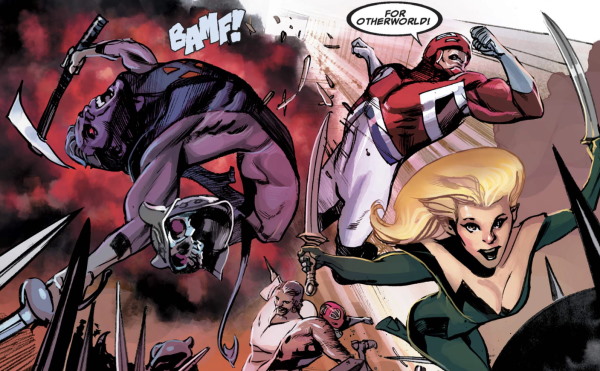 Brian and Betsy were immediately at odds over his heavy-handed tactics. Elizabeth challenged Brian over his lack of involvement in the X-Men’s problems before swooping in to judge them. Brian and Jamie explained Otherworld was under assault by a mysterious sorcerer called the Goat, and their time had been occupied with the war effort. Still, Psylocke was forced to watch as Fantomex was convicted before Saturnyne, with Betsy's own memories being drawn from Brian and used to convict her teammate. Psylocke intervened during the execution and fled with Fantomex. Brian could not pursue his sister because Meggan was being overwhelmed on the war front, and he was needed at his wife’s side. In time, the forces of the Goat breached the Tower Omniverse 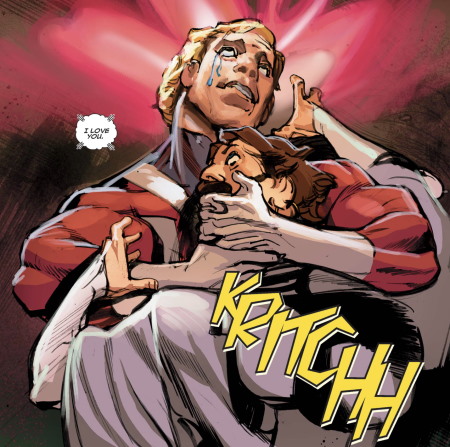 despite the combined efforts of Brian, Meggan, Jamie, the Corps and Betsy’s erstwhile X-Force allies. The Goat intended to access the Omniversal nexus and consume every reality with his parasitically propagating presence and influence.

Brian and Jamie were fighting side-by-side when Brian received a telepathic call from Betsy. She had uncovered the truth behind the Goat – he was actually a future version of Jamie, tricked into being possessed by the goat demon of self-propagation, Horoam’ce. The Goat-Jamie had traveled back in time to this moment, using a time travel platform and the Orbs of Necromon. He remembered the Corps was still rebuilding while Merlyn and Roma were absent, making it the perfect time to strike. The Goat had breached the nexus and was perpetuating his essence through the omniverse, consuming millions of lives by the second. Betsy explained the only way to stop the Goat was preemptively, by killing the younger present Jamie. Captain Britain refused to kill his innocent brother, who at that moment was fighting arm-in-arm with him against the Goat’s hordes and proclaiming how wonderful it was to have redeemed himself. With the sake of the omniverse on the line, Betsy tearfully seized control of Brian’s body remotely and used his hands to kill their brother before he became a threat to all life. The bitter irony was not lost on the Captain Britain Corps, and they revoked their judgment on Fantomex before Brian removed Betsy and her X-Force from his sight. [Uncanny X-Force (1st series) #19-24] 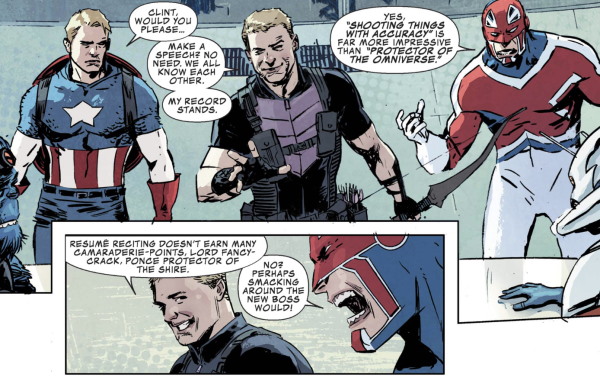 Despite his increasing responsibilities as a husband, MI-13 agent, and Corps member, Captain Britain soon accepted a full-time roster position among the Avengers as well. Captain America and Hawkeye offered him a place on the Avengers’ covert operations team, based out of the Lighthouse space station. Brian and team leader Hawkeye started off on the wrong foot, however, for the man who was literally powered by confidence initially assumed he was being recruited as the team’s leader. Captain Britain and the Secret Avengers confronted an underground society of cyborgs and androids known as the Descendants. [Secret Avengers (1st series) #22-25] Brian also had to deal with a civil war in Otherworld, though, splitting his time between different oaths. The Manchester Gods of Britain’s present came into conflict with the mythical elements of Avalon and Camelot that still held sway over the land. Captain Britain and King Arthur were ultimately forced to cede control to the gods of the new. [Journey into Mystery #639-641] 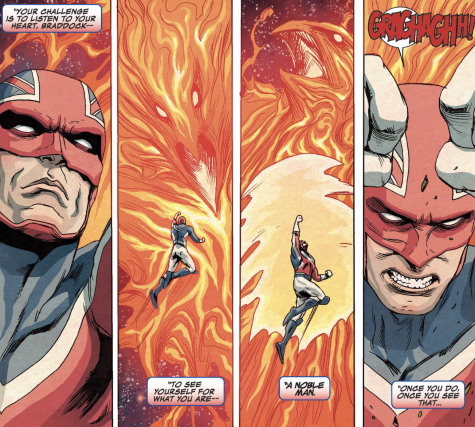 During the coming of the Phoenix, Captain Britain assembled with a team of Avenger powerhouses and scientists to prevent the cosmic firebird from reaching Earth and causing all manner of chaos. Its path of destruction through space strongly suggested the Phoenix was a threat to Earth, as opposed to its more benign period when it was hosted by Brian’s former teammate Rachel. Brian struggled to hold the balance between confidence and arrogance in his posture, maintaining his powers at their peak without exceeding his abilities. When Thor and War Machine failed to contain the Phoenix in an energy cage, Captain Britain flew out to use the trap himself, against the warnings of Hank McCoy. This valiant effort failed as well, and only served to damage the very device they needed for the plan, as Beast crossly pointed out. Still, Thor later counseled Brian on how to draw his self-confidence from a place of true nobility. Although they were unable to stop the Phoenix, Captain Britain did personally deter the Phoenix long enough to prevent it from destroying the Kree world of Hala. [Avengers vs. X-Men crossover] 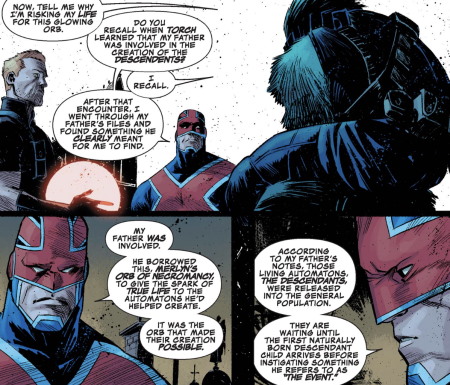 In his investigations of the Homo synthezoidous known as the Descendants, Brian uncovered that his father James was a member of the Weapon Plus research team that created them. Using the Orb of Necromancy from Merlyn’s stores, James Braddock had brought the spark of true life to the Descendants, but regretted it once the research team leader "Father" corrupted his work and turned the Descendants against humanity. After the encounter with the Goat, Brian had entrusted the Orb of Necromancy to the Avengers of Earth-666, a world where everyone was already a form of undead, and likely would have no need of its power. The Secret Avengers believed the Orb was still tied to the Descendants and could be used against them, so Hawkeye and Captain Britain went to retrieve it.

Unfortunately, the Avengers of the Undead had been inspired by dreams of expansion, and wanted to use the Orb of Necromancy to spread un-life throughout the multiverse. Fighting against ghost, werewolf, vampire, zombie, Frankenstein and mummy versions of his closest 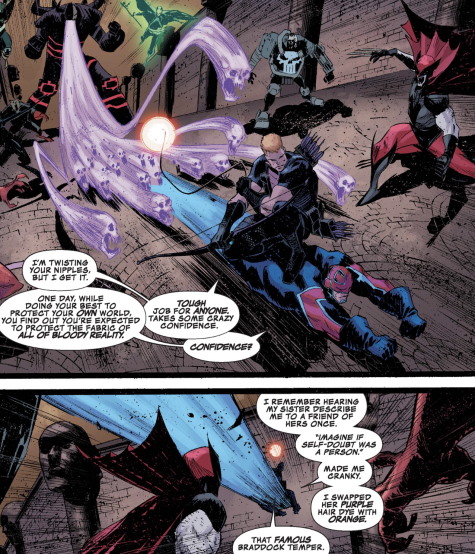 friends, Hawkeye questioned Brian’s choice of hiding place for the Orb. Still, he also admitted his respect for Captain Britain’s role as protector of the omniverse, and acknowledged how Brian must constantly be thinking on a much larger scale than other heroes. Captain Britain and Hawkeye outwitted the undead Avengers by using the Orb of Necromancy to restore the ghost of Brother Voodoo to life, making him vulnerable. Their covert team brought an end to the Descendants’ forced bio-technological singularity attack, but this Secret Avengers unit dissolved shortly afterwards. [Secret Avengers (1st series) #33-37]

In time, Brian and Elizabeth reconciled. Fantomex died and X-Force disbanded, leading Psylocke to take an oath to avoid killing in the future. Investigating the Descendants had led Brian to study the journals of their father, and how both the Descendants and Fantomex were linked to Sir Braddock’s work with Weapon Plus. Brian had come to appreciate the difficulties Fantomex operated under while having three independent brains, one of which was a mutant-hunting Sentinel. He forgave Betsy for defending the man, and the twins confided in each other once again. [Uncanny X-Force (1st series) #35]

Looking towards the future, Captain Britain organized the Braddock Academy with the aid of MI-13 and the British government to train the next generation of Britain’s mightiest heroes. The Academy was established at stately Braddock Manor, with Brian and Meggan overseeing the student body along with other lecturers like Union Jack, Spitfire and Elsa Bloodstone. [Avengers Arena #5] He remained active as an agent of MI-13, dealing with the fallout of the Battle of London Bridge when it appeared Mys-Tech was reforming. Captain Britain was taken captive by Death’s Head II on behalf of the Psycho-Wraiths, but the freelance peacekeeping agent ultimately sided with Britain’s heroes against the invasion from Hell. [Revolutionary War event] 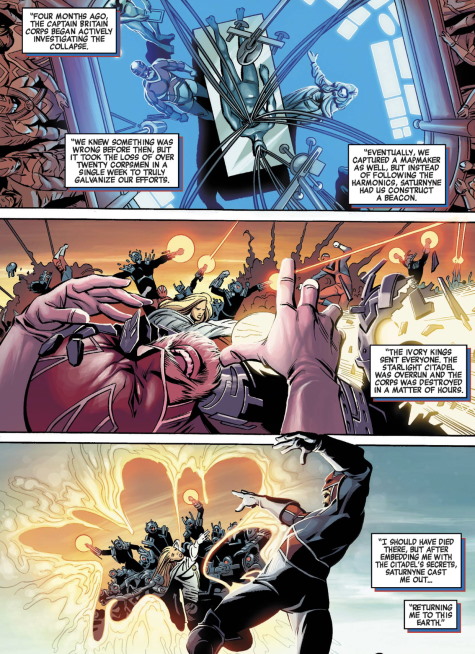 Brian Braddock became one of the later inductions into the Illuminati, in response to the Incursion crisis. An unnatural contraction of the multiverse was causing Earths to slam together, destroying both universes unless one Earth was sacrificed and speeding the end of all things. The Captain Britain Corps received rumors of the phenomena but failed to take it seriously until nearly two dozen Corpsmen were lost in a week. Roma and Saturnyne acquired an inert Mapmaker, representing one of the factions in the Game of Worlds being played during the Incursions. A buried signal found in the Mapmaker’s artificial intelligence proved to be a trap, drawing the Sidera Maris to Otherworld. Brian lost an eye and his entire support network was wiped out in the invasion. He only survived when Saturnyne forcibly expelled him from the Starlight Citadel, empowered with the knowledge of Otherworld to seek new solutions.

Captain Britain and the Illuminati were forced to live as fugitives during the final months of their existence. Before his recruitment, the Illuminati had stolen Captain America’s memories of the 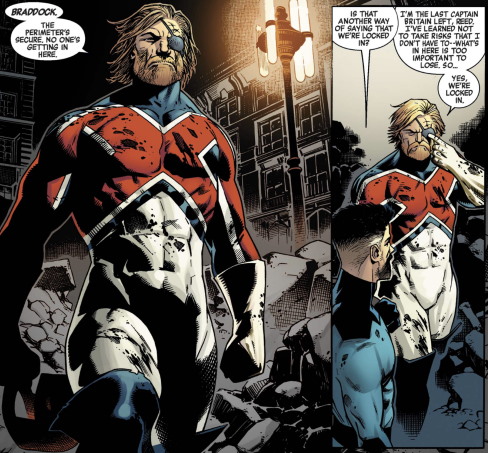 crisis when he wasn’t prepared to consider dark solutions to the problem. An awakened Steve Rogers commandeered S.H.I.E.L.D. to pursue his assailants with Ahab-like intensity, leading the Illuminati to explore their options on the run. Brian and the Illuminati finally sued for peace in Spain with Rogers, S.H.I.E.L.D. and different Avenger factions coming together. Peace did not matter, though, and no solution to the end of the universe could be found. As the final Incursion loomed between Earth-616 and Earth-1610, Richards and the Illuminati were instead building a life raft of scientists in the vain hope that the human race might somehow survive the end of all things. For reasons of his own, Brian Braddock chose not to put his name on the list of survivors, and resigned himself to his fate. [Time Runs Out]

The multiverse continued (after a fashion) with the birth of the Eighth Cosmos as a reincarnation of the seventh. After the re-establishment of Earth-Prime, the Future Foundation took the power of the Beyonders out into endless space and began restarting the many worlds of the multiverse. How this affected the reconstruction of Otherworld and the Captain Britain Corps was unknown at first, but Brian returned to his Earth and operated as a “local” hero for Great Britain once more. During Hydra’s efforts to take over the world, Captain Britain joined with the Champions of Europe and Euroforce as well as some displaced Avengers to fight against the fascist invaders. [Secret Empire event]

[Note: Secret Empire continued depicting Captain Britain with only one eye, as he appeared during Time Runs Out. Later stories, however, apparently ignored this as one of the details rebooted and deleted following Secret Wars.]