•Techno-organic modifications have integrated
his physiology with adaptive bio-machinery,
giving him superhuman strength, reflexes,
durability, nano-regenerative powers,
teleportation, force beams, mental domination
of others, and a "Doomlock" chronal variance
inhibitor that allows him to influence the
timeline without causing divergent timelines
to split off from his actions
•Original duplication abilities apparently lost
due to his techno-organic upgrade 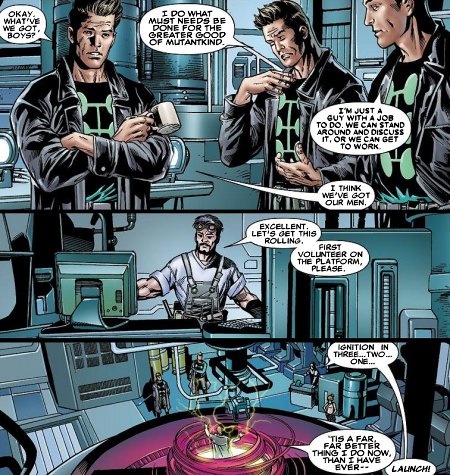 After M-Day, the mutant race was decimated and it seemed that Homo superior was headed to eventual extinction. However, just as news of a new mutant baby being born reached the X-Men, Forge reported to his allies that his sensors had detected two distinct future timelines in which mutant life signs could be detected. Needing intelligence on these two timelines, the X-Men leader Cyclops recruited Jamie Madrox, the Multiple Man. The idea was that he would create two dupes, each of which would be sent to one of the two timelines. After gaining the information they needed, the dupes would commit suicide, at which point their knowledge would be reabsorbed by the prime Madrox in the present. The man who would become Cortex was one of these two dupes. [X-Factor (3rd series) #25]

Cortex was the first of the two dupes sent through time. After he departed, the other dupe was transported to the second timeline, though the young Layla Miller unexpectedly hitched a ride along the way. While that dupe eventually died and his memories were reabsorbed by Madrox, the Cortex dupe never did the same, and was essentially forgotten in the chaos that followed. Whatever happened to Cortex, he was either unwilling or incapable of killing himself to return to Madrox. This might have been in part due to his transformation into a techno-organic being. A later comment by Cortex that he was “forged in the heart of chaos,” suggested an arduous ordeal that he barely survived. To that end, Cortex would later comment to himself that he no longer considered himself a “living creature” and was now no longer capable of creating duplicates of himself. [X-Factor (3rd series) #46] 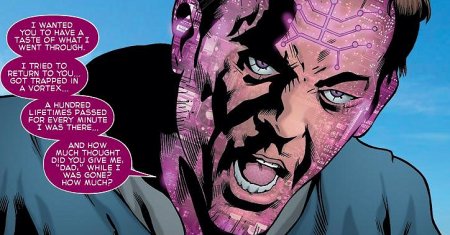 Unable to return to Madrox by killing himself, Cortex, as he now called himself, attempted to return via dimensional travel. Unfortunately for him, Cortex became lost in the vortex between dimensions. Time passed differently in the void, with a hundred lifetimes passing for every minute he was there. It was most likely this hellish experience that changed Cortex’s personality, leaving him a cold, nihilistic man and lacking empathy for others. [X-Factor (3rd series) #50]

Somewhere along this process, Cortex became involved with Damian Tryp. With the death of his past selves during his last encounter with Jamie Madrox, Tryp had become a temporal anomaly, existing simultaneously in all times but none. It’s possible that it was due to his unstable status that he was able to detect and rescue Cortex from the vortex between dimensions. The dimension Cortex materialized in was the second future that the other dupe had been sent by Forge. For the previous forty years in that dimension, Tryp had been shepherding Dr. Anthony Falcone to positions of higher authority and eventually to becoming the scientific advisor to the president of the United States. Tryp confided in Cortex his and Falcone’s plans to use Sentinels laden with hadron particles to pull mutants through a portal into the vortex between dimensions. It's possible that he was inspired by Cortex's own experience in the void, or perhaps he had discovered Cortex while researching his plan. Either way, Cortex was not to be an ally, but a pawn to Damian Tryp. Cortex later cursed Tryp for catapulting him across realities, tormenting him. Since Falcone, Tryp’s agent, would later employ technologies that would force Cortex to do his bidding, Tryp’s actions against Cortex were likely an act intended to break him, as to bend him to Tryp and Falcone’s will.

Aside from their plan to use the Sentinels, Tryp and Falcone set upon simultaneous, alternate plans. Due to his nature as a cybernetic being, Cortex could be armed with a mechanism known as a Doomlock, a device invented by Doctor Doom that would allow one to make alterations in the past without creating an alternate timeline. With the Doomlock installed, Cortex was sent back in time eight decades with the instructions to kill ancestors of those mutants resisting Tryp and Falcone’s Sentinels in the so-called Summers Rebellion.

Even though the Doomlock allowed him to make alterations, Cortex opted to carry out his assassinations indirectly, to avoid taxing the timestream unnecessarily. One aspect of his techno-organic nature allowed Cortex to possess other people, which he called his “avatars.” These individuals could be possessed either remotely or through touch, and with a tendency to speak Cortex's name when while doing his bidding. Cortex could also imbue these avatars with a techno-organic appearance, possibly giving them more abilities or powers than they would normally have. Additionally, Cortex could “multitask,” controlling multiple avatars at the same time. 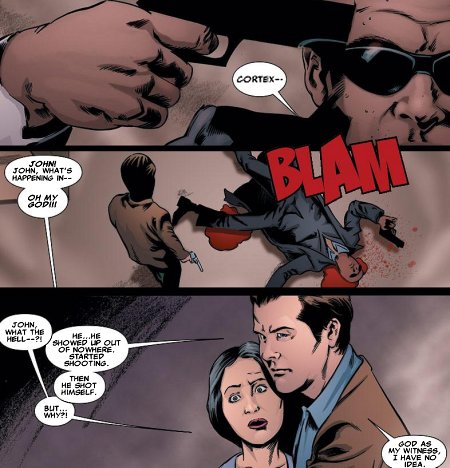 Using one of his avatars, Cortex attempted to kill his own progenitor, Jamie Madrox, tracking him to a church in Vermont where another of Madrox’s dupes (Reverend John Maddox) had built his own life. However, just before the gunman’s arrival, Madrox was whisked into the future by Layla Miller, who had remained in the future timeline and grown to adulthood. His primary target was absent, so Cortex’s avatar attempted to kill the reverend but, when John gained the upper hand, Cortex had the avatar kill himself. [X-Factor (3rd series) #41]

By chance, Reverend Maddox encountered another of Cortex’s avatars days later when he was visited by Guido and Rictor, who had seen the news story of Maddox’s attack and, realizing he was a dupe, had come to investigate. This time, the target was Rictor and Cortex utilized a far more powerful avatar, Shatterstar, whom he had taken possession of after encountering him in the vortex.

Cortex seemed on the verge of a successful kill when he was contacted by Falcone via a link allowing real-time communication across the decades separating them. Cortex attempted to rebuff Falcone’s communique, explaining that, though his attention capabilities were considerable, they were not infinite. Falcone, however, was adamant in his need to speak, as he had become aware of Jamie Madrox's arrival in Falcone’s time, rather than being killed by Cortex in the past. Unfortunately for Cortex, Falcone’s insistence led him to transmit a pulse through the link, painfully forcing Cortex to respond. Due to Shatterstar’s extra-dimensional nature, Cortex’s hold over him had been tenuous at best and Falcone’s pulse had now effectively severed that control. Though annoyed, Cortex nevertheless seemed unconcerned and quite confident that he could find another way to dispose of Rictor, who had been a low priority target anyway. [X-Factor (3rd series) #43, 45]

Simultaneous to his attack on Rictor in Vermont, Cortex was working toward the assassination of a higher priority target in Detroit, Lenore Wilkinson. Though she was just an ordinary human, one of Lenore’s descendants would be the mutant Hecat’e, a powerful member of the Summers Rebellion. Cortex had already killed a friend of Lenore’s, apparently using her as an avatar and murdering her via a self-inflicted gunshot. Knowing her friend hated guns, Lenore grew suspicious and became more so when she began to believe various people were stalking her. By happenstance, Lenore was already a previous client of X-Factor Investigations and she went to them for protection. Though they were dubious of her claim, Longshot volunteered to stay with her at her apartment and thus was present to thwart the attack of another of Cortex’s avatars, this one Lenore’s mother. [X-Factor (3rd series) #41-42] 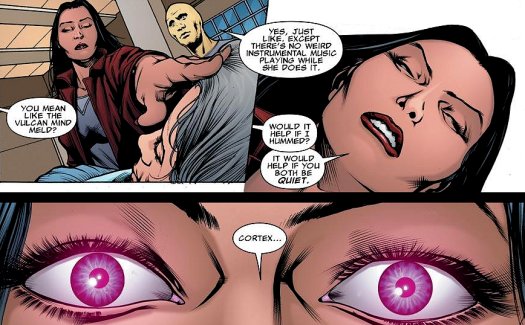 Again, Cortex attempted to have his avatar kill itself, but Longshot’s luck intervened and Lenore’s mother survived when the gun backfired. However, when X-Factor visited Lenore’s mother in the hospital, an opportunity arose for Cortex when Monet attempted to probe the woman’s mind telepathically. Through this telepathic connection to the avatar, Cortex was able to gain control of Monet’s mind, turning her into an avatar. 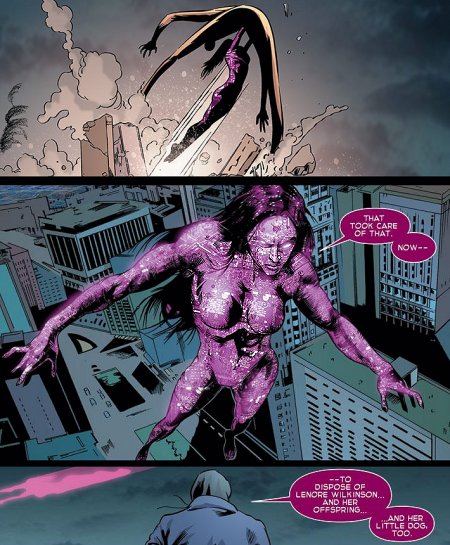 At first, Cortex attempted to use Monet’s super strength to attack, but quickly opted for something more subtle. Pretending to be Monet, Cortex volunteered to help guard Lenore from further attack. However, Cortex tipped his hand when he attempted to have Monet seduce Darwin, who was clearly infatuated with her. Knowing she had no similar feelings for him, Darwin resisted her advances, forcing Cortex to reveal his involvement. Transforming Monet into a semi-techno-organic being, Cortex fought first Darwin and then Siryn, Longshot and even some Omeganoid Sentinels accidentally sent back from Falcone’s future, due to complications with Tryp's plan at that end of the timeline. [X-Factor (3rd series) #43-44, 46-47]

Even when the fight was joined by Rictor, Guido and Shatterstar, Cortex was clearly confident in his ability to defeat the group and fulfill his mission. This seemed demonstrated when Shatterstar severed Cortex’s forearm, only for Cortex to regenerate it effortlessly via his techno-organic abilities. However, the battle was abruptly ended when Cortex suddenly found himself teleported back to the future, summoned by Doctor Doom via Cortex’s integrated Doomlock. More inexplicably for Cortex, Doom had used his technology to rewrite Cortex’s command systems while he had been in transit and so he was now programmed to follow Doom’s commands. Though Doom seemed to have fallen in with Madrox and the Summers Rebellion, this was not the case, and Doom immediately ordered Cortex to kill all of the mutants. Despite acting against his will, Cortex gladly complied, immediately murdering Trevor Fitzroy. [X-Factor (3rd series) #48-49] 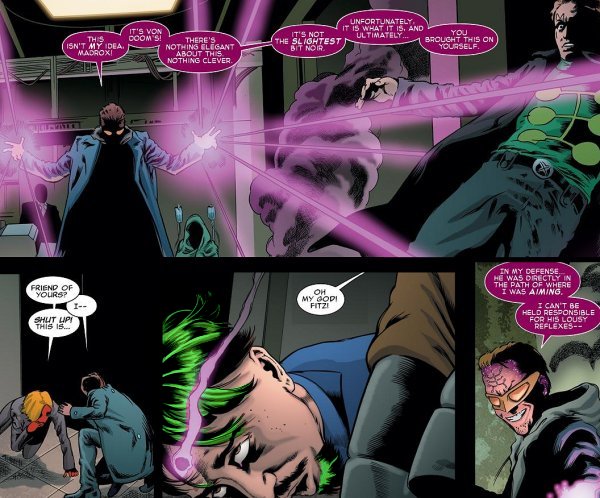 Much as he fought against X-Factor in the past, Cortex fought reservedly in the future. While he did effortlessly kill, such as when he reduced the mutant Salvé to ash, Cortex was more interested in toying with his enemies. There was no fun or challenge in a quick death, he told Madrox. Additionally, as he knew of Falcone’s plans regarding the hadron particles and how they were to be used to pull mutants into the vortex, Cortex preferred for his foes to be subjected to that same hellish fate he had endured, rather than delivering them a relatively painless demise. Nevertheless, this did not prevent Cortex from shooting his progenitor, Jamie Madrox, three times in the chest with a handgun.

It was at that time that Falcone’s plan came to fruition. Five massive Sentinels landed nearby but, instead of attacking, they merged into one immense Mega-Sentinel, which opened a portal to the vortex from which Cortex had been lost so long before. Unaffected by the draw of the portal, Cortex gloated at the imminent banishment of Jamie Madrox, until he was suddenly accosted by the resurrected Trevor Fitzroy. Brought back from the dead by Layla Miller, albeit without a soul, Fitzroy required a person from whom he could drain lifeforce in order to generate his own teleportation portal, and for this task he chose Cortex. 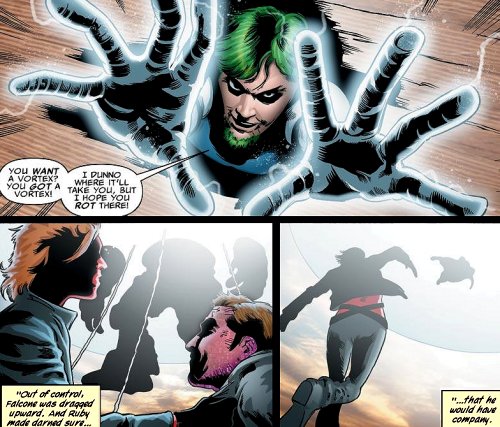 Staggered by the drain from Fitzroy’s grasp, Cortex could not stop Ruby Summers from crippling the Mega-Sentinel or stop Fitzroy from banishing it through a time-portal. Likewise, he was helpless when Ruby Summers then hurled him through the portal after Falcone and his Mega-Sentinel. Though Falcone emerged through his portal four decades in the past, it’s unknown if Cortex emerged there as well, or if he emerged at all. It’s quite possible, as before, that he is lost in the vortex between dimensions, experiencing the hellish fate that Falcone and Tryp had envisioned for the mutants of the Summers Rebellion. [X-Factor (3rd series) #50]

Death of Wolverine: the Logan Legacy #1