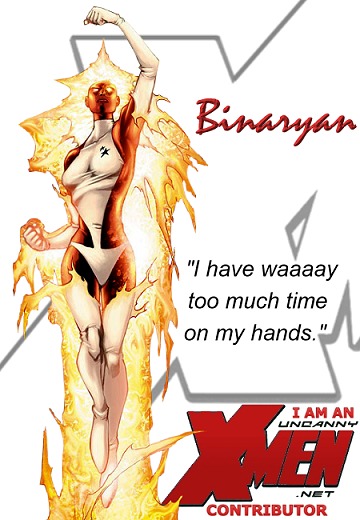 In the Brief: :
I’d been dabbling in comic websites for about five years with solo character sites for Warbird/Ms. Marvel/Binary and the short-lived Avenger, Silverclaw. When creative changes in the Avengers title left me a bit unsatisfied, my interests drifted back to the X-Men. I’d long been an admirer of UncannyX-Men.net and had used it extensively for background research for my own sites and my dabblings in online role-playing. I also had some success with the Gene Game character creation which got me involved in the Forums. In short, I loved the place and seeing as how it’s easily the best X-Men resource on the Net I decided I wanted to be a part of it!

History:
I was born in the armpit of California known as Bakersfield and grew up largely in that region of California. In my youth, I took to community theater and reading voraciously as a means of escaping the doldrums of life in a hopeless redneck town.

While at summer camp in my twelfth year, I came done with a severe case of the flu. This kept me confined to my cabin while the other campers were out hiking, swimming and having a ball. My camp counselor was gracious enough to loan me the pile of comic books he had brought with him to help me pass the time. During that week in bed, I devoured issues of GI Joe, Transformers and a little title called the Uncanny X-Men. I loved them all, but the colorful spandex-clad superheroes were clearly my favorite. When I got back from camp, I began compiling a list of every superhero I could find and buying comics off the spinning racks at my local liquor store.

It was also around this time that I began to realize that I was gay. Now being gay and living in a small town like Taft where my family relocated didn’t fit so well. Like many gay comic readers I’ve met, I identified deeply with the X-Men and the plight of mutants. I understood what it meant to have to hide a piece of who you were from those you love for fear of rejection. When the world got too much for me to handle, I would retreat to my comics and hang out with my “friends” Ororo, Kitty, Kurt, Piotr, Rogue and Logan.

I escaped Taft in 1990 and attended college at the University of California at Davis where I studied English and History. I came out of the closet and my world did not
collapse. But I still enjoyed my comics obsession. During college I got sucked into student activities and leadership and ended up attending graduate school at Oregon State University to obtain a Masters’ degree in University Administration. I have been working in the field every since and am currently the Assoc. Dean of Students at the California College of the Arts.

I have a loving partner (who I’m still trying to indoctrinate into comics) and an eleven-year-old son who I adopted when he was just four weeks old. My life has been a bit of a roller coaster. But the one constant in my life has been my comics. That Wednesday trip to the comic book shop is still something I look forward to each week.

Lines I love:
“Life is too important to be taken seriously.” – Oscar Wilde

"I've heard it said / That people come into our lives for a reason /
Bringing something we must learn / And we are lead / To those who help us most to grow / If we let them / And we help them in return.” – Stephen Schwartz from WICKED

“I’ll have what she’s having.” – When Harry Met Sally

“There's only us, there's only this / Forget regrets or life is yours to miss / No other course, no other way / No day but today." - Jonathan Larson from RENT

“I’m looking for baggage that goes with mine.” – Jonathan Larson from RENT

“Wishes come true, not free.” - Stephen Sondheim from INTO THE WOODS